This week is the first time we have employed ORBAT Locking, this communication will explain simply what it is, why it's here and how it effects you.

If you'd like to discuss, the contribtion channel is #j6-training-and-sop on discord

What is ORBAT Locking?

When viewing a Order of Battle (ORBAT) which lists all the availible positions, UNITAF members are able to select which roles they wish to deploy to, ORBAT Locking refers to the restriction of the access to certain roles based on two primary restrictions; Rank and Training, this is now live and you may see some different functionality when looking at an ORBAT.

The below image shows new functionality, whereby the role of Squad Leader requires the rank of Sgt (as shown in orange) as a minimum rank. In yellow the button reflects this requirement and disables your ability to deploy to this role. hovering over this button will display an explainantion.

Rank locking above the rank of Private is currently only applied to Field Leadership Roles, recruits can access most fireteam roles, some - such as Combat Engineers, Grenadiers etc require you to be at least a Private.

We have added a 'Roles' directory to the operations center, where you'll be able to view the requirements of all roles outside of an ORBAT. It's accessable via Operations -> Roles or you can click here to open it

When you make the rank of Private, it is assumed that you understand the core policies and SOP of UNITAF, but sometimes new SOP may be added to IETC, or you may be marked down for demonstrating a lack of understanding of basic SOP, in this case, you'll loose access to any role which requires any rank other than Recruit, as seen below, this shows my deployment screen based on my IETC having some red-checks on it, restricting me to some basic fireteam roles.

Note hovering over the button will explain the issue to me, clicking the button will take me right to my IETC profile, so I can identify the issue, speaking to an instructor or my COC will easily fix this.

We have added a 'Roles' directory to the operations center, where you'll be able to view the requirements of all roles outside of an ORBAT. It's accessable via Operations -> Roles or you can click here to open it 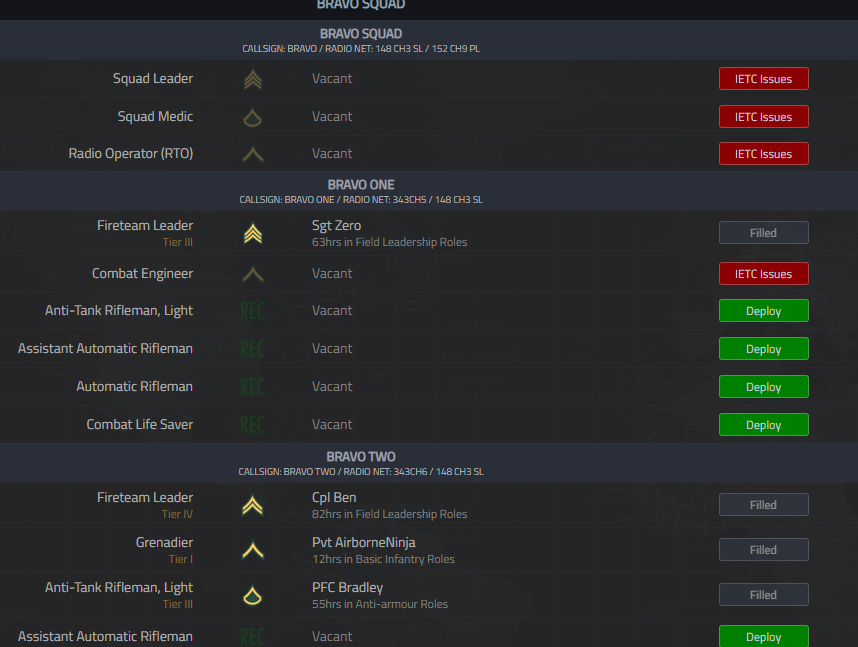 In the future, beyond the initial Phase 1 roll-out of ORBAT locking, we will add further requirements to advanced roles, expect to see this tie in with the training system for medics, pilots and special forces units, including marksmen, leaders, snipers and so on. We will monitor the effects of Phase 1, and keep everyone up to date on Phase 2 roll-outs.

The primary purpose of ORBAT locking is to improve gameplay by ensuring that any person in a role is at least competant at it, it ensures brand new members can't automatically allocate critical mission roles and prioritises and rewards those whom have trained in a role to be able to access it before those who haven't. It's principle role is to promote and encourage the use of the training system, and the employment of SOP. In the future it will also be used to give a larger variety of weapons and gear to those who have progressed the training system too.

"One-upping" - Playing Roles you're locked out of

One-upping is a process of requesting to take a role you're not qualified for by contacting the leader (FL) of the operation and asking them. One-upping is encouraged task-force wide, it allows you to practice roles. Future fireteam leaders are encouraged to "One-up" in official operations, you can "one-up" into any role at any time by asking the ops FL.

The FL is not required to approve your "one-up", but as always, we will do our best to accomodate requests, the best way though is to work towards meeting the requirements of any role, which will mean you'll always have access to it.

Finally, One-upping allows us to make sure when new members are trying roles for the first time, that we can strategically place experienced members around them.

If you'd like to discuss, the contribtion channel is #j6-training-and-sop on discord