Earlier today an ACE3 update was released which fixes a number of long-standing bugs, contains improvements but also has some wide ranging changes that will impact our operations - the most important are marked red. This updates details those most relevant to us, this update will present new challenges during operations and will require some additional SOP and SOP revisions in the future so please ensure you look it over.

If you are interested, you can find the full changelog here: https://steamcommunity.com/sharedfiles/filedetails/changelog/463939057

Vehicle crews more easily take damage both during collisons but also when a vehicle takes incoming damage. Vehicles are less likely to explode and appear to catch-fire more easily. Vehicles which are critically damaged appear to set fire, explode and set everything around them on fire too, including the crew. This update also appears to fix the long standing issue where vehicle crews survive vehicle explosions.

This will mean lost vehicles will critically injure vehicle crews going forward, with the added complication of fire - see below for more on that one. It is likely we will invoke a new policy in that exploded vehicle crews will be killed and returned to base.

It is now possible to light people and objects on fire, and have it spread, cooking off vehicles will ignite occupants. Fire will burn you and cause intense pain. If on fire, you can stop, drop, and roll to try and extinguish it. When in rain or under water you are put out quicker. This also adds an interaction to pat people out if they are on fire via the ACE medical, torso actions. Be careful when putting fire out on other people, as the fire may spread onto you.
We forsee a challenge where unconcious people are on fire, but this will need operational testing to determine future SOP.

Visual indicators for Splint, Fracture and Torniquets now show in the HUD, if enabled as shown below. 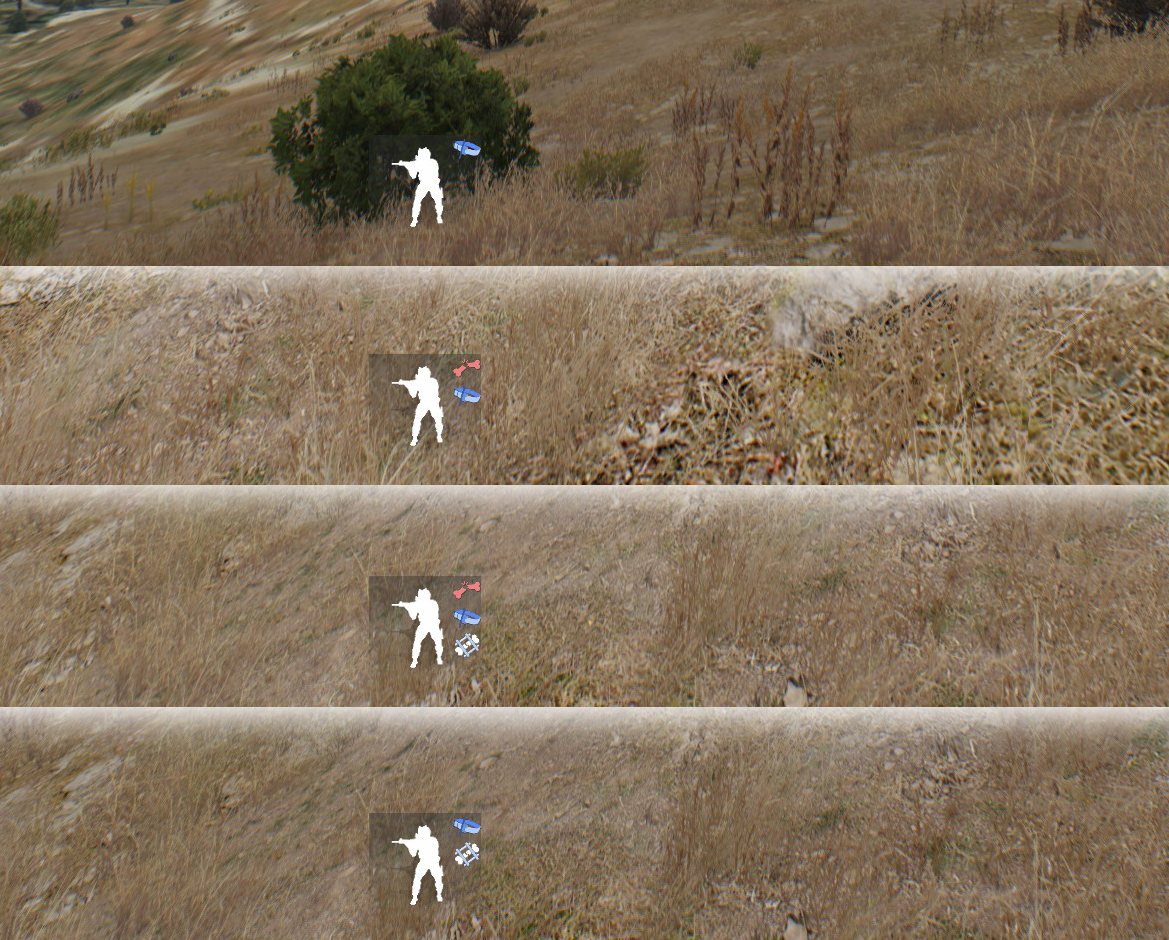 Give it a descriptive name of what's inside, i.e. the contents or whom / callsign it belongs to.

This makes LOGPAKs in ACE cargo, very easy to identify.

Group leaders can now set their own group names, reflecting on CTAB and BFT. This remains as SOP, but this is currently done by GMs, however it is now possible for the FTLs and so on to set their own callsigns per the ORBAT, also allowing for some BFT flexibility for vehicle crews etc to set theirs for seperate tracking.

ACE have added their own towing mechanic, currently our towing is handled via the user action menu, however ACE's version has some noticable differences - the first is that a vehicles size and weight is taken into consideration, and therefore bigger vehicles are generally needed to tow smaller ones.

ACE also requires you have a rope of some kind in order to tow, two smaller lengths of rope have been added.

With a rope in your inventory, action menu the towing vehicle to attach a rope

Select where on the vehicle you'd like to attach it

Walk to the towed vehicle and again, select where to attach the rope.

The HUD will now show your stance/speed, making it easier to tell between combat and standard pace.