While it's only been 2 days since I last issued a UNISTAFF update, we've been so busy I'm issuing another one to mention a some new shiney things.

In my recent update about ORBAT Locking (Phase 1) I said we would be releasing a new area to the Operations Center called the roles directory this was released yesterday and I hope it proves really useful to both new and existing members alike. Below I'll point out a few features of it, and then mention some future plans we have for it too.

You can find it via the Operations Menu first and foremost 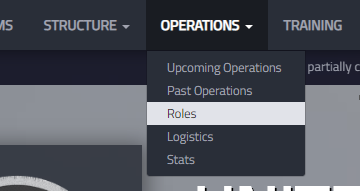 Or in other handy places, like next to ORBAT positions or ORBAT skill areas, just click on them, and it'll take you to the role directory, and then land you on the role you clicked on

We also put it in other handy places you might see role names, like for example - on your past deployments page in your dossier.

The purpose of the Role Directory is to list every active role we can place on an ORBAT, grouped by skill area, so you can navigate the areas using the menu on the right hand side.

What's really great though, is we've written up a short bio for every role, so you can read up on the roles your interested in, and it'll really help to de-mystify some roles, and help you decide what roles you'd like to pursue (or avoid!) Some other things you'll find are:

In the future the plan is to add loadouts to the roles directory, so you can see all the default loadouts we use, right here on UTFN - which we hope will help us improve those, too. 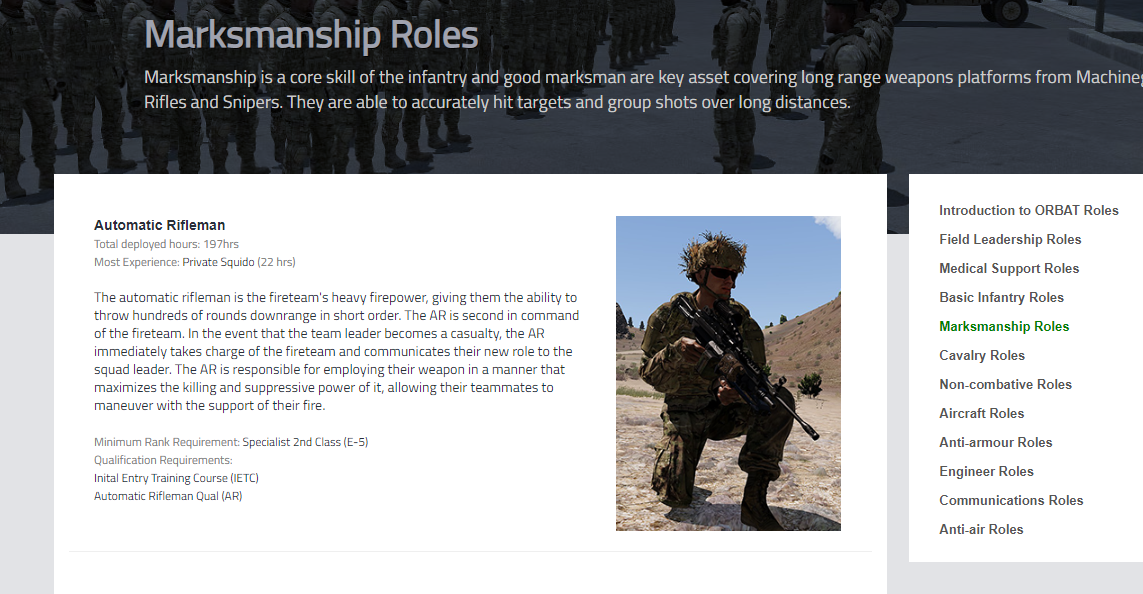 Obviously part of getting this out is heavily tied in with ORBAT Locking, we need to have a directory so you can look up the requirements for all the roles, right now - Qualification Requirements are not forced, but rank is. These aren't finalised, and we will re-balance the requirements according to feedback.

The eagle eyed among you will notice that some of the new roles in the roles directory require some new ranks, namely:

You can find out more about these on the Ranks and Structure page by scrolling down to them, there are some basic descriptions of what we intend to use them for, the details will be finalised soon. I was conscious that we only had 2-3 ranks for non-leaders, and I wanted to bring some in so that in the long term, we have a more visible way of representing experience for non-leaders, and rewarding those for embarking on the future (coming soon) advanced trainings.

Do read about them on the link above, I will note though that all these new ranks irrespective of grade, are still out-ranked by Corporals in respect to the chain of command.

Most of you are familiar with the way in which the COC works in UNITAF, if not you can head over to the COC intro to read up on it. Anyway, we realised that since most members are either inactive or active the rank distribution was slightly off, so we have re-issued the guidance on the number of subs each leader can take in the COC, Corporals are now 5-6 versus 6-10, and we've opened up a little breathing room to bring a new Corporal on board - which we need to do as we sometimes struggle for team leaders, so the NCOs are fielding candidates as we speak - so if your interested, speak to yours!

This week I also asked Sgt Kevin to step into a Cpl role - which was nonpunitive - I am conscious that Squad Leaders are few and far between, in doing so I promoted Cpl SoapyTarantula to Sergeant, to reflect both acitivity but the most likely candidates for these roles. Soapy has also Field Lead a few operations over the last few months, and I'm sure will continue to do so as we grow.

Finally, we have updated the COC Charts and Roster Lists, by removing a bunch of members who have not played within 60 days, which is the upper limit for Reserves, this is mostly automatic, but I think all you should know is;

That's all for now.