In the last few moments, I pushed the biggest update to our website since launch, the bulk of which is outlined below, but many other things are included too.

Over the last month or so I've been fairly busy working away at the bulk contents of this announcement, but what I will cover in this update from UNISTAFF is the overhaul to the training/practice system we have released today and why we have done it.

This really is quite a substantial change to a system we invested heavily into, but it became apparent in late January that it was too complicated to understand and also overly convoluted. Further to making it simpler to understand, we also needed to double back on one of the things UNITAF is about, which is not doing things for the sake of doing them, and having a reason behind everything we do.

To that end, we have completely replaced the training checksystem, qualifications and schools system that has been implemented until now.

Part of the feedback on the old system was that it was too focused on getting people to pass, rather than actually or genuinely focusing on getting better at a role, or practicing some procedure.

The old training schools view has been replaced with the new roles based view, it uses the same 11 role categories that the ORBAT and Roles directory uses, and so from this view, you can now see / link to all the roles, your progression in these areas, and to the SOP 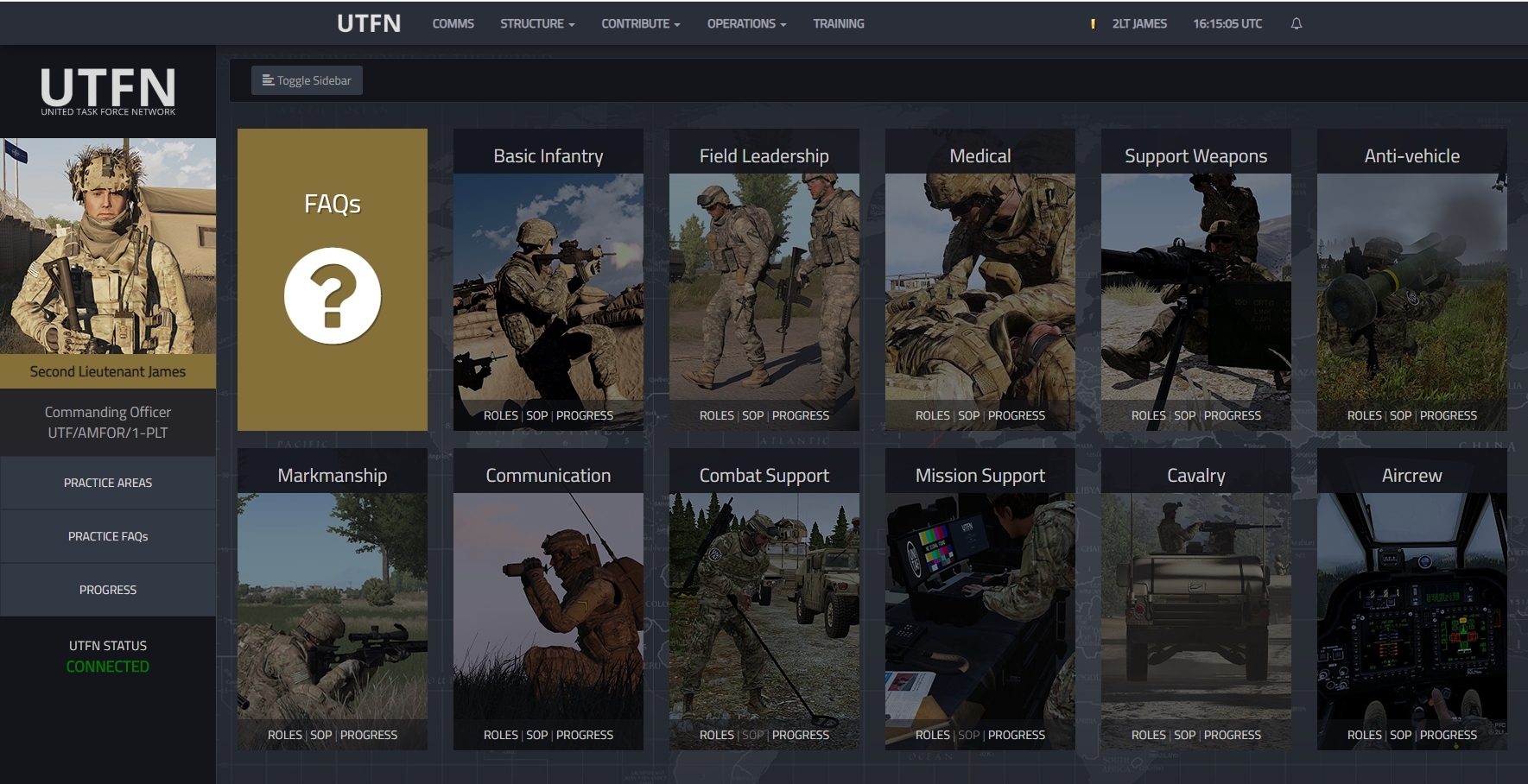 Clicking on SOP on any one practice area will take you to the SOP view, instead of having SOP per role, SOP is now grouped entirely by practice area, and is generally (hopefully) easier to navigate, link to and to understand. 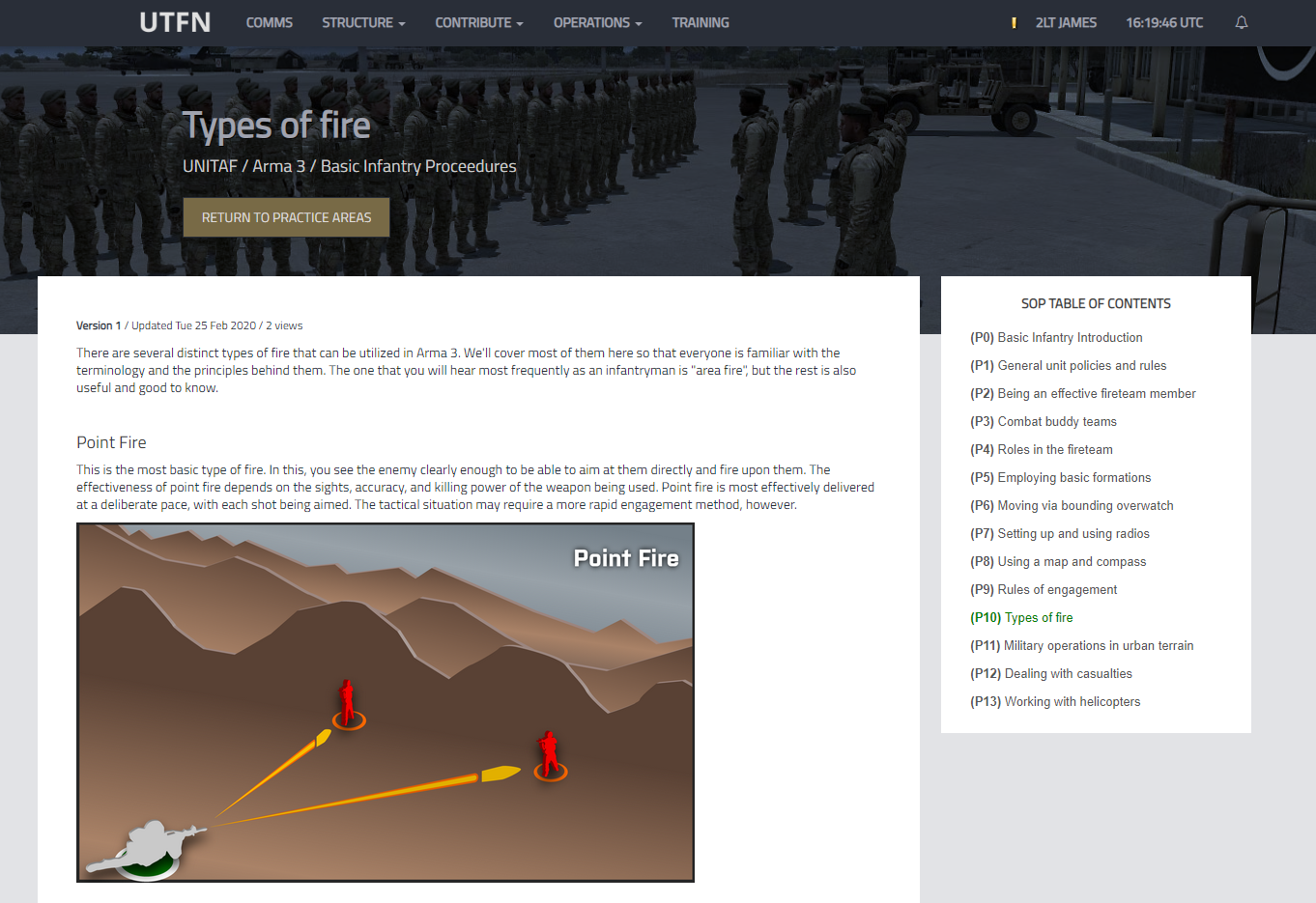 This is designed to act as a reference point, should you wish to read up on SOP, but it's not required. I'll come on to that in a moment. 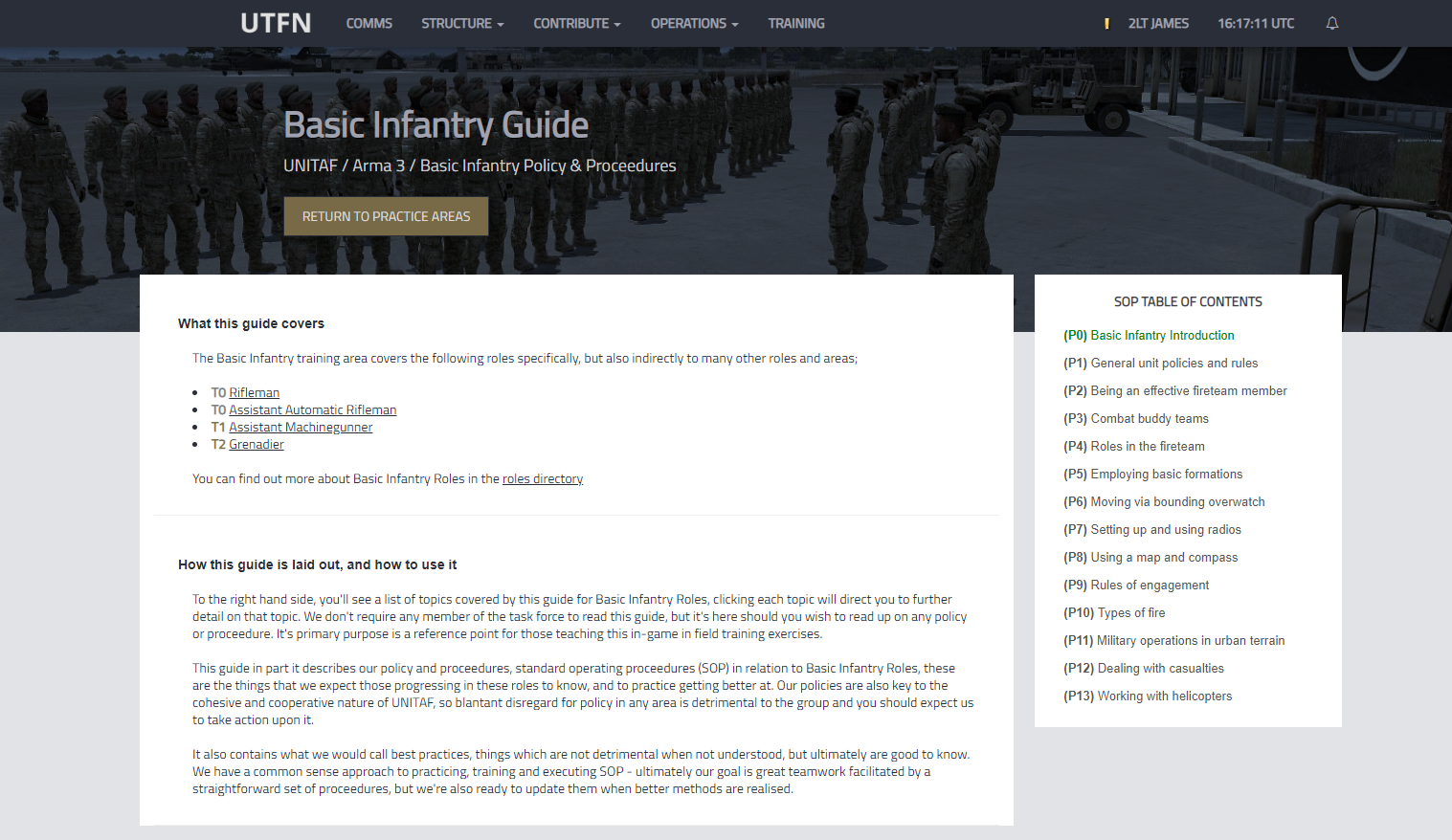 I mentioned before we've sacked the qualifications system, we've actually replaced it with something that was already there, the Tier system, before the Tiers worked on Positions only, and now we've moved them to work on Areas alone. In simple terms, to 'Tier Up' in an area, it takes a combination of hours playing in that area, and then hours practicing that area, the more you have, the higher the tier, the higher the Tier, the better roles you unlock (for official ORBATs anyway)

The roles directory splits roles into Tiers, as you can see here. 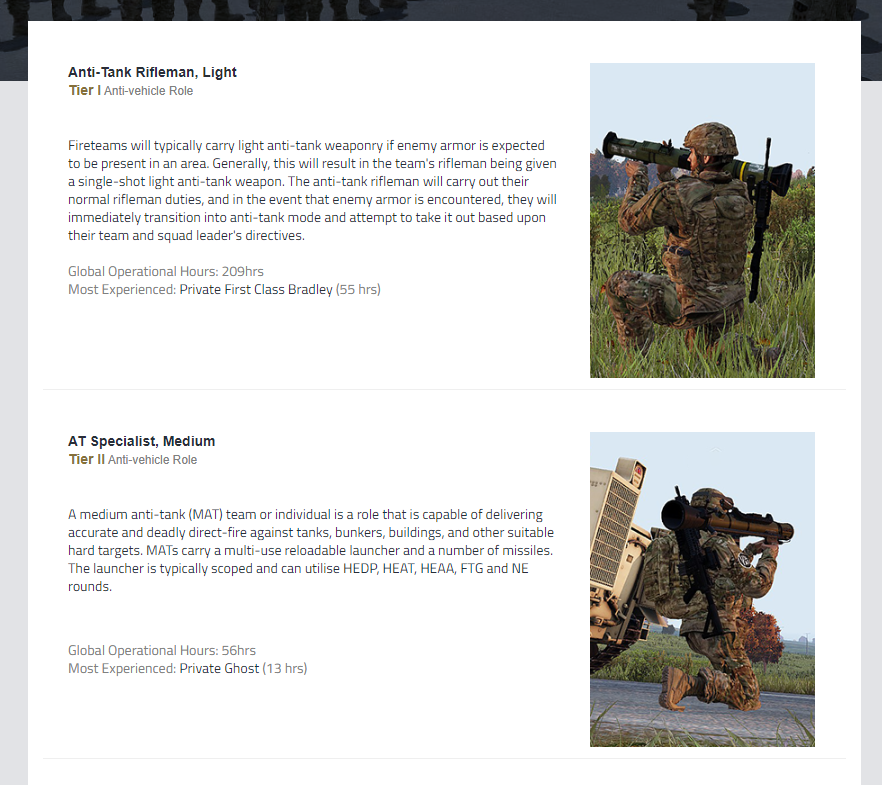 As a general rule, the higher tier you are in an area, the more specialist roles you can take, you'll also get to work in smaller detachments and take bigger guns, basically.

How do I know / see how I'm progressing?

Great question, you can do it two ways, either from the main practice view, and clicking on Progression on the area you want to look at, or via a new section of the Dossier called 'Practice Record' - which is neat, because it means you can spy on everyone else's progress too.

Here is my progress in each area - clicking on the progress button will take us over to detail on that area.

So below, we can see each relevant Tier, anything it requires, unlocks and your progress in it, as I said before we want people to get experience and practice in areas, and so the entire system is designed to reward time spend doing and time spend practicing.You can also see a log of where those hours have come from, be that from Operations or indeed Practice Operations.

You may notice that some areas have multiple roles that contribute to them, so for example, an hour spent in support weapons or anti-vehicle, automatically gives you an hour in basic infantry as well. Likewise, an hour in Field Leadership gives you an hour in Communications too. This is because they are so closely matched in experience (but not visa-versa)

Up till now, we've done 3 FTX's, and none for the last 8 months, an operation basically designed to get better at or practice something that would be difficult to do in a official operation, where we're focusing on objectives. We will commit to hosting 2 per month from now on, one will be specifically for the NCOs, which we've already hosted one recently, and also for people interested in becoming an NCO, and once per month also, which will be for all to attend.

A practice op format is basically that the first 45 minutes covers procedures, practicing of something specific without generally getting shot at, or rather in a rinse/repeat format. It will be followed by the normal duration of mission content, but instead the mission is designed specifically around the thing being practiced. In short, we're focusing on getting better, rather than on the objective. I'll talk a lot more about FTX's soon, but I hope you all attend them, we will do our utmost to make them as enjoyable as operations, and in actually doing them - operations will get better too.

Practice operations have a SOP / Training Order rather than an OPORD, it'll list out the Areas being Practiced and also the specific SOP being covered, useful so you can find out if it's of use to you. 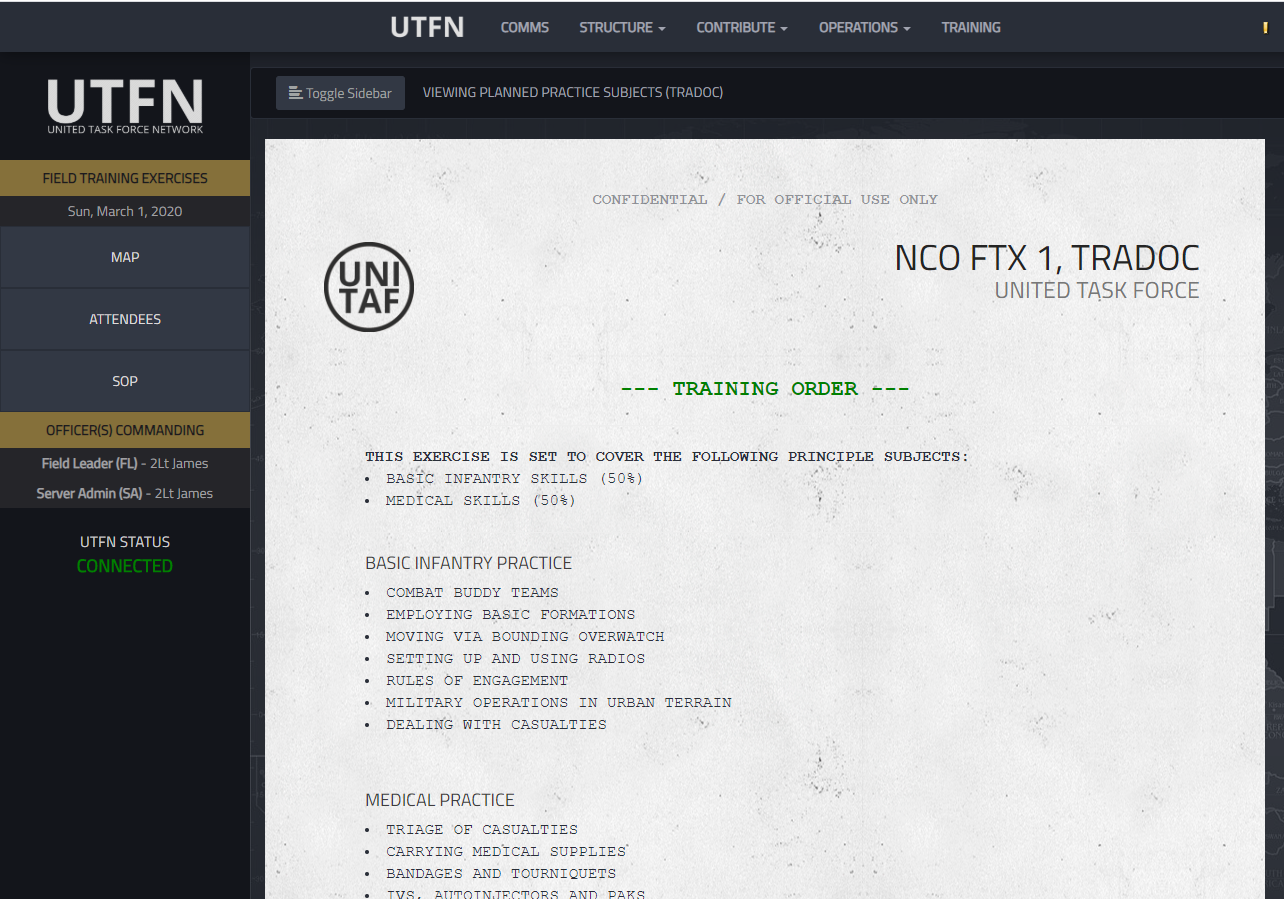 Who can run FTX's?

FTX's are no different to any other operation, so long as a NCO is present, anyone can run an FTX, be it with 2 people or 20. You just need an NCO to set it up for you. Then it's just a case of picking the subjects, deciding how you’re going to practice them and then off you go. If you want to practice with a friend, that's fine too - this is very much a self-learning system, where we practice together, using the SOP as a reference.

A final note on SOP

I have spent the last month or so making sure ALL SOP for all roles, areas and possible scenarios is published, and that process is now complete, with very few exceptions (Zeus etc) we've also added more roles to the roles directory.

Future Plans for Ranks/Promotions and Arsenals

While not finalised, coming very soon we will be able to confirm a few future plans that link into this update;

It's taken a lot of work to get to this point, I hope it's been worth the investment, and I want to thank everyone who contributed their concerns with the old system, but also who have helped design, test and implement the new one. We will of course keep tweaking to feedback, but for now - I hope to see you in a FTX soon.