What a fantastic week it's been, the public server has been massively popular and we're looking forward to hosting our first 'scheduled' public server night later today (Saturday June 13).

Over 25 of the active force have already tried it out and over 200 hours have been logged this week alone, with the Top 10 as below: 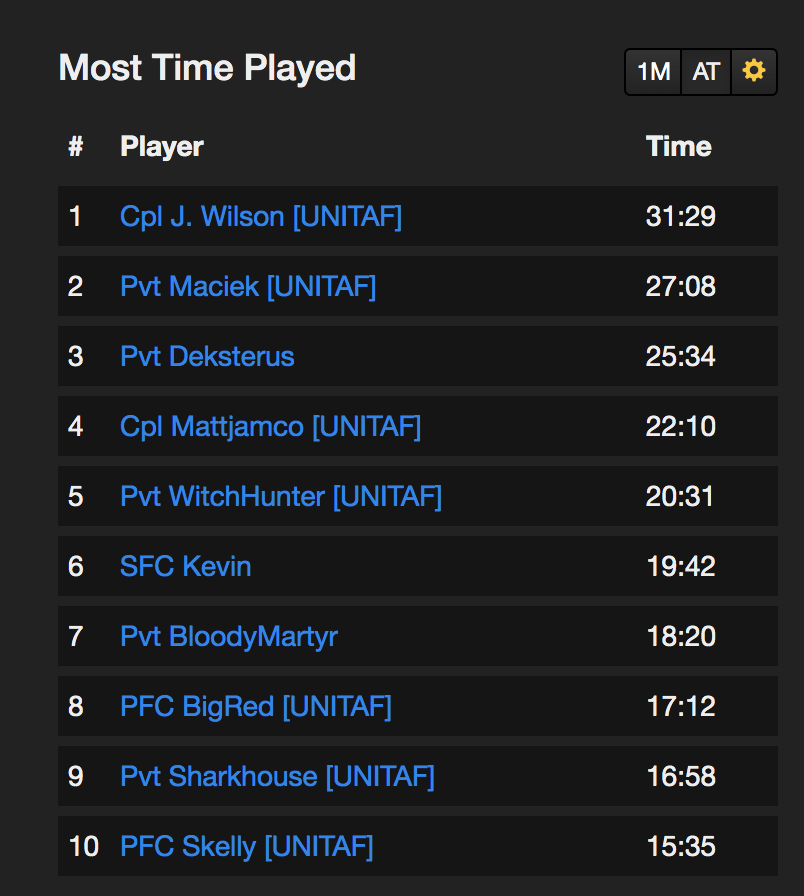 As you should know by now, the Liberation ongoings are reguarly posted in the #j11-liberation-server channel on Discord, and all of the suggestions have been collated over on our development site contribution center over at http://docs.unitedtaskforce.net/project/view/19/ - an update was rolled out in the week, but we will be putting out a further update today - prior to tonights session.

Please do keep the comments coming on Discord.

As you should know, for Saturday night we've organised into the official schedule a Liberation session, this is a loose session with no ORBAT where we have advertised the start time and date, but we welcome anyone to join at any time over the course of the evening, so don't feel like you must join on the dot.

We expect people to slot in the lobby and play the role as slotted, there are no restrictions and we also expect people to play in teams using general proceedures, but this should be no different to normal Liberation server options as I have seen it.

We're looking forward to seeing how it goes, and if it's well recieved then we will continue to schedule them to promote mass public server action - to hopefully pull in some new members too.

I always encourage the staff to promote and support activity like the above, so to properly support you with that, we've added a new Event type to the operations center. This event type sits alongside casual and official operations, but instead has no ORBAT, simply just a Coming / Not Coming toggle, so you can indicate your intent to rock up to these kind of events, as mentioned above.

Above you can see prior to me indicating my attendance, and below after - note it only shows the number of those who have RSVP'd

The eagle eyed among you will also notice it's being utilised for meetings, and it'll even tell you if you are required to attend and deal with excusions from mandatory meetings for the members of the COC, NCOs and Staff. If you're expected at a mandatory event it'll say 'I am required'

If not, it'll simply say 'I'm not required'!

Finally, if you'll recall a recent update where we added automatic calendar feed subscriptions for mobile devices etc, we've also added these new event types there too, so you can either get automatic notification of all events, or just of the ones that you're opted into!

If that sounds like you, then hit the green button below next time your over at the Operations Center, to set that up.

Thanks all, and I hope to see you later today on Liberation for our first scheduled public server session.
Please don't forget to head over and mark if you're coming, as per the above - head to the Operations Center (https://unitedtaskforce.net/operations/view/upcoming) and just click 'Mark as going' next to the event.

This update can be discussed in #j10-website and #j11-liberation-server on Discord.