This update is a week or so late, so I'll cover things such as this months Joint Operation, in next months SITREP.

UNITAF will be adjusting for Daylight Savings inline with the United Kingdom on Sunday
Operations from Sunday will be +1 hour than normal, if you're in the UK, UNITAF time becomes UK time, and if you're elsewhere you may have already adjusted and/or will adjust soon - you will see this take effect on the operations center already, if you look at the time for Vertex 5.

So without futher ado, let's get started.

- Acting on AAR feedback we are due to deploy some changes to the medical system to "Make Medics Great Again" starting around Vertex 5, and this includes reducing access to medical equipment for non-medics

- We're happy with the T-GAG review, so it'll be staying for now

- Updates on the Progress of the Contribution and Campaign Centers

- We'll be adding a bunch more awards and medals soon

September saw a small decrease in total attendance, something we expect will bounce right back in October. 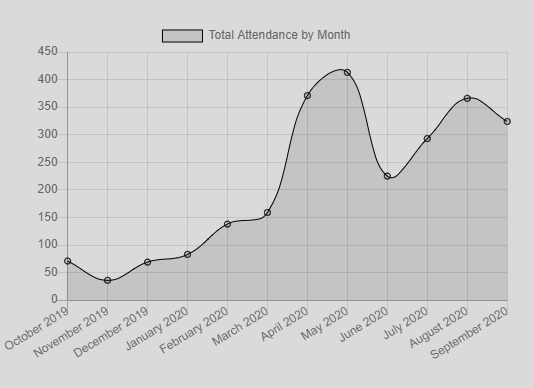 Total Force Strength is the best indicator of the health of the unit, which is roughly stable in September, but is increasing rapidly in October. 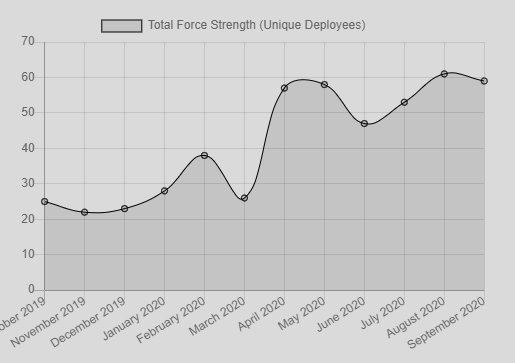 In respect of overall after action reporting, we're seeing the start of a slight downward trend in September, which recovers in mid-October, due to primarily a double change in campaign and mod sets for Vertex and Herrick, typically once campaigns stabilise this will also.

This month, I was pleased to be able to approve the following promotions, this month again see's some further ORGCOC promotions as we open 3 TROOP, as well as a large number of new Privates and Recruits.

This month we also changed the way that Recruits and Candidates are handled, which also effects privates, so we will generally have more of them at any one time than before, as the promotion is more difficult to achieve, in line with higher promotions.

A massive contgratulations to all of the above, well deserved.

In the last SITREP we were just announcing the first time we had a consecutive campaign and it's already looking like a third will be on the way, in terms of anchor days, Herrick and Daesh share alternate Tuesdays with Vertex firmly planted on Sundays in place of Ember, Vertex is generally un-capped wheras Daesh and Herrick sit at the 20-30 mark, in theory we're keen to look at a third anchor day for either a new campaign, part of a current one or even look at doing an alternate WW2 continuation for Operation Giantsbane, at least now that the mod has stabilised. Again, if you'd like to get involved with this, please contact me initially via the #j5-offical-op-planning channel on Discord.

Other things to look out for on the schedule will be Public Server nights, as well as some more Core Infantry trainings' which will be coming soon.

To keep on top of the schedule, we're going to need to expand our roster of Game Masters, we have some fantastic GM's across UNITAF, but supporting a growing schedule is going to be challenging, so similar to our approach with Leadership, we're reaching out to those interested in the fields of Mission Design, Zeus to get in touch or get involved. As long as you have the ambition, then even if you aren't sure how the systems work right now then that's something we can help with, and if you're a dab hand in Eden and Zeus then just getting your head around the Mission Support SOP might be all you need.

The ORGCOC is still seeking more NCOs in what will become more of a continious process, what we're looking for is people with the ambition to lead, being in an NCO gives you basically, guaranteed Leadership time, and likewise for Instructing as well as a number of other things. We know we've got some great potential in our newer members who might even still be CDT, Recruit or Private, and we just encourage you to reach out to your COC with that ambition, as we're more than happy to fast track the right candidate - check out our ORGCOC Policy and speak to your Troop or Section Commanders for more information.

The recent addition of the T-GAG and the threat of forced-push-to-talk from Ember 10 seems to have stemmed most but not all of our concerns on voice discipline, although we want everyone to continue to monitor it, and furthermore we think that DUI Squad Radars HUD features relating to voice and radio activations will help to identify any other issues on this front, so for now, we will leave it to a wider review in the future.

- This month saw a couple of NCOs step down due to other commitments, a massive thanks' goes to PFC Sharkhus and PFC J "Willy" Wilson for their time served in the ORGCOC as Corporals

- Pvt Milky for his delectable videos from Operation Herrick

Having just come out of a UNISTAFF meeting, our focus is very much on building and adapting our systems based on what we've now learnt from our current size, so we can be better prepared for a even busier schedule, so we're aiming to hold UNITAFs active force at it's current size, until we are comfortable we are able to support it fully. Those systems predominately relate to the Campaign and Contribution Centers, the recruitment of more Leaders and NCOs and Game Masters and finally, a review of the Training and Progression systems, and by extension the 1UP system.

The campaign center has had to take a development back seat due to other items on the roadmap, but is still underway, and will likely fall into the Winter, after the Contribution Center is released.

The contribution center is a new area of the website which will take all of the contribtion units from J1-J10 and break down the roadmap for each, showing everyone what's planned, and also detail out anything you can do to help UNITAF in any of those areas, it will also track contributions made by you similar to the Operation Tiers and also will replace the Discord Bot ?suggest, creating a better management and visibility of suggestions on the website. The CC should be live by the time the next SITREP goes out.

When we put the current tier system in replace of the old assessment system, we knew there would be some issues. Primarily that some people can be capable of something without having the experience, and some people can actually have the experience but still be not fully capable of a role. We have recently roadmapped changes to the Tier system which mean that in the future, we will seperate Experience and Capability systematiclly through the system, but building on the Tier system with a SOP coverage tool. Essentially this additional system will show you all the roles you have unlocked, and those which you haven't and why. It will mean that in some cases you can deploy to roles you don't have the tier for if you are deemed "Capable" and in other cases visa-versa.

This will be linked to the 1UP system, automatic 1UPs will prefer people that are deemed capable of a role even if they don't have the experience, although it prefers people that have both. All roles will have specific SOP attached to them, rather than the general area, and SOP coverage would be required to keep the role unlocked, especially when large SOP changes come due to game mechanics or mod changes.

What this means for you ultimately is we want to ensure always that capable people are in ORBAT roles at all times, and a full video will go out, with a detailed explaination when this change is realised, but with the development queue at the moment, that could be a month or so, so I'll just raise it here, and know that we'll be back with more information soon.

You can of course, discuss this in j6-training-and-sop.

Recruitment is an ongoing process, but it's not something we're massively struggling with right now, but we are always looking for exceptional people, and while we're not aiming to grow right this second, we will continue our efforts to keep out current size.

DUI has replaced STUI due to it's Discontinuation, we'll be refining it's settings over the next few operations, at the moment the only known issue is for those with Custom FOV settings.

Without any substantial changes to any settings, this change will make Combat Life Savers a valuable and useful asset to the fireteam, as the only person carrying medical supplies and hopefully result in them dealing with most things we would normally deal with ourselves, allowing us to maintain sectors of fire at all times.Squad, Platoon and MERT Medics maintain their useful stance.

Looking forward, we're going to monitor the first few operations on the above changes (the earliest is likely to be Vertex 5) and adapt as required, this is likely to involve the re-enagement of Advanced Wounds and bandages, as well as wound re-opening, but more on that, soon.

If you've not already checked out the new Medals and Citations area you can find it here, and we're about to add a whole bunch of new Medals to it, as it's looking a bit bare, but if you have any ideas for some, you can dump those into J10-website.