- Some new US Timezone Operations.

- Updates on the UNITAF Strategy for Player Quality and Medical

Total attendance is up 37% on September, setting a new record. That means on average 6.4 deployments per person in this period. 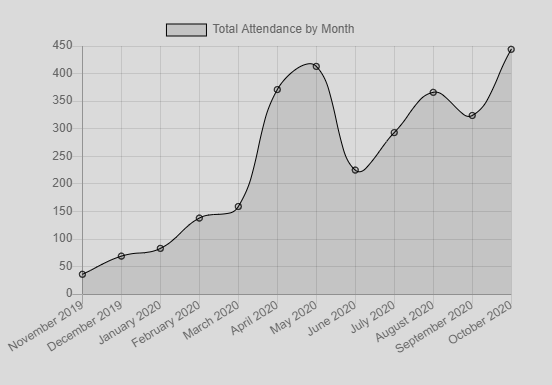 As anticipated last month, October sees an increase of over 30% in the number of deployments. This follows a number of Mission Support practices, and the launch of a number of new campaigns. 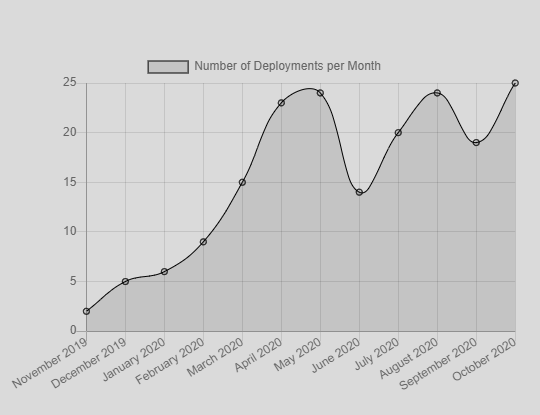 Total Force Strength is the best indicator of the health of the unit and is also up 15%, and is the start of another upwards spike going into November. 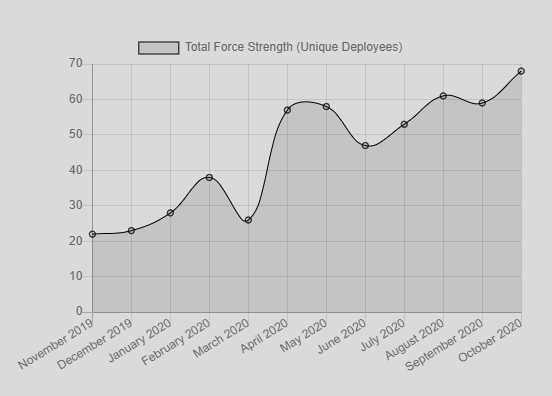 This month, I was pleased to be able to approve the following promotions, including our first ever E-4 Specialist Promotion.

Other promotions worthy of note are 1Lt Kevin, as 2 Troop adds it's 3rd SECTION and Cpl BigRed and Cpl Cross

Medal issue will likely move to monthly, as part of a medals update coming later this year.

The recent changes to the medical system have been overwhelmingly positive, and while we'll continue to make minor adjustments we are happy with progress, and the training that is underway. Furthermore, one other change to SOP is that the use of MERT, must be in accordance with METT-TC. In short, if ground vehicles are already deployed, the primary medical treatment off-field should be a medical MRAP or APC. MERT should be used in cases where ground based medical support is impractical, and when escorted by an Attack Helicopter or operating in non-threat AOs.

- A shout out to Pvt Mectus who built an entire campaign from his first Mission Support practice, Operation Parabole scored very highly on AARs too.

Our focus last month was medical, and this month we're shifting our focus to quality of membership. We already have some great tools for reviewing missions, and for dealing with conduct violations and SOP violations, but as we continue to grow, we're going to add some more features to give you options in relation to the quality of missions. These features will include roadmapped plans such as operations with a minimum rank requirement (i.e. Special Operations and NCO Ops) to systems that track specific player reputations, which I'll cover off more below.

I'm really pleased to announce, that alongside Op Herrick, Op Vertex and Op Daesh Dawn, we've just launched Op Parabole and today we're announcing the reactivation of Op Giantsbane and a new campaign, Op Panther. Both of which are part of a new operation type 'Historic'.

Finally, we're going to be scheduling some secondary objectives from our main campaigns into the primetime US timezones, around 0030hrs UTC, on Fridays (likely alternate weeks to Parabole).

Let's break this down a little;

As part of our focus on quality operations, one of the upcoming changes you will notice is the ability for field leaders to set a minimum rank requirement to an operation. This is something only currently possible for NCOs, as we occasionally deploy on NCO only deployments, in order to bring the leadership together, people who are often leading their own callsigns. I suspect this will be limited, as we do not want most operations to be capped, but you could see minimum ranks of Recruit being set on most deployments, and some smaller, specifically SPECOPS style missions starting at Private, or even PFC. Again, we're only able to do this due to the fact we're doing almost 30 deployments a month already.

One of our latest observances is the lack of any method for you to indicate how deploying with specific people was for you. This is something we want to have an outlet for, bearing in mind how well After Action Reports work. We already have a great tool in MYCOC for NCOs to administrate through the ORGCOC, but we want to build on this by providing a way for you to, as part of your AAR, indicate what your experience was like with members of your team. This will be an anonymous system that will produce what is effectively a Reputation score which the ORGCOC will use to track any potential long-term issues. When this launches, there will be a specific report about how it works.

Suffice to say, we are comitted to tracking behavior and dealing with it, to ensure that everyone acts in accordance with our values and procedures.

A final focus of our quality strategy is an update to our Tier system. You'll notice as with Vertex 8 and 9, we've locked slots such as MBT Crews and A-10 pilots to those selected at a corresponding FTX. This is essentially because the Tier system is not a perfect assessment of someones ability, but it does demonstrate experience. Upcoming changes to expect are an alternate assessment based system, that will allow you to bypass the tier requirement for a rule by passing an optional assessment. Call it a fast track if you will, these methods will be intensive but thorough, and ensure that any holder of it is 100% capable of the role in question.

The tier system itself still remains the primary driver, and priority is still given to those with the tier, and even more so to those with both. Certain roles, such as pilots are specific to certain airframes, and so expect to see this used across the Aircrew role set, whereby being assessed in a certain aircraft may become a requirement for a given slot.

This is only a very basic indication of the direction of travel with the tier system, but there will be an entire update on this subject alone, when it comes around.

Recruitment is an ongoing process, but it's not something we're massively struggling with right now, but we are always looking for exceptional people, and while we're not aiming to grow right this second, we will continue our efforts to keep out current size - so if you have any friends who you'd think would be a great fit, why not send them an invite?

The medical settings have been finalized according to the last announcement.

Currently under operational testing, Immerse essentially adds camera shake for explosions, and flash effects from your personal weapon, as well as some punchy animations for weapon kick.

While primarily a immersion mod, this will stop some of our more trigger happy ARs, and help people to stick to bursts per SOP.

Currently under operational testing, Suppress is another example of a intent to build upon our medical system to provide a more obvious warning to being under fire, and to force a player under fire to take immediate action. Being shot at by a high caliber weapon will be an issue, even if you are not directly hit. As a result, we hope to see more thoughtful planning from junior leaders and senior leaders alike. As well as more realistic movement and usage of cover. It also provides a unique option to GMs.

The following mods were approved for use;

If you know anyone who you think would be a great fit for UNITAF, why not send them an invite?