- Big changes to 1UPs (Up Tiering) and Tier Progression

- A New After Action Report System with Reputation

- A new Core Infantry Course to follow on from Recruit Training

- An update on the ORGCOC

Total attendance is, believe it or not up another 20% on October, setting yet another new record. That means on average 7.6 deployments per person in this period! 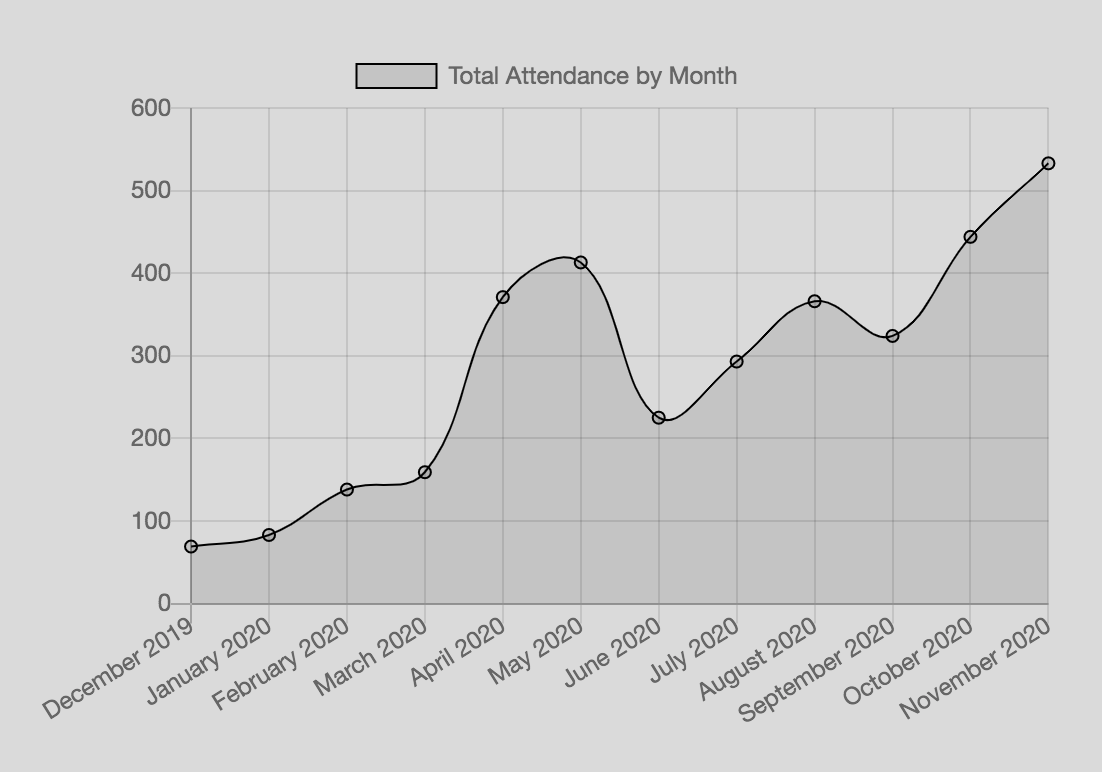 November was (unsuprisingly) a record month for Deployments, with 27 deployments, a record set to be beaten this December. 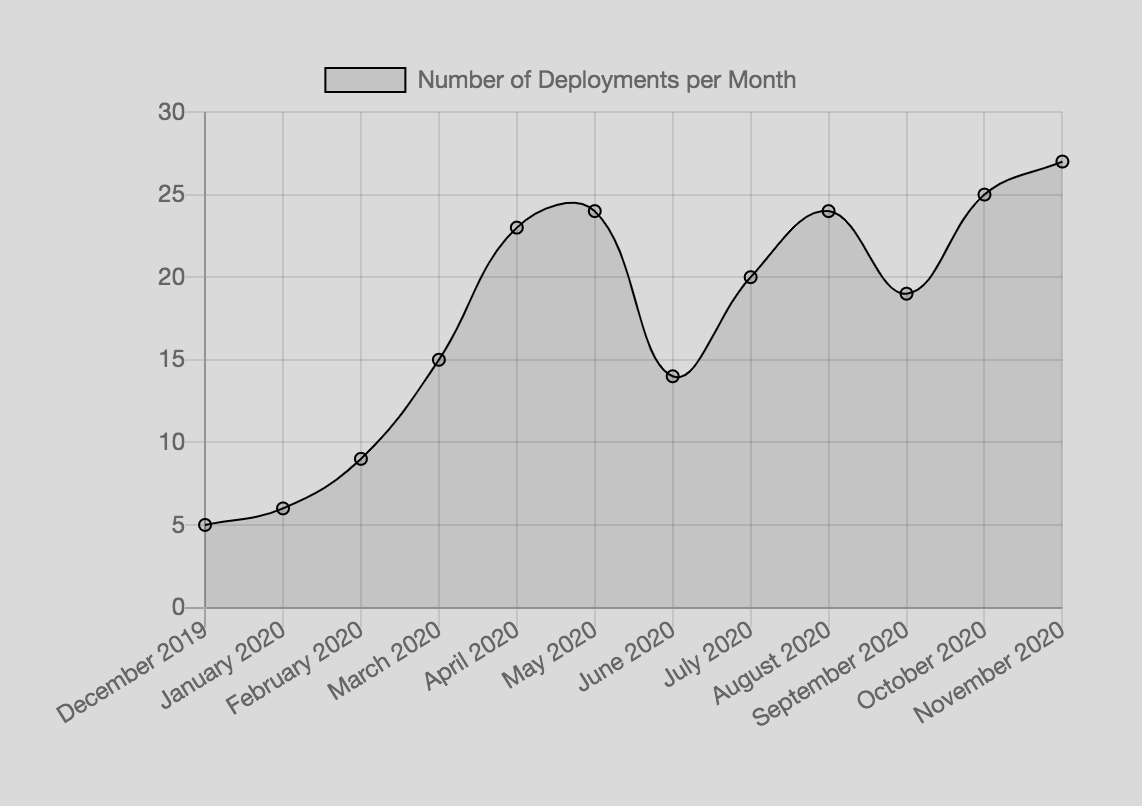 Total Force Strength is the best indicator of the health of the unit and is stable at 70, this is the result of some purging done by the ORGCOC, which also explains why the total force activity is higher (with the 7.6 deployments PM up from 6.6, and 4.3 pre-COVID) 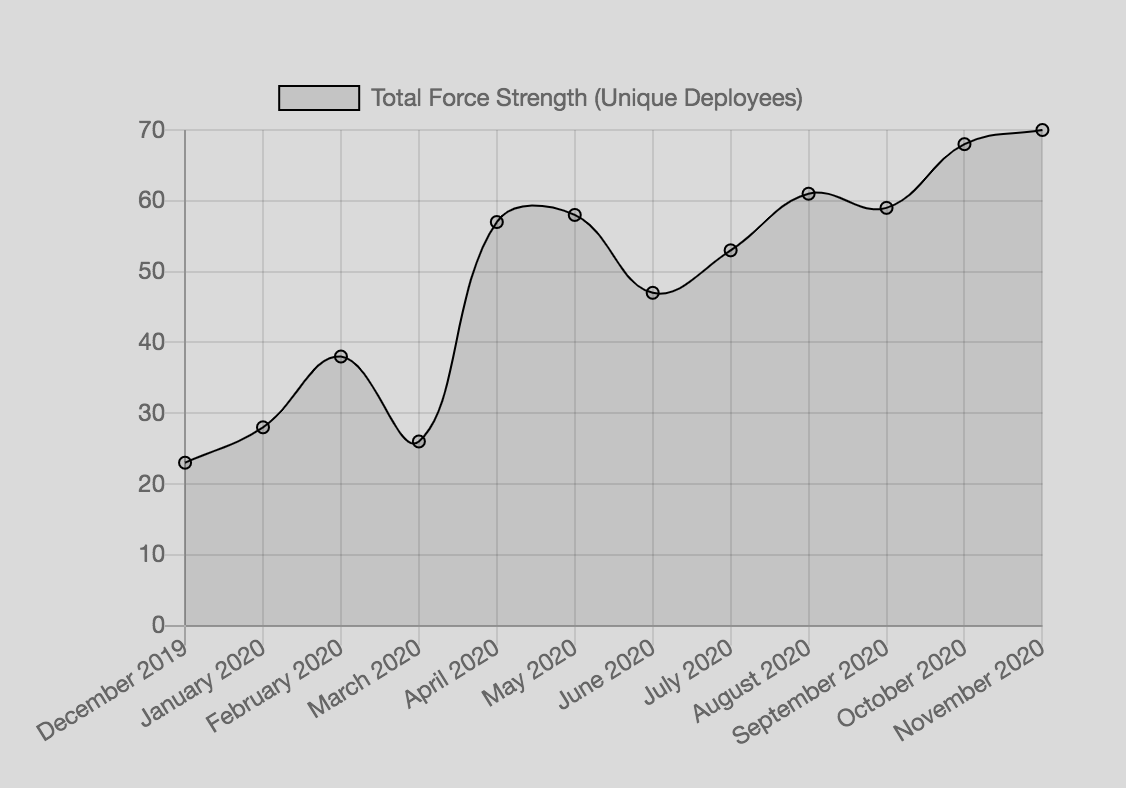 In the last 30 days or so, I was pleased to approve the following promotions. You'll notice a couple of Senior ORGCOC promotions, this is due to the On-Leave status of 2Lt Zero and SSgt Attackbee, which causes a ripple promotion effect. But some worthy candidates have joined the ORGCOC in recent weeks, and more will do so soon as well.

Those long-time members of UNITAF will note the campaign center has been planned for some time, it will better tie together campaign missions by providing a central place for mugshots of HVTs, intel feeds and imagery as well as logistics, finance and other matters. The intention is to launch this alongside the new Sunday campaign on January 10th, it will be a massive change for UNITAF towards our long term goals.

Probably a little known development, the contribution center aims to communicate what UNITAF is working on at any time, and better facilitate people joining our working teams that cover all of the key functions of UNITAF, again more information will be forthcoming, as it is released.

As mentioned previously, Vertex ends this Sunday, and we're kicking off 2021s first Sunday with a Operation Panther mission, on January 10th, we'll be deploying to our new Sunday campaign, which I'm really excited for, and an announcement will be forthcoming with details very soon.

You'll notice as promised in SITREP/6, and as part of the Quality Strategy that the minimum rank operations have been fully implemented, and all combat deployments now require a minimum rank of Recruit, as do all advanced Trainings, and you may occasionally see higher minimum requirements, such as for Special Forces deployments, or ORGCOC sessions.

Again, part of SITREP/6 and the Quality Strategy was the introduction of the Reputation system to extend the AARs. This Sunday, Vertex 14 will be the first deployment to issue the new AARs, while we're not doing anything with the Reputation system right now, we're going to monitor how it is used first, before we implement any systems around it's data. The purpose of the system is to identify anybody who needs correcting on mild policy or behavioural issues by using a crowd sourced reputation system, but also to use it for issuing the new Good Conduct medals too.

An example of the updated AAR system can be seen below, note that you can only rate people in your immediate team. 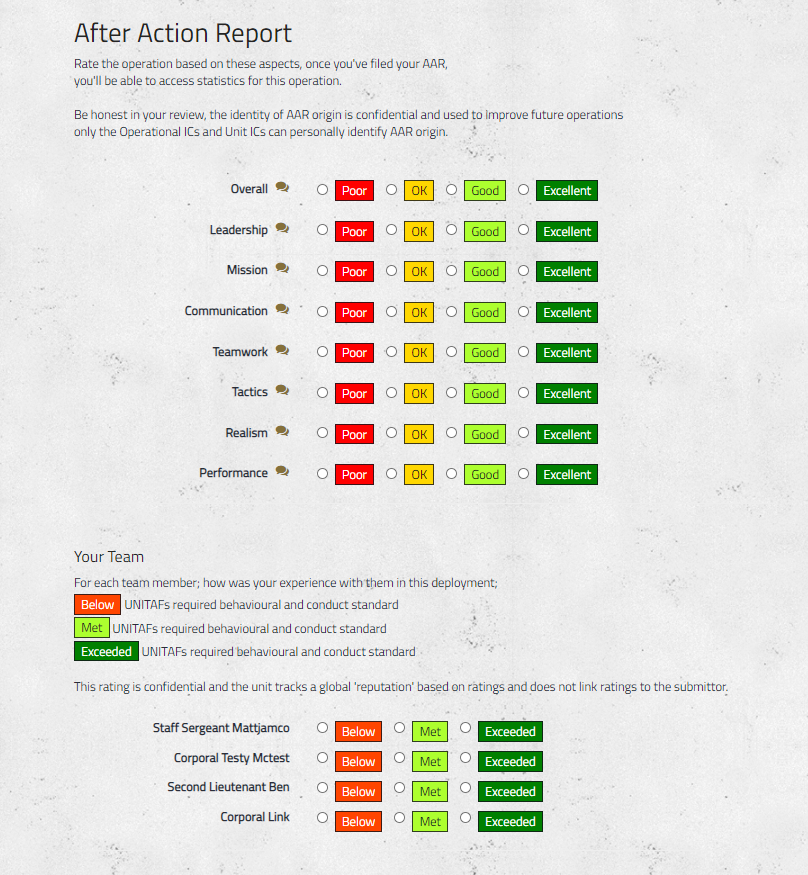 Field Leaders in the past have been inundated with requests for 1UPs and the system has also not been the most fair either, to bring it in line with other UNITAF systems, you'll notice the Automatic UP-tiering system was recently released and is being used on a all upcoming deployments.

Here is the low down of how it works;

24 Hours after initial release of an ORBAT (or 48 hours for 2UPs), having given enough time for qualified persons to deploy, the ORBAT will automatically seek those who are in the tier below for all roles, to help with this we've added two changes.
The first is a release time, so you know when the ORBAT was released, to the right hand side.

Next is a non-pinged message into mission-pings by the bot, which will inform everyone when 1UP and 2UPs are possible for any given operation.
In any case, when possible, the ORBAT will show you either a 1UP or 2UP button in place of the deploy button.

UP-tiering is a privilege though and not a right; so we've also added some further fallbacks to prevent UP-tiering in some circumstances;

In each case, you'll be given a warning, examples below; 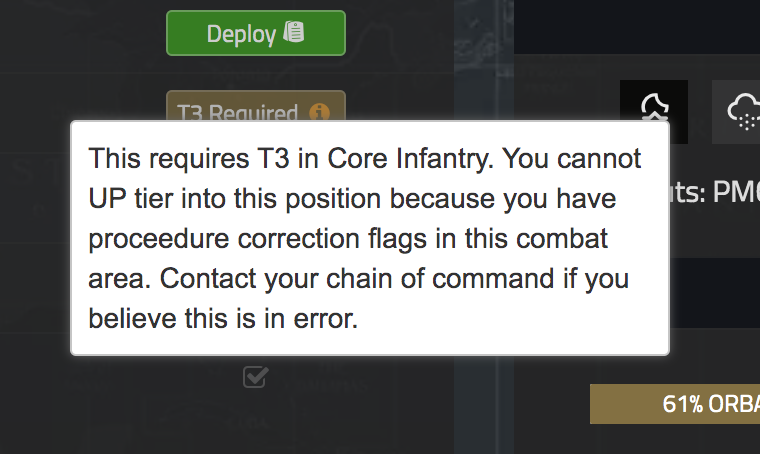 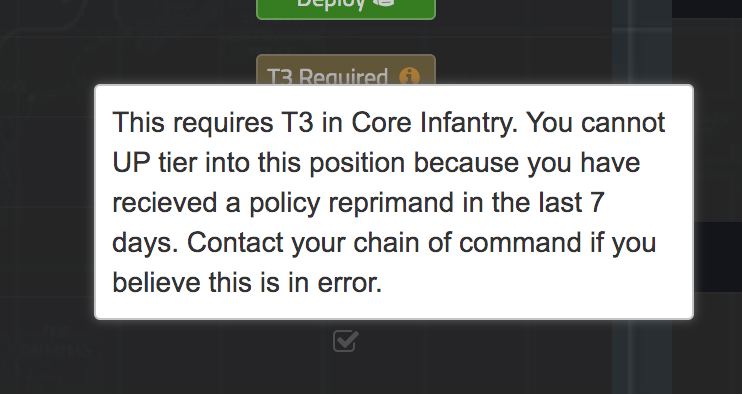 Ability to Swap ORBAT positions without Cancelling a Deployment

Another nifty change you may have noticed above is the ability to swap your ORBAT position without having to cancel your current one first, this is especially useful for 1UPs, re-deploy buttons have an apt UNO-REVERSE icon so you know you are switching roles.

The UNITAF mod has been under regular testing in the last few weeks, and we intend to launch this alongside the new campaign on January 10th, again there will be a dedicated announcement when this happens, but we very much look forward to replacing the table with the tablet.

I'd like to especially thank this month SSgt Attackbee and 2Lt Zero for their service over the last 18 months, and we hope to see them deploying again soon.

It's been another great month for UNITAF, and I'm especially excited to see the UNITAF Mod and Campaign Center launched in early 2021.