- Forthcoming plans for UNITAFs 2nd Birthday and the Easter Special

-  Some updates on UNITAF Merch

The upward attendance trend continues into another record high in February, with close to 700 slots completed, with the total force strength holding steady at 94.

Deployment wise we see our second month running with over 30 deployments, again holding steady, and no significant movements in AARs. 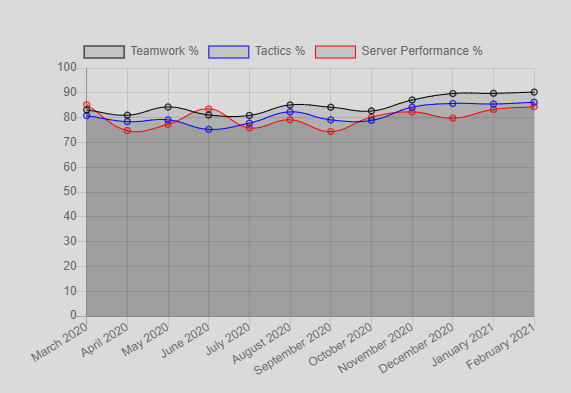 TAFFCAST is back this month, and in a slightly tweaked format based on some feedback from the first episode. Each episode of TAFFCAST will carry a theme of some sort, and while it will touch on parts of the SITREP from the same month, we'll focus more on the theme and will also have a guest on relevant to that theme. This months guest is SFC Mattjamco, on-duty celebrity and long time Zeus turned Field Leader. We talk about Mission Development in UNITAF.

Upcoming episodes will touch on Leadership and another on the work thats involved in making the UNITAF machine work.
If you'd like to be a guest on TAFFCAST, or have questions you want to be addressed on it, fire them over to podcast cheif SFC Zero on Discord.

Or use this feed URL in iTunes and other Podcast players
https://feed.podbean.com/unitaf/feed.xml

In the last 30 days or so, I was pleased to approve the following promotions. It see's some major movements in the ORGCOC, as we've been paving the way to double up seniority at every level, from Sections to Troops and very soon, the Task Force HQ as well.

As always we are always happy to hear from people who'd like to dedicate more time to UNITAF by joining the ORGCOC, speak to your COC to let them know your interested and they will try to point you in the right direction.

Changes to the Administration SOP and SOP on Leadership

Alongside this, we've added a 'Principles' section which talks about what we expect from our Leadership, and what it means to be an effective leader in UNITAF, both in and outside of the game.

To make it clearer what is expected in the mission making process, the mission planning SOP under Field Leadership has been split into 4 new and updated SOPs - a useful read (or listen) for both mission developers and leaders;

P15-145 Policy: ORBAT Slot Allocation condenses years of SITREP updates to the slot allocation system to provide a central policy and location. This is something that has been requested and we want to ensure that fairness and transparency is provided here. You can find the policy linked on all ORBATs and you can read or listen to it here.

Release times typically have been 4 days exactly before an operation execution time, but this often resulted in ORBATs releasing during other missions, so by default this is now 90 minutes before the execution time. So many releases will now happen around 1730 UTC.

While I won't go through the full rundown of the survey, I did want to share some of the responses from this years, compared to last years results.

(Above) These two demonstrate the work done over the last year to improve personal progression, work that is ongoing and we hope over this year, to improve this even further with a robust Advanced Core Infantry Training program.

(Above) It's promising to see that efforts to improve clarity in the progression paths with the tier system are bedding in, and result in a much more decisive opinion this year.

The general feedback this year, as with last year have been incredibly useful, and with a large focus on the slot allocation system we addressed last month, and so continue to expect work to be done on these systems going forward.

In March, we'll start to introduce the following planned changes to the ORBAT system;

- Aircrew will be split into Fixed / Rotary (and hours re-distributed)

- Reprimand Reports, No-shows will have a time penalty to Deployment buttons

- 'L' Plate slot functionality, so that certain slots can be reserved for people who don't have the tiers yet.

We'll also deploy on Operation Typhoon, which is a USMC campaign in a Russian backed Coup of Jamaica

you can find more information about both, on the Campaign Center

On Easter Weekend, we'll have a Special Operation that's all about tanks, alongside our normal Sunday Operation. We'll also start to ramp up plans for UNITAFs second birthday in a couple of months time.

As mentioned a little while ago, we expect to be in a position to launch the UNITAF Merch in the coming weeks (hopefully)

Alongside the upcoming changes to Aircrew, there is a desire to really beef out an advanced core infantry training to run every couple of weeks and so if this is something you think you can help with please get involved. The same can be said about some other areas, such as communication in relation to FAC/FO that could do with some SOP updates. A new training map on Altis is underway, and due to replace Malden soon also.

- External radio nets are now set automatically, but unlike before are not enabled by default as an additional channel

Congratulations to Pvt Chelmy, who raised over £500 for Children with Cancer UK as part of a 24 hour live stream this month on TwitchTV. Part of which featured Operation Parabole, thank you to everyone who contributed with their support by donating, I understand that their employer will double the final amount, so great work.

A seperate update will follow in the coming days, dedicated to a Mod review, including suggestions.

It's been another great month for UNITAF, please do let us know your feedback, including the new Podcast on Discord.