Background Information
A mechanised platoon from the 75th Ranger Regiment continue the push into IS held Shegamar valley.

Enemy Forces
IS have been fortifying the valley since the operation began, expect well dug in forces.

Tasking
Bravo platoon are tasked with pushing deeper into Shegamar valley, capturing surrounding IS strongholds. IS have been digging in and are expected to put up fierce resistance. Shegamar valley is a key route into the North of the region.

Commander's Intent
Simply put, the intention of this mission is to continue to secure the valley region known as Shegamar Valley, securing local urban areas, important IS positions and two key river crossing areas cutting through a mined riverbed. The platoon will move through the AO in a roughly counter-clockwise direction. Objectives past PHASE 1 will be assigned based on momentum and contact received in PHASE 1. 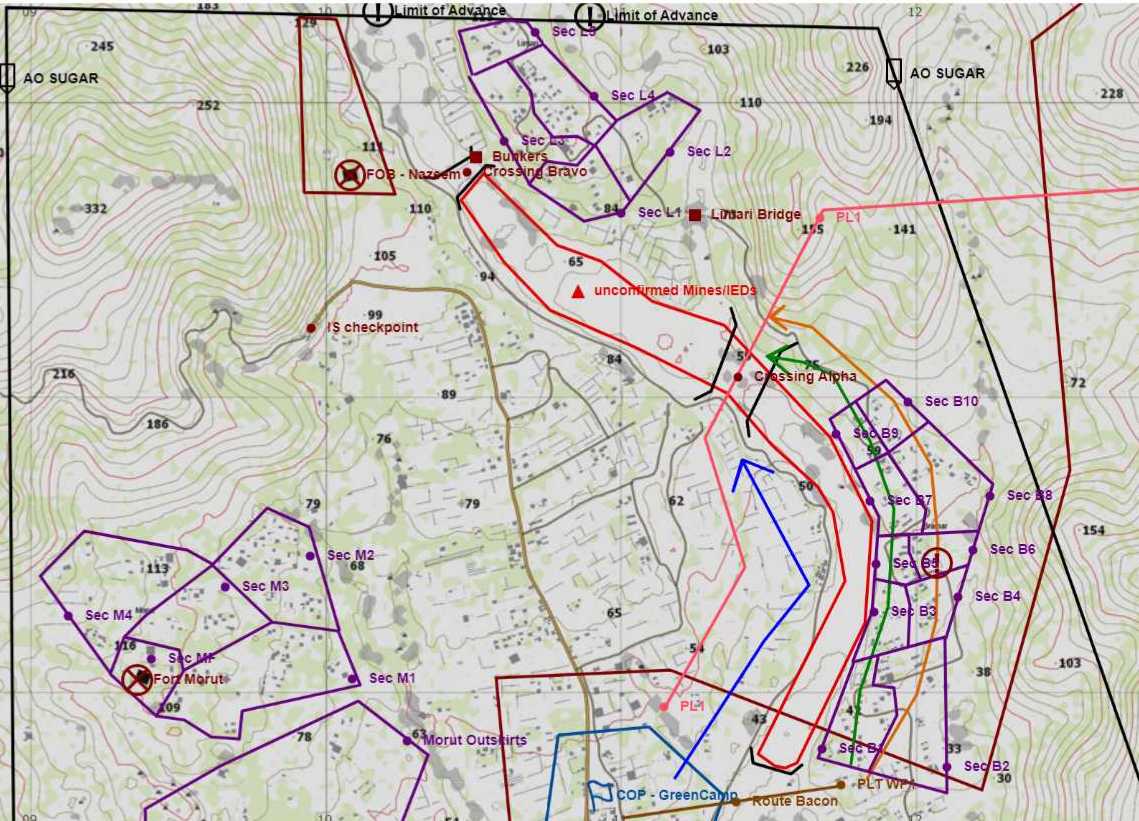 Above, tasking sequencing for the second stage of AO SUGAR. PHASE 1 will consist of a three-pronged assault through Bramar and the Western side of the riverbed. 1st squad will take West of the riverbed with 2nd squad on the Eastern side of the riverbed and 3rd squad the outer Eastern side of advance, shown above as Blue, Green and Orange respectively. Once Crossing Alpha is secure, stage for PHASE 2 will begin. PHASE 2 will consist of EITHER a platoon assault toward the Southern sector of Limari, securing the marked sectors and Crossing Bravo; OR a platoon assault along the Western side of the river toward FOB Nazeem and the IS Checkpoint, clearing any IS presence in the buildings between. Squad leaders are briefed on the need for flexibility with objectives, and our mechanized posture should assist with this. PHASE 3 will consist of the assault of the town and fort of Morut. Sectors shown above will be assigned based on previous positions, but will likely try to maintain an order of advance with 1st squad on the left side of advance, 2nd in the center and 3rd on the right. Throughout the operation, the two attached littlebirds under callsign HAWK will act in a supportive manner providing observation and close air support. An attached EOD team under callsign ECHO will be on hand beginning clearance of the riverbed whilst on call for any disposal needed by the infantry throughout their clearance of the AO. Taskings for this team will be directed through the platoon sgt BAKER 8 down to Echo Actual. ENDEX will commence on our return to greencampbase.