May 2022, Isla Duala, off the coast of East Africa. Isla Duala is the main landmass of a small island group split between two nations currently experiencing severe political tension. The Northern of the two is known as Molatia- a totalitarian regime under the dictatorship of one High General Anwar Bokassa, Molatia relies on an economy of natural resources and land exploitation. To the South is the nation of Afrene- led by the democratically voted President Mengistu Rawlings, Afrene is a popular tourist destination for European citizens.

Both nations have publicly threatened the other over land disputes and political insults. Militia groups act against opposing territory with thinly-veiled support from both nations. Whilst Molatia have massively increased their military spending and Afrene does have a small standing military force, both territories have yet to officially declare war on each other.
The border between both nations is heavily defended on the Molatian side. The Afrene side is mostly determined by the bodies of water which run around and through the North and North-Western side of Afrene, however there is a friendly-controlled land border on the North-Eastern frontier, as marked on the following image. 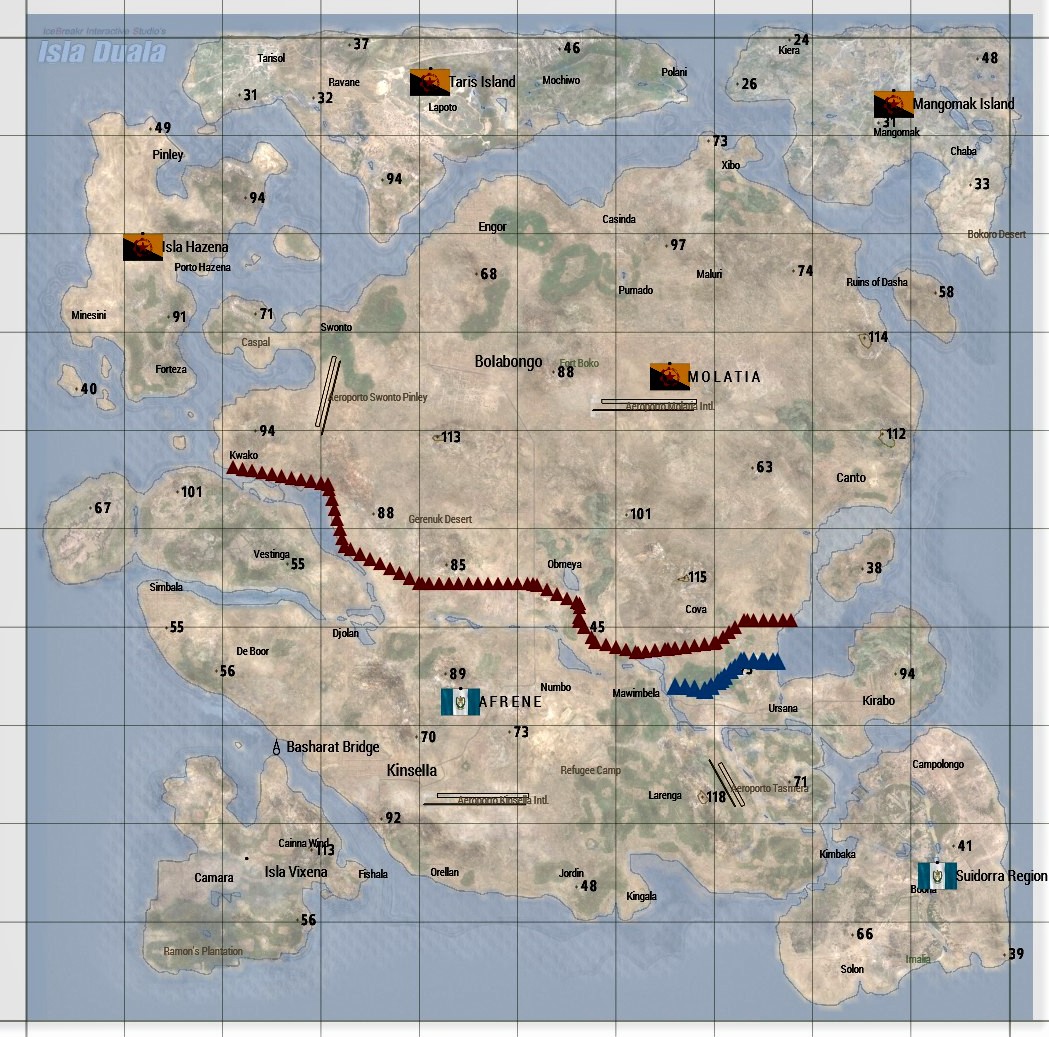 Political leaders in Europe have secured a NATO intervention to enforce peace around Isla Duala. The U.S.S Freedom carrier group will dispatch to the friendly nation of Afrene. Isla Vixena was recently assaulted and captured by Molatian paramilitary forces and will need to be secured before NATO operations around the main island can begin.
Once Vixena is secured, friendly forces will assist the Afrene military in securing the Afrene border and routing militia groups from friendly territory. NATO forces will also act as a military deterrent to the nation of Molatia, in a bid to prevent all-out war between both nations.

Afrene has allowed the use of Isla Vixena from which NATO may base operations. Once Isla Vixena is secure, NATO elements are to commence peacekeeping and counter-insurgency operations throughout the nation of Afrene. Engagement on Molatian soil is likely to coerce the nation into a declaration of war and is to be avoided. NATO Command will for the most part defer decision making to the CO of ground elements to allow greater flexibility.

UNITAF are directed to deploy from the carrier group and organise a Forward Operating Base at FOB Lion. Owing to the recent occupation by Molatian-backed forces, UNITAF elements will need to assault the FOB and secure the surrounding land.
UNITAF will then organise around counter-insurgency operations to increase stability of the Afrene-controlled region. Intelligence-gathering is crucial to efforts to collapse hostile militia forces and will be a focus throughout our time around Isla Duala.

1. DEPLOY FROM U.S.S FREEDOM CARRIER GROUP AND ASSAULT FOB LION AND THE PAIRED SUPPORT HEADQUARTERS.
2. SECURE ISLA VIXENA AS BASE OF OPERATIONS FOR THE REGION.
3. BEGIN INTELLIGENCE GATHERING ON MOLATIAN MILITARY CAPABILITIES AND MILITIA STRUCTURE/ ASSETS.
4. CONDUCT COUNTER-INSURGENCY OPERATIONS AROUND THE NATION OF AFRENE.
5. PREPARE FOR AND ACT AS A QRF SHOULD MOLATIA DECLARE WAR ON AFRENE. 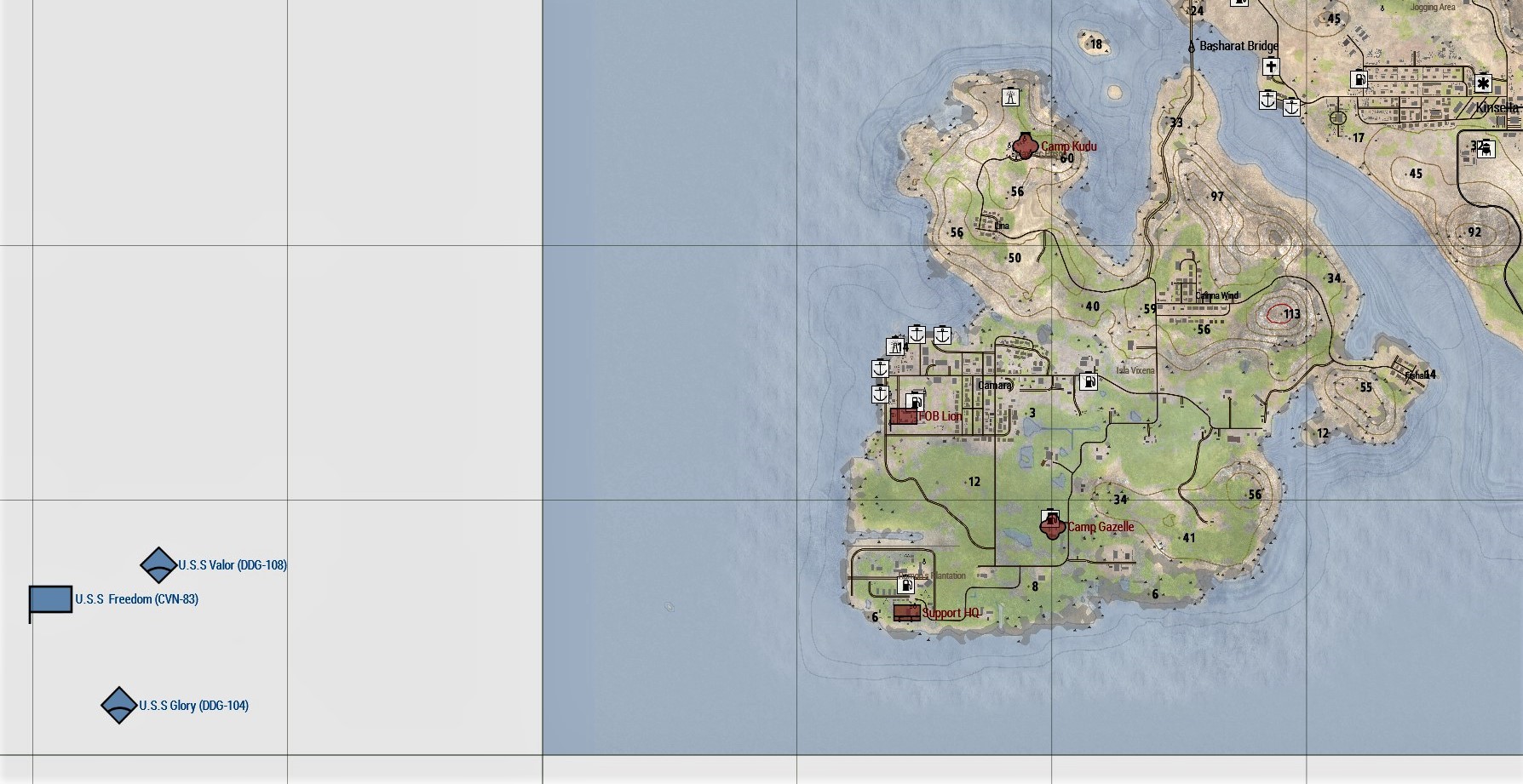 Due to heavy military spending within Molatia, a sizeable armed force may be brought to bear in the case of a declaration of war. Thus far hostilities have been confined to light guerilla warfare on the part of militias supported by each nation. Expect light-skinned technicals and small arms of soviet-era design. No armour capabilities have been noted from Molatia at the time of writing.
It may be advisable to rendezvous with Afrene-sponsored partisans for intelligence and support.