The Afrene Army Corps have been swelling their ranks by drafting and training citizens. This has allowed them to organise a counter-offensive at Numbo, lost in the initial Militariga Molatia assault over the border. Thanks to the successes of UNITAF operations thus far, the Militariga Molatia is reeling and will likely not be able to hold Numbo for long. However, since the town is well fortified the AAC commander has asked for our assistance with the assault.

UNITAF elements will attack Numbo in the morning alongside AAC elements. The current AAC plan is to muster at Staging Areas Apollo and Artemis. When the assault begins they will push over the hill and into Numbo, breaking through defences in an intended shock and awe attack. UNITAF elements may assist as they see fit. 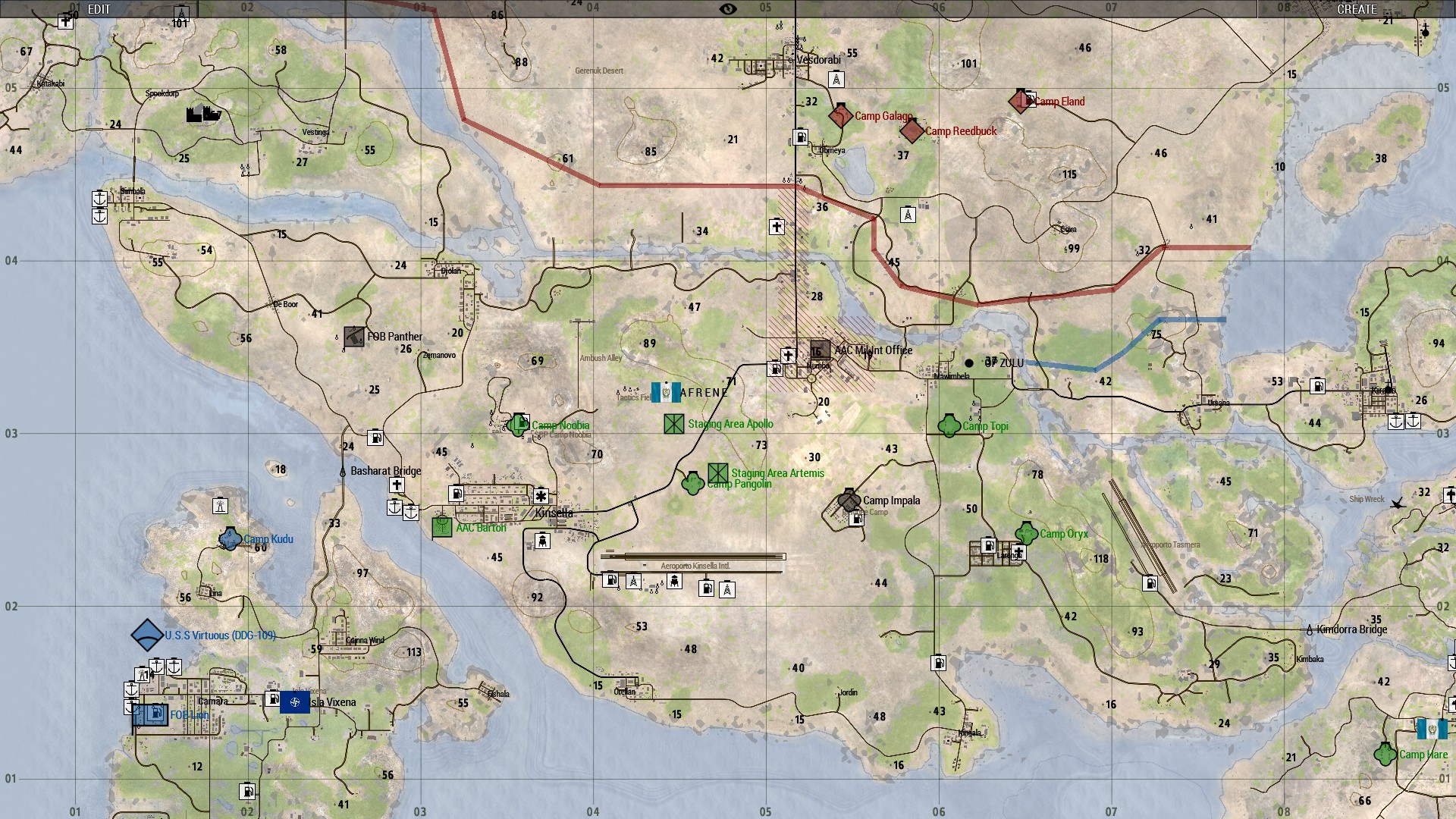 Once Numbo is taken, time willing, UNITAF elements are authorised to push over the border into Molatia and secure a beach head on the Molatian side. UNITAF forces are advised to stay close to urban areas and lowlands to minimise the possibility of enemy artillery being brought to bear against them whilst in Molatian territory. Camps Galago and Reedbuck and the village of Obmeya are the preferred stretch targets when over the border.

COMMANDERS INTENT: The commanders intent is to help to recapture Numbo with and for the AAC, and to push aggressively into enemy territory to knock out key fortifications on the south side of the MM border. Minimising collateral damage, civillian and friendly casualties - ultimately taking or capturing a forification to use as a combat outpost or patrol base inside enemy territory. 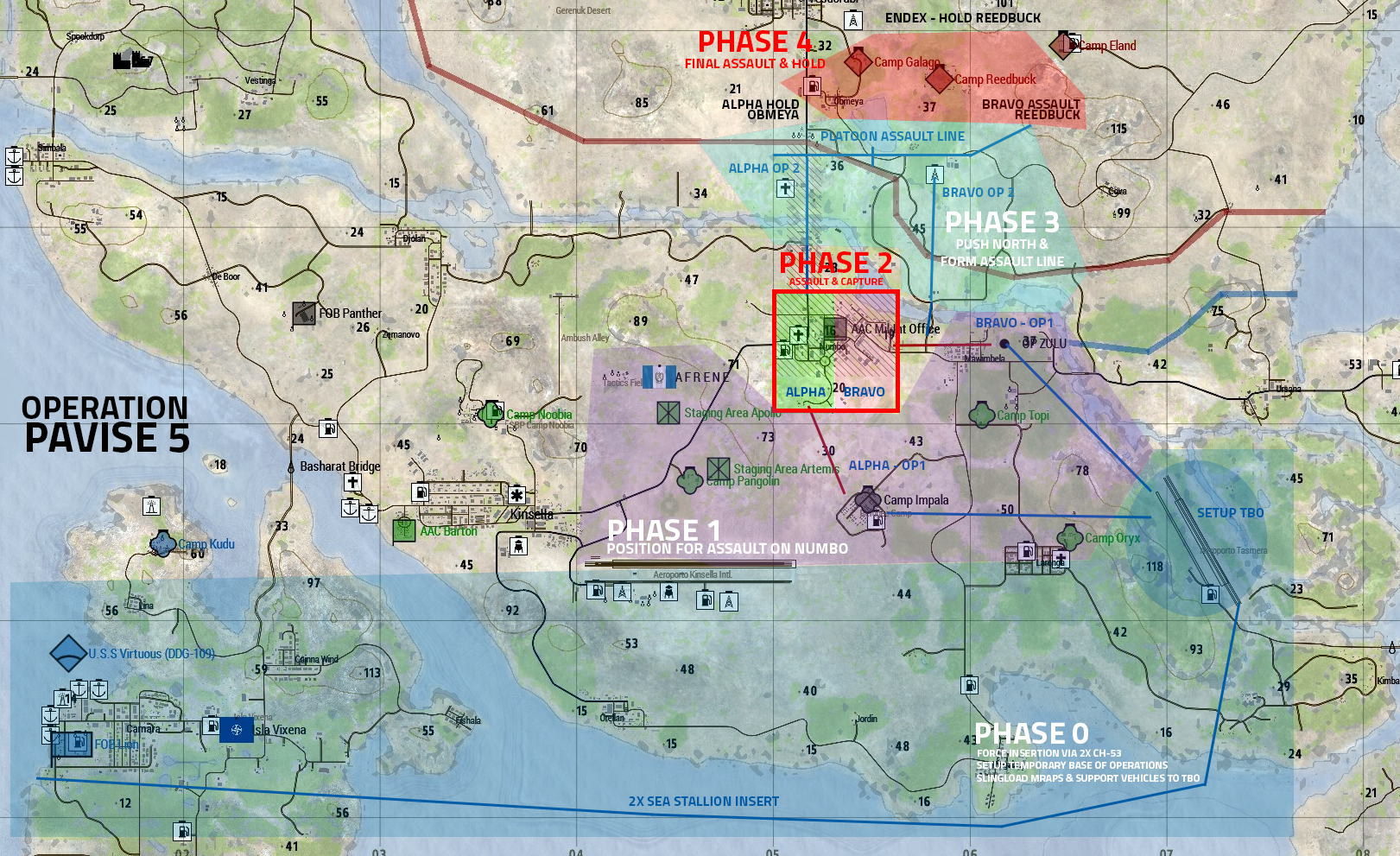 SHOULD ALL PRIMARY OBJECTIVES BE MET, THE OPERATION WILL BE CONSIDERED A SUCCESS.

BATTLE DRILLS AND ACTIONS ON

Afrene Army Corps elements will be moving from the South-Western side of Numbo in an organised assault. The Afrene military's uniform is easily distinguishable from that of the Molatian's; friendly fire will not be tolerated in any capacity. When attacking Numbo be aware that friendly forces may be occupying locations that your stray rounds impact upon.
Assisting Afrene forces and preventing heavy casualties on their side will allow them to be more impactful during the remainder of the campaign.
OP ZULU is currently held by a small AAC scout team; they will be providing any intel and assistance that they can during the operation.
Camps Topi and Oryx are held by Afrene garrisons and should be safe areas for UNITAF to move through.

Numbo is currently held by Molatian regulars, and the Molatian Engineer Corps have been brought in to construct field defences and fortifications; expect heavy resistance in Numbo.
Hostiles in Numbo are reported to be fielding a large amount of AT weaponry.
Molatian AA assets on their side of the border pose a significant threat to UNITAF air assets; all air assets brought to the operation are to remain at a low altitude (preferably below 100m) and are not to cross the border.
The Molatian town of Vesdorabi is another well-fortified and garrisoned settlement and will need to be assaulted in a following operation.

The town of Mawimbela (East of Numbo) has been evacuated of civilians leading up to the operation. MM forces may dispatch patrols to investigate so be aware when moving near the town.
Civilians may reside in Obmeya and Vesdorabi and are to be treated humanely and in accordance with standard protocol.

The storm front passing over the region continues to bring rain and reduced visibility. It has been noted by Afrene meteorologists there is a fog forecast for the operation.

THE OPERATION WILL BE LEAD BY CAPTAIN JAMES (COMMANDER GROUND FORCES) AND THEN BY SECTION COMMAND SENIORITY A, B, C AND THEN BY RANK.

WILL BE CONDUCTED IN ACCORDANCE WITH UNIT SOP, SEE ORBAT FOR FREQUENCIES AND CALLSIGNS.