Ion's first real operation on Tanoa was a disaster.

For the company, not only having security compromised at the facility but losing a van containing [REDACTED] was incredibly dangerous and embarrassing. Although the Ion Operatives did manage to locate and destroy the stolen van, not all of the shipment was accounted for and as many as 6 barrels of the chemical could be missing.

Another hit for the company is out of the two ground teams Ion fielded for the operation, Knight and Hunter respectively. 3 were reported KIA and 2 were captured from the Hunter callsign, thankfully those captured where then rescued in a combined counter offensive. More details on this found at [REDACTED]Since then Ion have reorganised, redeployed and prepared for the next operation.

A pair of Littlebirds have been flown in to aid with the coming operation. Along with the additional helicopter, Ion HQ have decided more team leadership is needed and have deployed a further leadership team along with more man power in another fireteam and additional sniper squad.

The Tanoan people were shocked to see such a violent and sudden burst of violence, with Law enforcement officials contacting Ion requesting numbers of hostile combatants as previously violence hasn’t been seen with the ongoing troubles, Officials and Ion believe this group must be receiving financial aid along with mercenary soldiers from an as yet unknown source.


Ion has received word from a local source that a militia has captured a town on the south eastern most island of the archipelago. The Town Lijnhaven (Haven) will be the main focus of the operation. The informant made it clear that the militia has brought a shipment of barrels in on the same night as our operation and has since stored them in a large compound in the center of the town. The Militia are also known to have fortified the road in and out of the town and have gangways and built up fortifications on roof tops.

The Operation will happen in 3 stages, the first being a set up stage, the seconds being the attack and the final stage being intel gathering and RTB.

Stage 1 will include Nighthawk ferrying Sealion in 1 littlebird and a tactical assault boat on the other to DZ Splish Splash, once there, Nighthawk will return to base, pick up Hunter team and move to their hold marker and wait until Sealion in the assault boats and Jackdaw are at their respective OPs and Hold markers.

Stage 2 will commence when all teams are ready Nighthawk will land at their LZs (LZ1 & LZ2) dropping Hunter inside the hostile base, Sealion will take the docks and move into the target compound asap and Jackdaw will eliminate any hostile that may pose a threat to nighthawk or indeed any of the friendly forces.

Stage 3 will be the final stage of the operation, friendly forces are to pick the hostile position to pieces for intel that might aid us in knowing who we are fighting and what they are planning on doing with the chemicals they have stolen. Then RTB with all squads, destroying the assualt boat beforehand.

General Order: All Teamleaders and Medics will attach IR strobes to their person so an easy means of spotting for the marksmen.

Sealion 2-2 are to deploy at DZ Splish Splash.

At DZ Splish Splash, Nighthawk will drop an Assault boat which sealion are to mount.

The team are to move to the hold marker and wait untill all squads are in position and green light is given then procide to LZ Shippo and assault the target compound from the docks.

Jackdaw are to deploy at DZ Splish Splash, then move to OP Birdsnest by any means.

Once at the Op, the sniper team is to begin overwatch of the Mission AO and report all useful information to command along with CTab Markers etc.

At the start of assault the sniper team will engage targets of high priority with a focus on threats to the other teams.

Hunter will first be holding at the Ion facility until Jackdaw and Sealion and deployed, when they are nighthawk will collect Hunter and move them to their staging area.

When the green light is given Nighthawk will drop Hunter teams off on the rooftops of 2 key buildings in the compound by means of fast insert with sniper cover from Jackdaw. Friendlies will also be coming in from the docks so it is recommended troops coordinate their attack. and don't start pushing down until all troops are ready.

Nighthawk is to transport Sealion and Jackdaw to the AO along with a sling loaded assault boat.

Nighthawk are to deploy Sealion in the ocean at DZ Splish Splash along with the assault boat, they are then to shift over to the land and drop Jackdaw at the beach.

Once both Sealion and Jackdaw are deployed to DZ Splish Splash, Nighthawk will return to the main Ion Facility and pick up Hunter squad. They are then to move to a holding position until the green light is given.

When given the go ahead Nighthawk will move in and land on top of two key buildings marked LZ1 and LZ2 and deploy hunter squad equally on each.

When all teams are deployed Nighthawk are to move into a defencive position and await further tasking.

All, Once the target location is secure friendly forces are to search for intel and the stolen materials and decide whether it can be returned or has to be destroyed. If it can be airlifted to safety back to the chemical facility do so by coordinating with Nighthawk and making sure the position stays defended. If it is to be destroyed teams are to gather as much intel as possible then retreat via nighthawk, picking up Jackdaw last making sure ALL the chemicals are destroyed.

This will be the main Area of Operation, intelligence tells us that the town itself is occupied by a large number of militia troops with more living outside of the town, along with the militia, the town has a substantial civilian populace mostly people unable to flee or perhaps siding with the other side. Once alerted the whole island's militia garrison is expected to rally so teams are recommended to load up on supplies and be ready for a fight. If leadership feels like the numbers are getting too high a retreat order may be given, as long as the main objective has been completed.

A key point is the hunter hold marker, this is only necessary if Sealion or Jackdaw is not in position, if all squads are ready HUNTER HOLD can be ignored. 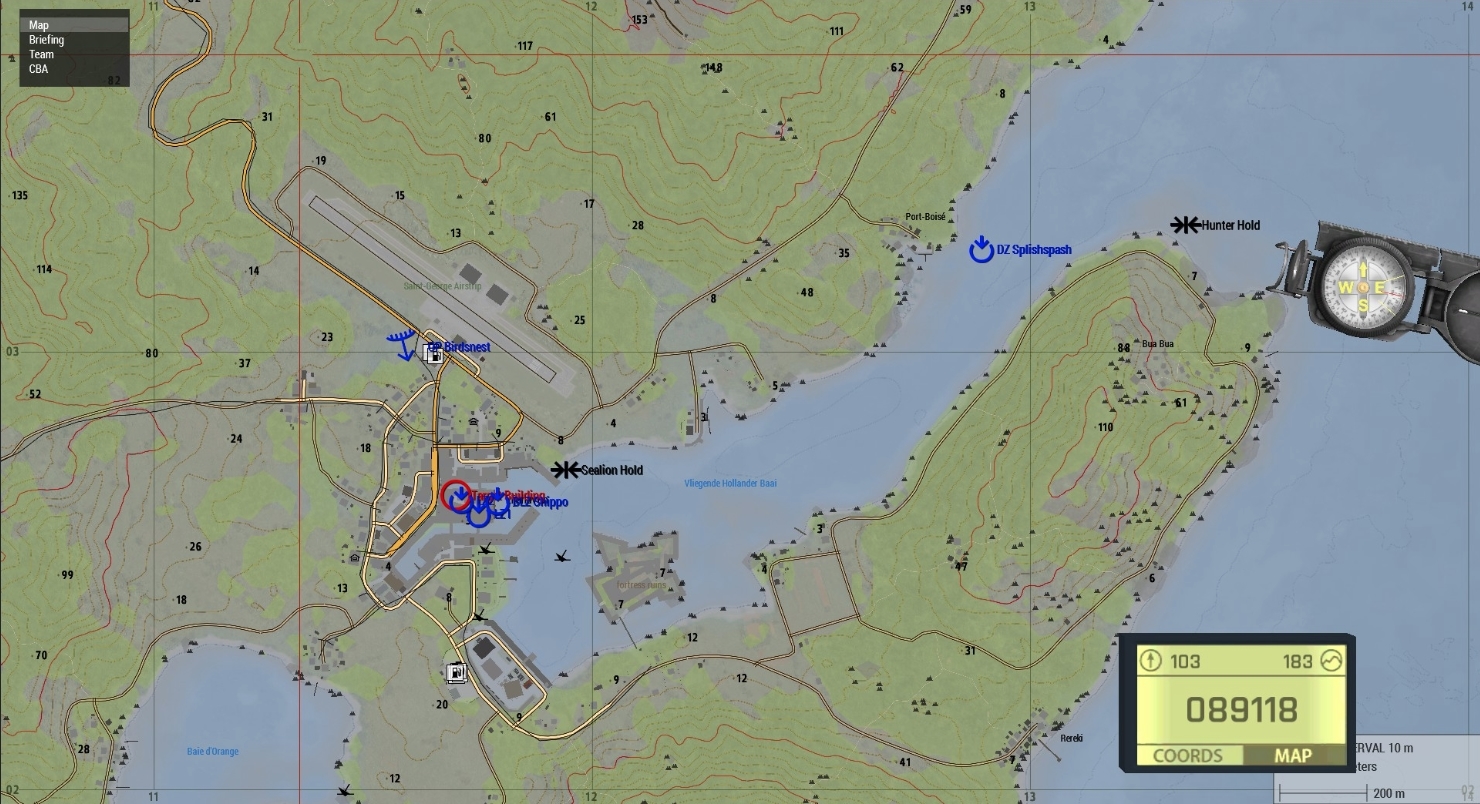 A closer look at the town and the highlighted LZ markers 1 and 2 respectively. These LZ’s are for the Nighthawk callsign. Both LZs are confirmed to be rooftops that a littlebird will be able to land on at speed. Once Hunter squad is deployed on the roof tops they are to move at their own discretion, coordinating with Sea Lion and Jackdaw.
BLZ Shippo (Obstructed by the name of the town) is located in the docks just past the Sealion hold marker. Sealion will hold until all elements are in position for the attack then storm the port of the town. The cover of night will be key to the success of the unit and appropriate clothing is recommended. OP birdsnest will be jackdaws op for the operation, located on a grand hotel next to the airstrip it is blessed with an overview of almost all the keypoint within the town. A sniper team in this position will be vital to cover the insertion of the littlebirds into the ao, rooftop troops or worse static defences will decimate our inbound helicopters. (Sniper team to PM any request for gear in specific and we’ll get it ordered for you.)

A final note from the Ion Corporation Board of Directors, the last operation was not a true demonstration of the company's abilities as we were caught off guard and on the back foot. This operation will be the turning point in this war we have been thrust into without consent, but the board promises, we will come out on top and our enemies will heed the day they attacked our men and our ward. Bring the pain Ion.

-Depending how people feel after the op on sunday, i can run through a brief for leadership folks and those who want to know what the crack is-