All outer islands are now under NATO and Afrene control. Over the coming days we will begin pushing into the Molatian mainland, seizing infrastructure and settlements.
HQ needs settlements along the North-West and West coast of the Molatian mainland territory in friendly hands to secure the river passings and supply routes in preparation for the eventual final assault on the Molatian capital Bolabongo. Molatia has become a cornered animal and is expected to fight as such; take extra care moving in Molatian territory. 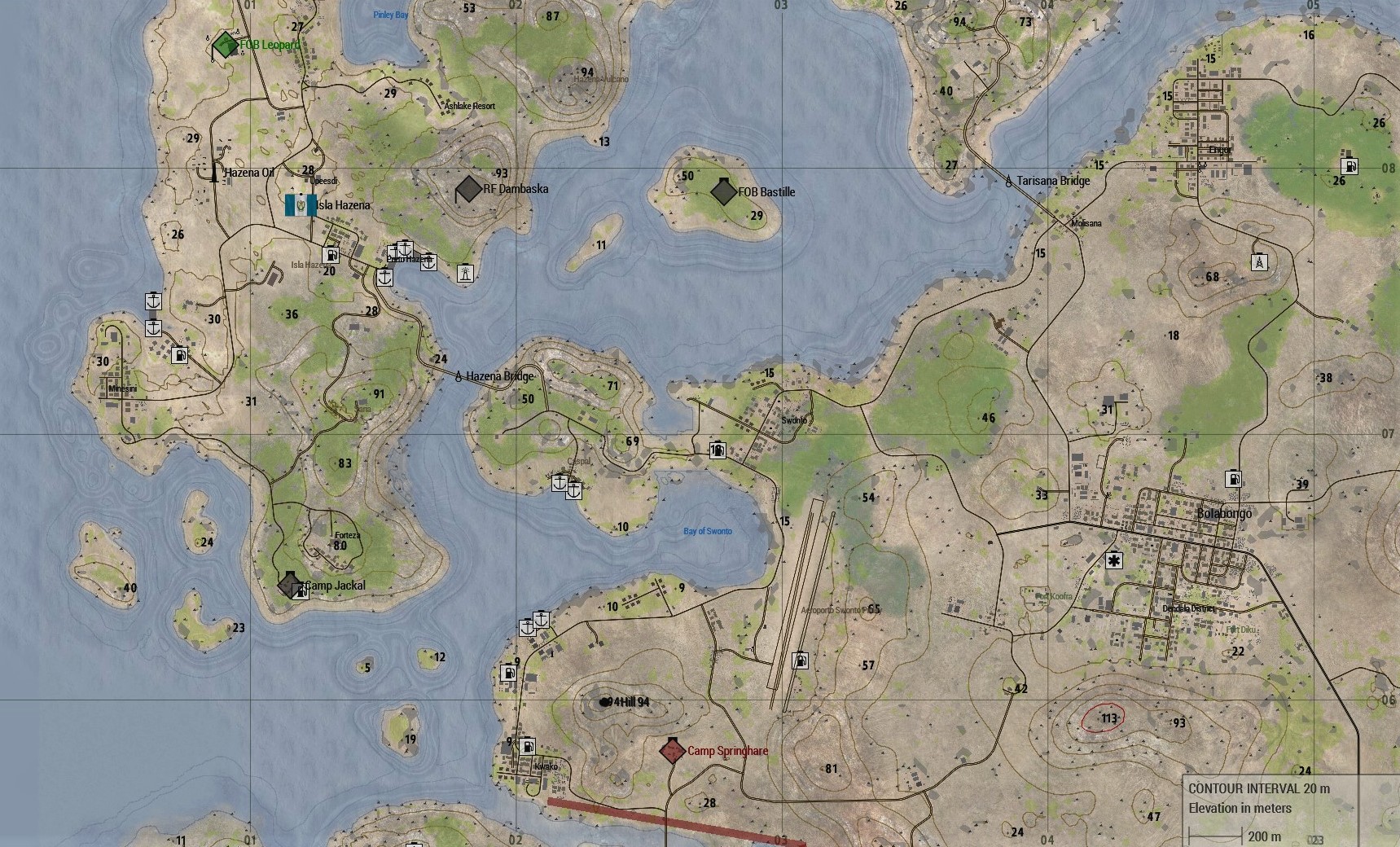 UNITAF will conduct a combat patrol along the aforementioned coast of the Molatian mainland.
Towns Kwako, Swonto, Molisana and Engor are to be secured in preparation for the main attack on Bolabongo. Doing so will allow allied forces to assault the capital city from multiple angles, preventing retreat or effective counter-attack.
Aeroporto Swonto Pinley is a Molatian support airfield that must also be secured in order to hamper Militariga Molatia efforts to fight back. Camp Springhare is a secondary objective containing a medium Molatian garrison that is likely to send out QRFs when Molatian territory is threatened.
The capital city of Molatia- Bolabongo- is reportedly heavily dug in and garrisoned and is to be avoided until a later operation in which an organised assault on the city will take place. UNITAF elements are advised to use the hilly terrain to keep Bolabongo out of line-of-sight so they are not engaged by it. There is a stretch of the planned convoy route which comes into close proximity with part of the outer Northern fortifications of Bolabongo and is to be crossed with caution.

In regards to the missing chemical weapon from Day 7, there have been no further sightings and intelligence teams are attempting to get a fix on it's location. In the meantime UNITAF are expected to be vigilant and attempt to find any intel possible relating to the missing device. Past intelligence has indicated the weapon is intended for use on Afrene civilian populations so finding it is imperative. 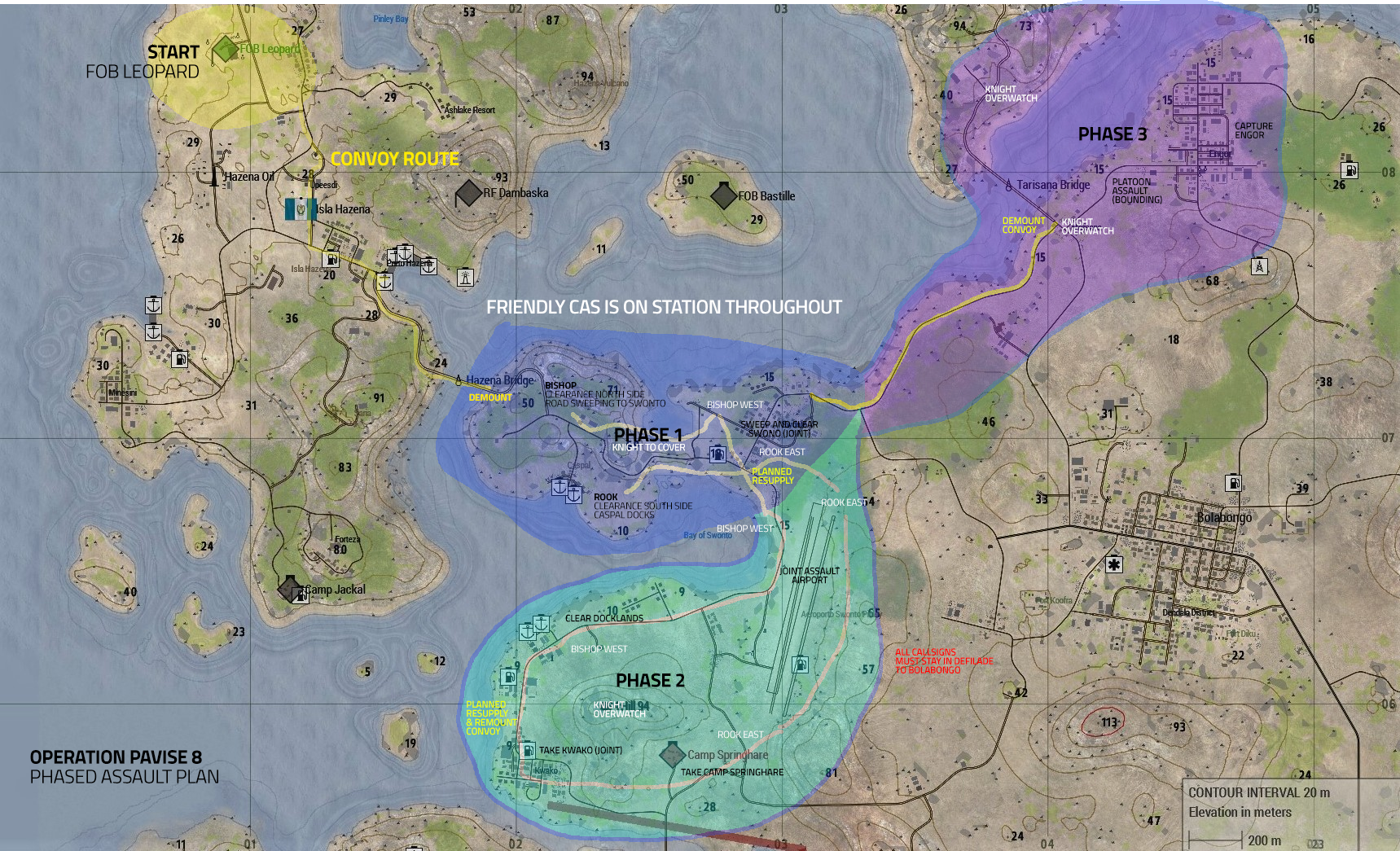 Afrene Army Corps forces have secured the remainder of Isla Hazena thanks to UNITAF actions. FOB Leopard is now AAC-garrisoned and there are AAC patrols defending the island. Expect friendly air and ground movements around Afrene-controlled territory as the AAC prepares for the final push into Molatian territory.

Militariga Molatia forces are backed into a corner and are likely to employ desperate measures to try to hold back the tide of allied forces. Be extra vigilant in their territory.
The Molatian government still backs several militia and paramilitary groups and will likely employ them to bolster the somewhat diminished Militariga Molatia.
Molatia is consolidating forces in the capital and other inland areas and will likely save the majority of their remaining forces for later, 'more essential' fights. Garrison forces will not abandon Bolabongo to assault UNITAF elements but are likely to send occasional QRFs when deemed necessary.

Civilians are to be expected in Molatian settlements. Molatia will likely evacuate areas to which UNITAF and AAC forces are known to be moving, so PID transport targets leaving civilian areas as they may contain refugees. Civilian casualties and property damage must be minimised if Afrene is to secure the territory without heavy civil unrest.

With the storm gone, the weather is expected to be somewhat cloudy with highs of 29°C and 72% humidity.