UNITAF, still staging from northern Limari's Patrol Base Mikis, have pushed the majority of the insurgency over the riverbed towards Morut, Bramar, and Orcarif. In recent days, some fighters have been crossing the riverbed north to counter our patrols.

In the south, the insurgency has been re-enforcing inside civillian towns, trying to halt our advance south and west. While many have fled, civillians have been moving back in, and some insurgents still remain. We expect the majority of insurgent activity to be in Zones 2 and 3, where many previously ANA installations have been taken over.

Following successful suicide bombings of our troops in recent weeks, we expect a more concentrated use of this tactic, so be on the lookout for IED , Suicide Bombers and VBIEDs

Still based at Patrol Base Mikis, our mission is to continue to provide anti-insurgency patrols as far south into the urban sectors as possible, identifying any remaining insurgent buildings and compounds to provide intelligence for future direct action missions. Our initial focus is on Bramar, then moving west over the river towards Morut.

Patrols are authorised to use lethal force against all armed aggressors, and to proceed at their own discretion, within the patrol sector assigned for this mission. A key element of these patrols, is to identify key installations of the insurgency, before they can be relocated as part of the insurgencies fall-back to the mountanious regions. Key hardware an ammunition is located in these strategic locations and must be intercepted.

We expect the majority of insurgent activity to be in Zones 2 and 3, where many previously ANA installations have been taken over. 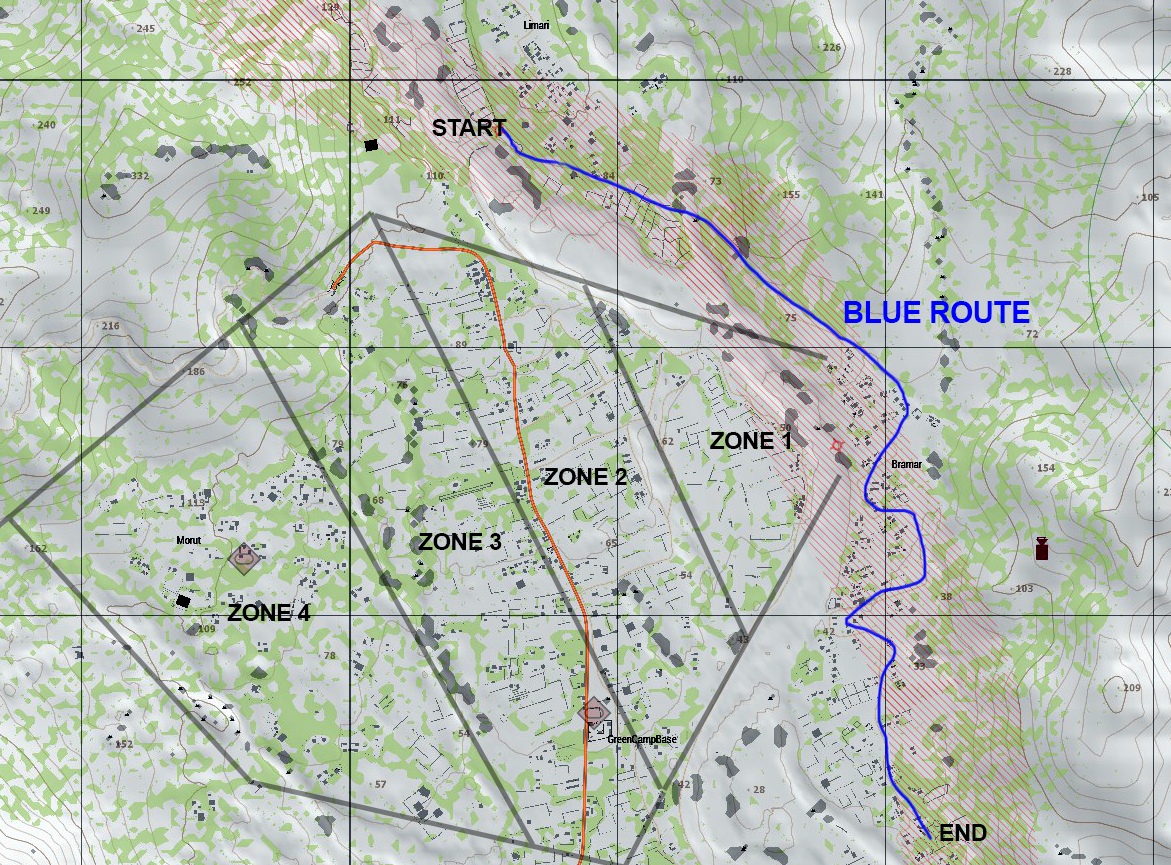 The commanders intent is to acomplish the mission without friendly or civillian loss of life, or the loss of equipment.

We're going to do this with a patrol section element, with the support of up to 2 MRAPs

The patrol will leave from Patrol Base Mikis, patrolling south in a mounted convoy, on the BLUE ROUTE through Bramar, in order to check it is free of insurgents and ISIS control, clearning any relevant structures on route, and gathering intelligence and information about key locations on route. The patrol is authorised to deal with any objectives it finds, at it's own discretion for the duration of the patrol.

Following the completion of the Blue Route convoy, the force is permitted to head west over the riverbed into Zones 1-4, which also need patrolling in order to confirm there is no insurgent presence.

Owing to METT-TC variables we will use 2x 6x6 MRAPs and one Medical Vehicle will be used.

We expect the presence of Caches' Factories and Hideouts to be common, especially in Zones 1-4.