June 2011, Bystrica, eastern Slovakia on the Ukrainian border. The countries persistant fighting intensifies, the incumbant local government is the Russian state supported SAF. Recently the opposing SDF attempted a  coup d'état and managed to secure the support of part of the eastern province.

While the Russian state supports the SAF, they have refused to support them in the conflict, something which NATO seems less hesitant to do. UNITAF have been tasked with arming and supporting the SDF with the campaign objective of forcing the SAF to surrender the remaining installations, and local governement buildings to the SDF, so it can offically take power.

Keeping the local civillian populations on side is the key to success, many are also fighters too. The majority of the poppulance supports the SDF, and will often be heard fighting or firing at SAF patrols. The SAF while aggresive, are aware of the state of the relations and often avoid contact with civillians, opting instead for direct action against SDF operations.

The east is relatively secure, with the SAF having being driven out of most populated areas, as we move west, SAF influence increases substantially, and the majority of key governmental and military infrastructure is located. Especially around the towns of Stary Sobor, and Chernogorsk.

Finally, at this stage in the conflict, NATO has only comitted ground forces and SF units and a swathe of intelligence and surveillance, we expect the campaign to excalate as progress is made, but we need not be seen as the agressors, and so the deployment of aircraft and mechanised units is being held back, to see how we can perform.

Russian State backed, and incumbent armed forces in the region, the SAF.

NATO backed resistance movement, the CDF is made up of defectors, including key former government officials, military leaders and civillians, attempting a coup d'état. 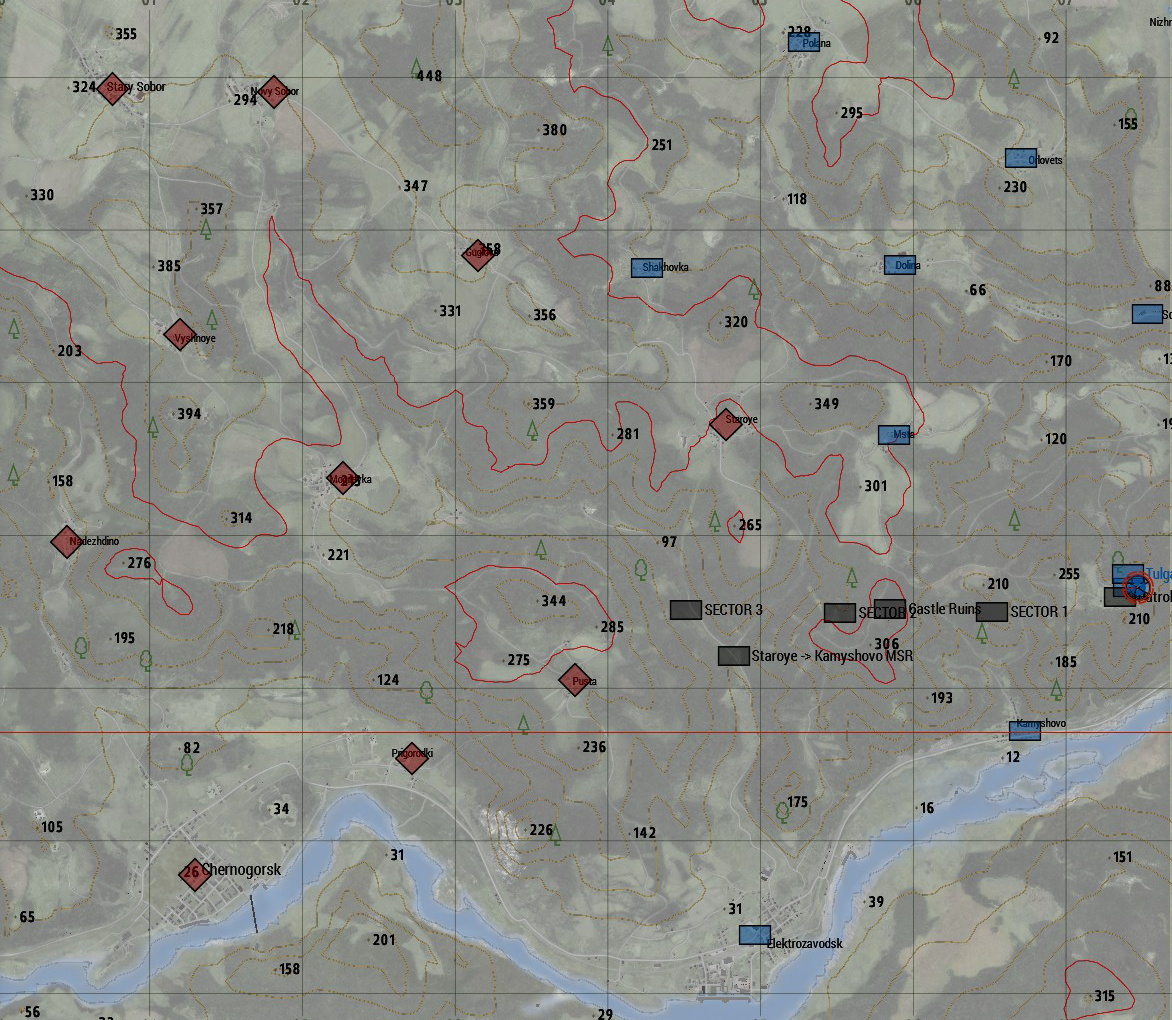 The SDF have transferred control of a rural barracks in the village of Tulga to United Task Force control. As NATOs formost task-force in the deployment, UNITAF have a small and unsuspecting presence. Officially, our role is not a direct one, but the powers at be have other ideas. Politcally, resolving this crisis is a key issue for the nations funding to the task-force, not least the United States, ultimately being seen has having resolved it will, shall we say divert attention from home affairs.

Following a meeting with the local SDF commanders, we've agreed to patrolling the local sector north of Kamyshovo, specifically focusing on a 3km stretch to the direct west of Tulga Barracks, in the middle sits an old castle, but the sector is remote woodland, and has not been patrolled reguarly enough to rule out enemy activity.

Ultimately, we must locate a suitable position for an observation post and a checkpoint to cover the MSR from Staroye to Kamyshovo, so the SDF can start vehicle checks there.


Should all primary objectives be met, the operation will be considered a success.

As the incumbent armed force, the SAF are well equipped, some 20,000 strong but the CDF itself is of similar size, while slightly less trained and equipped. The balance of power though is less clear, the SAF are hesitant fighters due to civillian casualties. The CDF stage out of civillian areas and so our ability to choose our fights is our current strength.

Be warned, we expect the SAF to change it's tact as we gain ground towards the capital. Those left, will be the most loyal to the state.

Recent firefights have seen infantry and motorised/mechanised patrols, with the occasional platoon being sent in for support. Expect to see a lot of aircraft movements, the SAF reguarly move troops around this way as the SDF don't have much in the way of AA Installations. That though - will change soon.

The patrol will be lead by Cpl SoapyTarantula assigned Patrol Commander

Will be conducted in accordance with unit SOP, see ORBAT for frequencies and callsigns.