Background Information
Royal Marines stationed at Jackson Depot are to deploy to deal with various objectives in-between the Canadian and British/ German fronts. Intel found by the Canadians suggests a Russian officer may be hiding out on the Eastern peninsula, and an active defensive line to the North-East of Jackson is holding up the coalition advance further into the territory. Not much is known about the officer other than his name- Vasily Sidorov- and his position as Chief Logistics Officer for the Southern region. Capturing him could provide valuable intelligence for future operations and is a priority.

Supporting Assets
No friendly forces in the area- most of the planned route is technically behind enemy lines.

Enemy Forces
Mostly scout and patrol infantry scattered in woodland, with supporting IFVs in QRFs and a dug-in defensive line to the North.

Tasking
With several taskings not suitable for other forces in the area, UNITAF teams must deal with assorted objectives, chief amongst them being the defensive line North-East of Jackson Depot. According to intel found to the East, a Russian officer is hiding out in the AO and is primarily a capture target due to his valuable knowledge of the enemy force. Primary Tasking -Dismantle the Defensive Line North-East of Jackson Depot -Find and capture the Russian officer Vasily Sidorov [OBJ-B] Secondary Tasking -Secure the Light Defences at the river bottleneck [OBJ-A] -Secure the fortified checkpoint ~2km North of the bottleneck [OBJ-C] -Secure intelligence from enemy installations and HUMINT

End-state
Once the defensive line is secured, helicopter or truck-based extract will be available to return the platoon to Jackson Depot.

Commander's Intent
The intent for this mission is to take out a defensive line that is causing a massive halt in the British advance inland. We are also looking to capture a Russian officer from the Canadian AO.

Phase 3 a) When Charlie 1 & 3 have arrived at the Obj Bravo town, both will move towards each other to ensure the Russian officer doesn't escape. b) When Charlie 2 has secured the defences, they will be moved via Romeo in boats to WP-C1 before moving inland. Phase 4 a) Once Obj Bravo is secure, Charlies 1,2 & 3 will eliminate any remaining Russian forces in the area, before moving to WP3. b) Once at WP3 Charlie will embark in boats to cross the Porolahti Cove. c) Charlie will disembark at the disembark point before heading on foot towards obj Charlie. d) Charlie 1 & 2 will move in to clear Obj Charlie. e) Charlie 3 will provide a BOF, before moving north west to ensure no enemies approach from the defensive line. 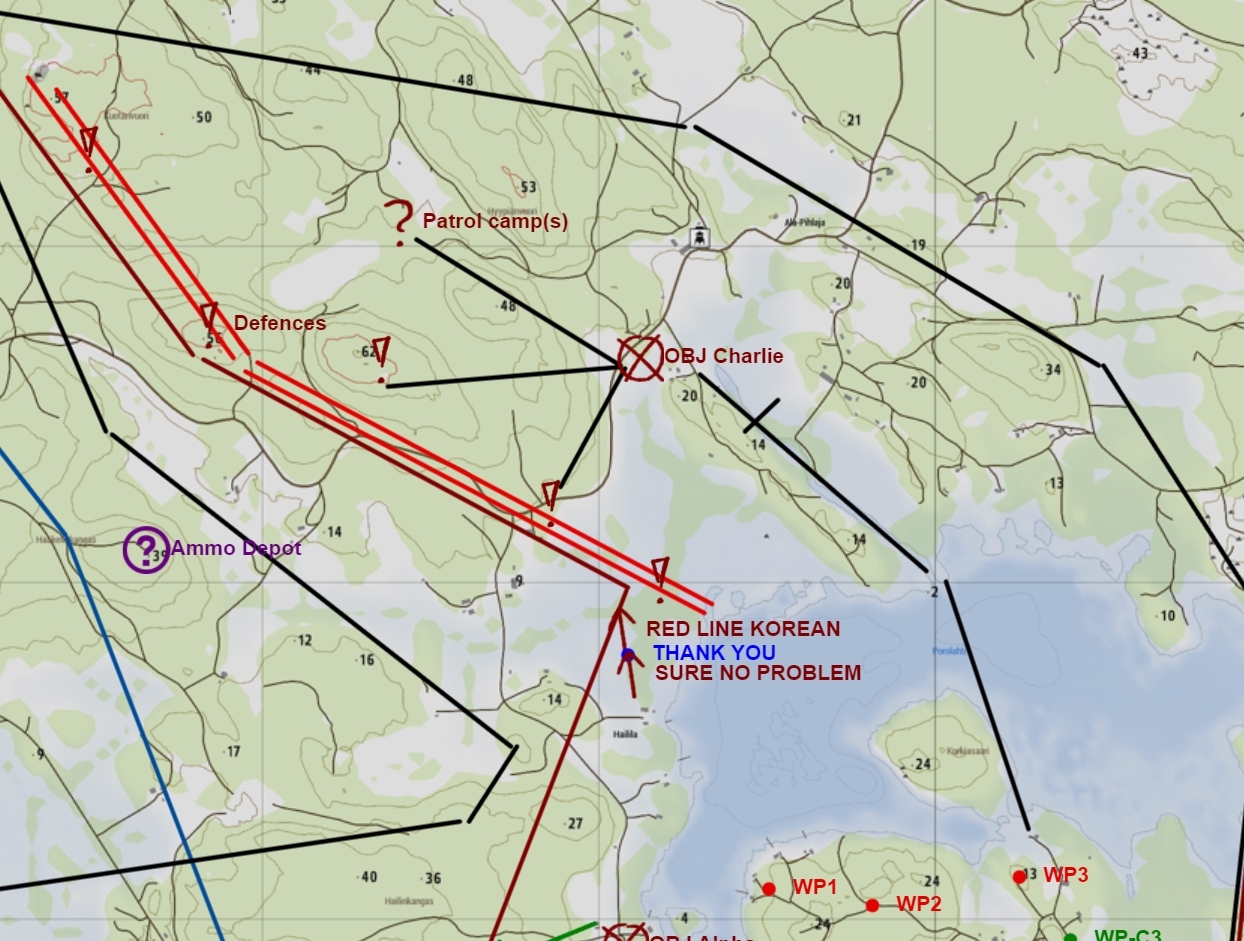 Phase 5 a) Charlie 1 will then move south west to clear any defences so that Romeo can get through with trucks. b) Charlie 2 will move west south west and clear any defences. c) Once Charlies 1 & 2 have cleared any defences on the south western side, Charlie 3 will then begin to push further north west. d) Charlie 2 will move north towards any patrol camps, Charlie 1 will move north west and clear more defences. e) Charlies 1,2 & 3 will then rotate with each other to ensure spread amounts of contact. *Plans are likely to change due to recon via drone* 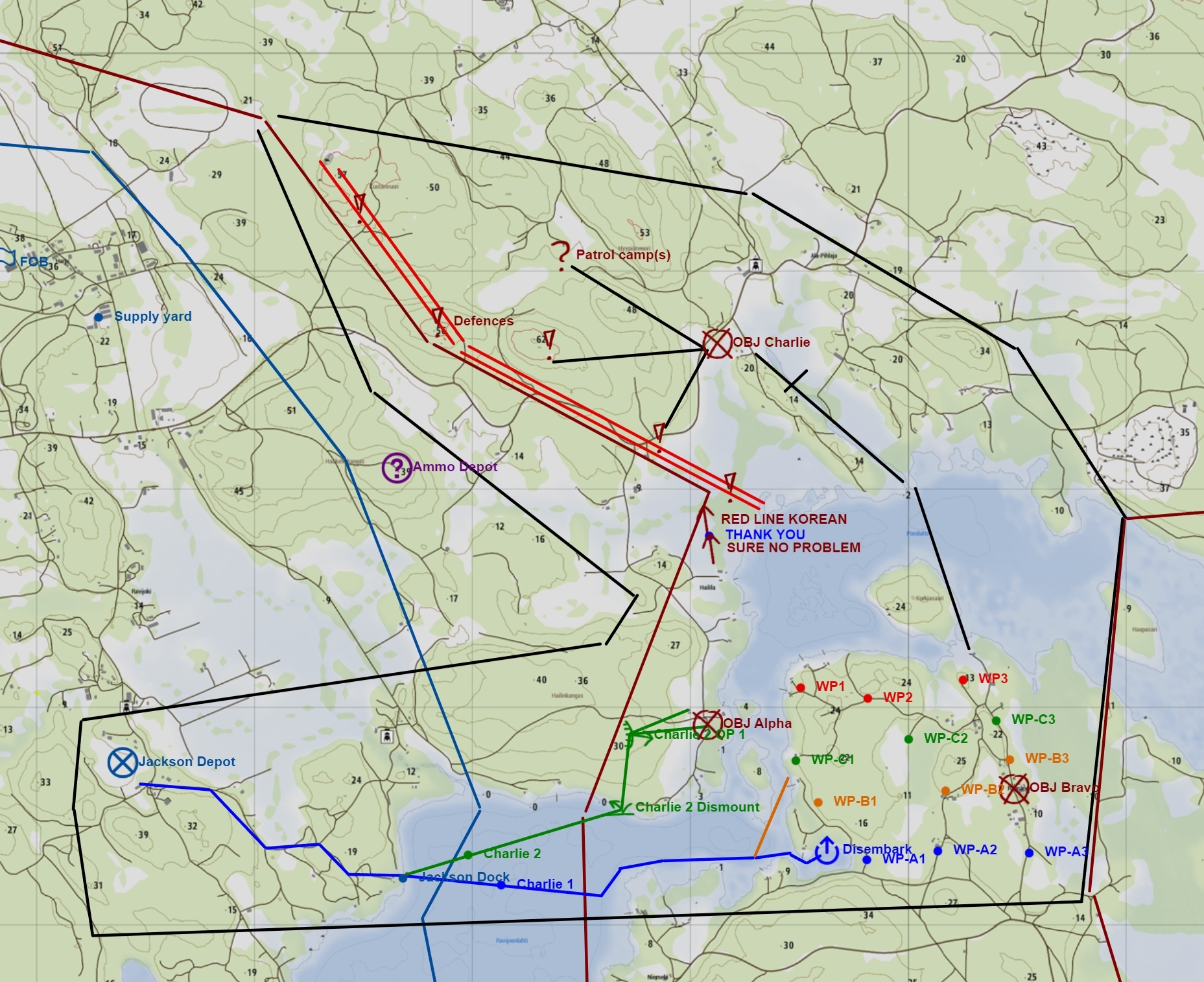 Fire Support Plan
Artillery fire will be made available should stealth cover be broken too early and the friendly force be overwhelmed.