Background Information
2 days after the US capture of the town of Obregan, SLA forces conducted a wide ranging rocket artillery bombardment, scorching all buildings. US Forces conduct a hasty break of contact, during reconnaissance flights one of our fighters was shot down by a number of previously unidentified SAM positions. To rapidly counter the SLA retaliation and to ensure continual pressure as US forces bear down on the Capital City. US Command authorises an audacious morning naval assault from the western flank, in order to subvert costal gun positions, and destroy the newly implemented anti-air umbrella.

Tasking
The mission today is to combat enemy emplaced fighting positions preventing our ground assault to the capital. Intel suggests that on the two small islands, in the outskirts of the Corazol Bay. SLA forces have moved multiple pieces of AA into an old naval fortress along with a good sized infantry garrison. It is imperative that we clear these islands in order to move into northern sahrani from more than one direction. Primary Objective a) Capture Naval Fortress & AA Site b) Capture Coastal Defences c) Assault and clear FOBs, Depots & Checkpoints Secondary Objectives a) Secure any ammo dumps b) Secure any enemy vehicles 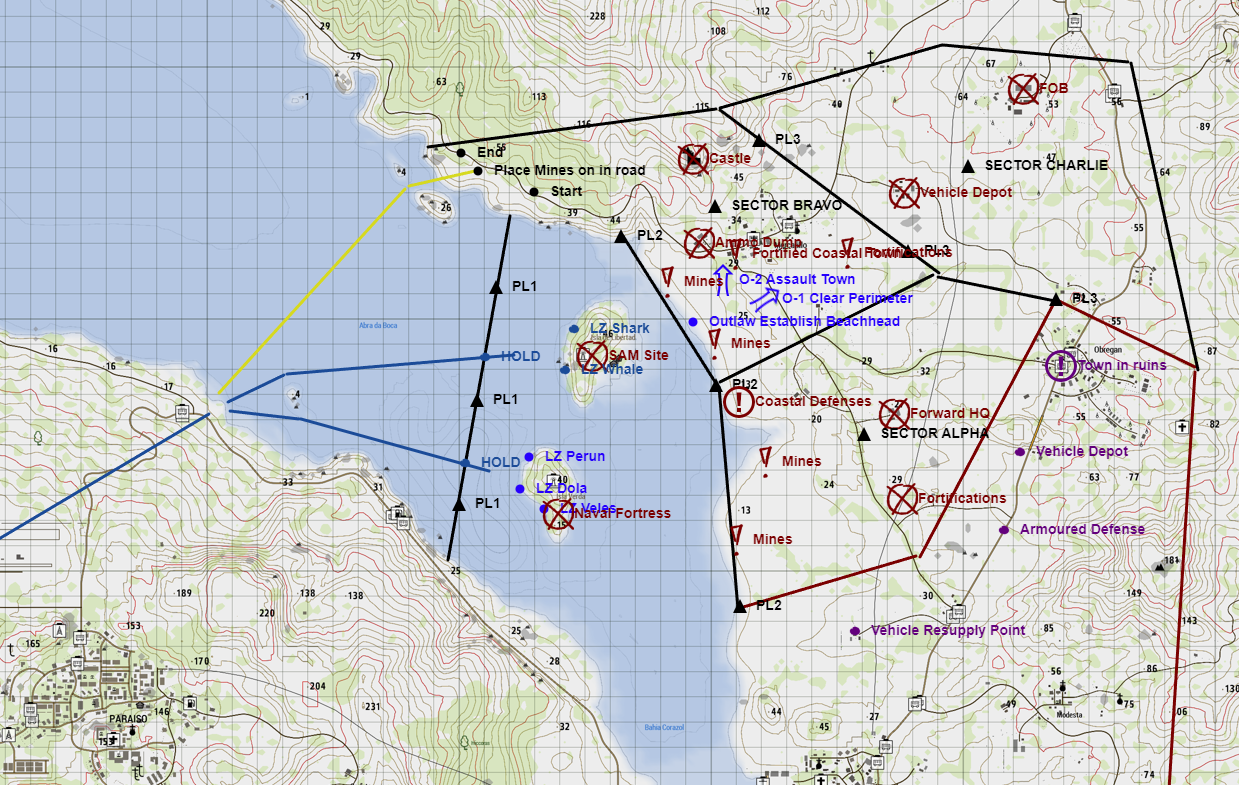 End-state
All objectives secure & endex at the FOB just south of Bagango.

Commander's Intent
The purpose of this mission is to assault enemy defenses from the western flank to allow a ground assault to take place, removing the anti-air umbrella and positioning our forces south of the capital of Bagango.

Tasks and Sequencing
PHASE 0 Both amphibious platoons, fully self sufficient will depart Pariso Airbase in Amtracks, slipping into the Abra da Boca bay in the early hours. Long range artillery will commence fire missions on key targets to soften enemy fortresses and flush out infantry from emplaced positions. The assaulting forces will hold at the Phase Line 1 to confirm that artillery has shifted from the landing zone. PHASE 1 WARLOCK Platoon, will land on Isla de Libertad, securing the SAM site and taking up defenses for a counter attack. OUTLAW Platoon, will land on Isla Verda, capturing the naval fortress BADGER/BLACKSMITH callsigns move to the north coast of Abra da Boca Bay to emplace a minefield on a suspected reinforcement route. 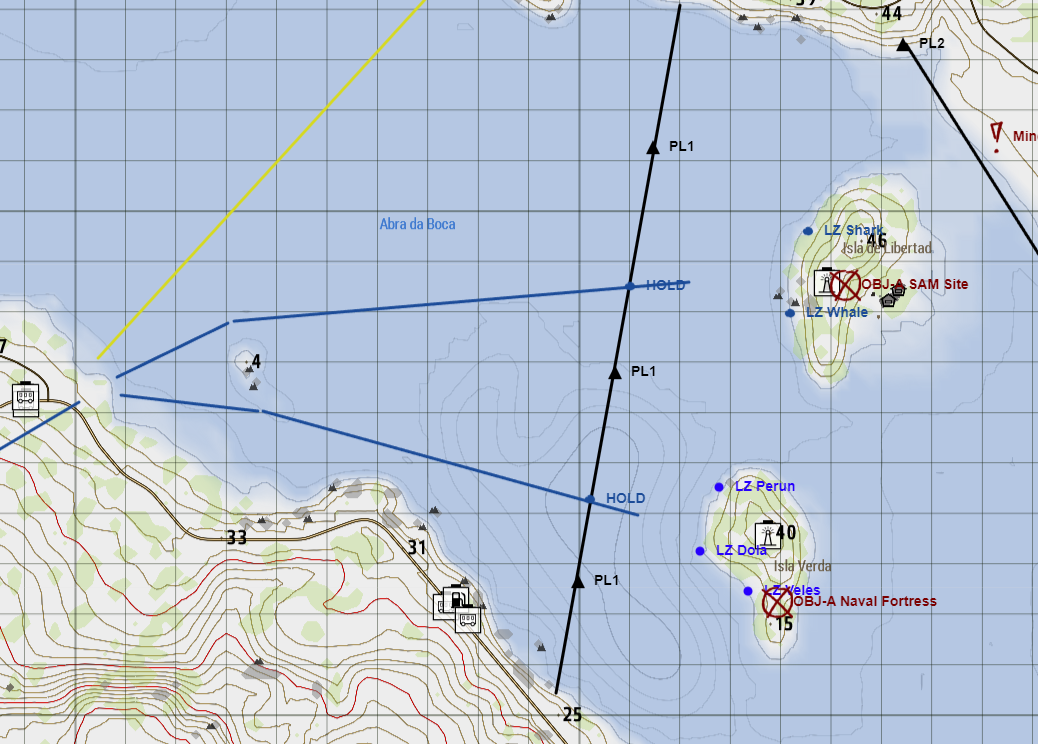 PHASE 2 WARLOCK Platoon will set up base of fire on Isla de Libertad to allow OUTLAW Platoon to maneuver to the landing zone on the northern beachhead. Once OUTLAW is established in Sector Bravo, WARLOCK lands on the same proven beachhead and pushes south into Sector Alpha to commence Phase 2 clearance with each platoon clearing their sector of defenses. BADGER/BLACKSMITH to setup Logistical point and CCP at Sector Bravo and clear mines from the beachhead. PHASE 3 All callsigns enter Phase 3, Sector Charlie to capture the military garrison and defend it from counter attack.

Resupply
All teams should cross Phase 0 fully loaded, using the integrated Amtracks as additional equipment storage due to manpower shortages for assistants for machine gunners and anti-vehicle personnel. Additional and emergency resupply will be provided by BADGER/BLACKSMITH by ground and naval assets.

Medical
The primary means of medevac is by ground based medical support units.