Fixed-Wing attack types share some similarities with their rotary-wing counterparts, but due to the speed at which the aircraft moves and the differences of FW flight compared to RW flight, they are distinctly different attack types that must be mastered separately.

A fixed-wing break-off attack is used to avoid flying over a danger area. Because of the speed at which a plane moves, break-off attacks typically are used when firing air-to-ground (AGM) missiles. The aircraft can fire the missile from extended ranges and break well before coming into effective range of the enemy air defenses. 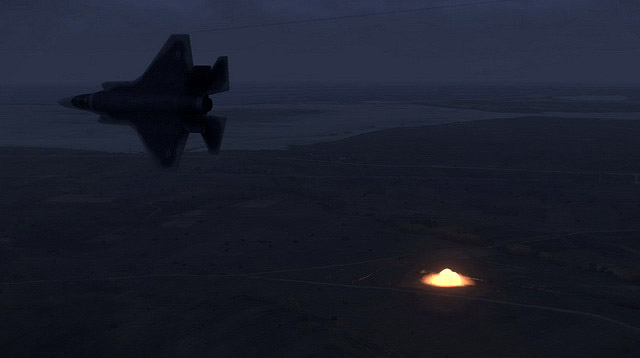 A diving attack is the preferred method for delivering rockets, laser-guided bombs, cannon fire, and 'dumb' bombs/munitions. This is because the "long axis" of the ordnance delivery becomes shortened when coming in at a dive, and thus ordnance tends to land closer together and human error (ie: timing of a bomb drop) is minimized. When conducting a dive attack, two methods can be used during the approach. The first is a high-altitude run-in, followed by a dive onto the target and ordnance delivery.

The second method is a low-altitude approach, using terrain to mask the aircraft, before pulling up into a steep climb followed by a dive and ordnance delivery on target. This is known as a "Pop-Up" attack.

Note that when it comes to dive attacks, the steeper the dive is, the more accurate the ordnance delivery will be - to an extent. The reverse of that is that the steeper the dive is, the faster you are likely to close on the target, and the harder it will be to acquire/align/fire/pull out. Finding a good balance between dive angle, aircraft speed, and other delivery considerations is key to mastering the dive attack. Note also that the higher that laser-guided bombs can be dropped, the more time they will have to adjust their flight and zero in on the laser designation. With cannon fire, the further away it is initiated, the more 'spread' there will be to the impact area, and the more damaging it will likely become. 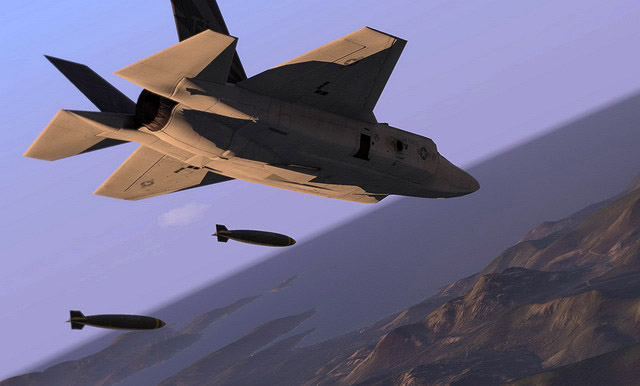 The most basic fixed-wing attack run is a slashing attack or strafing run. In this attack, the aircraft flies in, fires cannons, FFARs, or other munitions and then flies over and past the target.

Slashing attacks typically are done at a shallow dive or during level flight (depending on the target being attacked, the terrain it is on, etc). The pilot should maneuver his aircraft in an evasive fashion up until the last possible moment, as this gives the enemy less time to settle their sights on his aircraft. Direct attacks against anti-aircraft artillery such as Shilkas are done in an undulating pattern where the attacking aircraft pitches up and down, firing each time his weapons are aligned with the target, with the rest of the time acting to throw the Shilka's aim off. 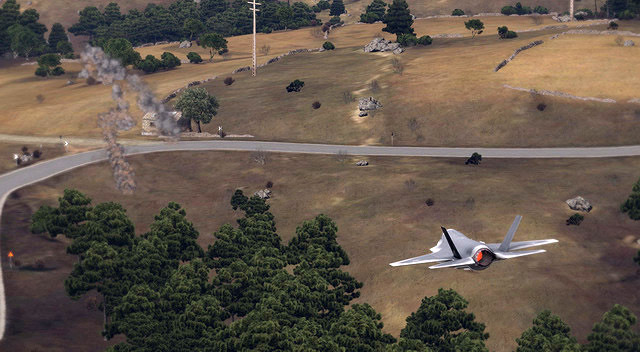 An F-35 making a cannon run on enemy infantry positions, part of the All in Arma mod