In Arma, these are a bit more powerful and precise than their real-world counterparts and are quite useful weapons. FFARs give an aircraft a large number of high-explosive warheads which can be fired with good precision at the enemy. They have a moderate blast radius and are very effective against infantry, vehicles, and light armor. These are best employed from rotary-wing aircraft, but still pack a punch when employed from fixed-wing craft. FFARs can be used effectively in any quantity required, from a few rockets fired at a single target to an entire barrage being placed on an area target.

The AH-99 Blackfoot is armed with DAGR rockets that can lock onto and guide towards ground targets. These rockets have limited maneuverability and a narrow launch cone - fast-moving ground vehicles or large amounts of correction required will tend to cause them to miss their target.

Hellfires and Mavericks fall into this category. They are lock-on, fire-and-forget (in Arma) missiles that are perfect for knocking out tanks and other priority vehicle targets.

The AGM-65 "Maverick" is fired by the A-10 Warthog and will knock out anything on the battlefield with a single hit. TOWs and Hellfires are carried by helicopters, by comparison, and do a slightly lower amount of damage that is generally capable of taking out armored vehicles with a single hit.

These come in a variety of sizes, from 500 to 2000 pounds. They are a bit on the difficult side to be accurate with, due to the lack of a CCIP (continuously calculated impact point) feature on the heads-up display - though some realism mods do introduce such functionality. However, if you can get these to land close to a target, you'll probably obliterate it. These are extremely effective in the urban environment, against all types of vehicles, and of course against infantry. Most buildings can be flattened by 'dumb' bombs, killing everything inside of them in the process.

Same as the dumb bombs, except fitted with guidance fins and a laser tracking package that allows them to guide in on a spot of reflected laser energy. With proper employment these are the deadliest CAS munitions around. Landing one of these on-target will obliterate it and everything around it. The only tricky part is practicing good FAC/CASAP coordination to ensure that the right target is lased, and that the delivering aircraft is able to drop the bomb where it's needed. 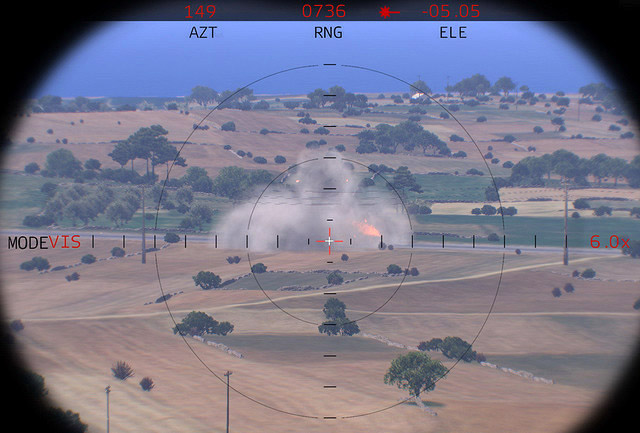 The effectiveness of CAS cannons depends largely upon the type of cannon. The 20mm cannons on the Banshee and Cobra are best at destroying light armor, vehicles, and infantry. Naturally, the Cobra and Banshee are best able to engage infantry with their cannons due to them being rotary-wing aircraft that feature a swiveling cannon. The Banshee, on the other hand, is a less-than-ideal platform for its 25mm cannon due to its high speed and the requirement for very high precision and sustained hits to cause damage to heavier targets. A Banshee pilot is much better off using his bombs than trying to score kills with the cannon, though the cannon can be used to good effect against light targets.

On the other side of things, the Apache has a very powerful 30mm cannon that can make short work of most everything on the battlefield. The A-10 Warthog has an even more impressive 30mm cannon that can tear through most tanks like a knife through tinfoil. Both of these aircraft can do an enormous amount of damage with their cannons and should view them as a primary rather than secondary armament.