One of the most damaging events to an airborne assault, particularly one done at the platoon level, involves a helicopter being shot down before reaching or upon reaching the landing zone. Thanks to the damage model of Arma 3, helicopters can oftentimes land semi-successfully after taking heavy damage. While this will likely result in many wounded and likely several killed in the helo, the chance for people to survive is significant and must be acknowledged. Just because a helo goes down does not mean that all hands aboard were lost! 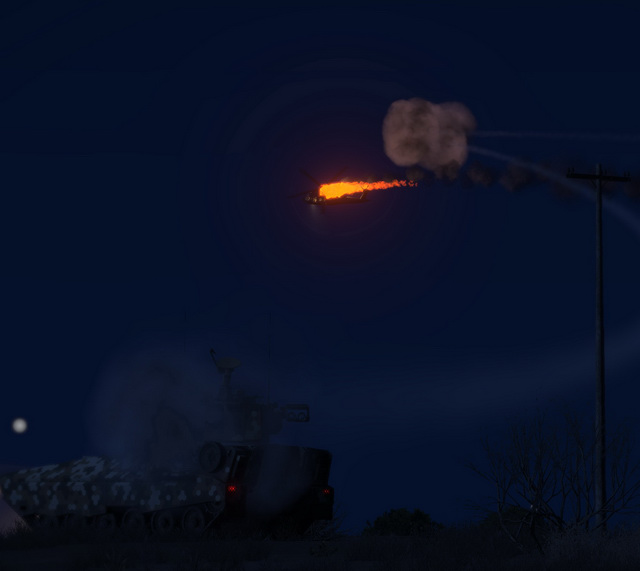 A Tigris lands a critical missile hit on a Ghosthawk. When an aircraft is going down in flames, you can reasonably expect no survivors.

The steps for reacting to a downed helo start as soon as it looks like an aircraft is going down. These steps are typically carried out by the pilot, navigator, copilot, or door gunner - the roles most likely to have a good visual on things.

Bear in mind that the mission commander will be involved in the decision-making process for a downed helo scenario and will be giving orders as needed. The ultimate goal is to rescue any survivors of the crash, but it will be up to the commander as to how exactly that will be done, given the tactical situation at the time. 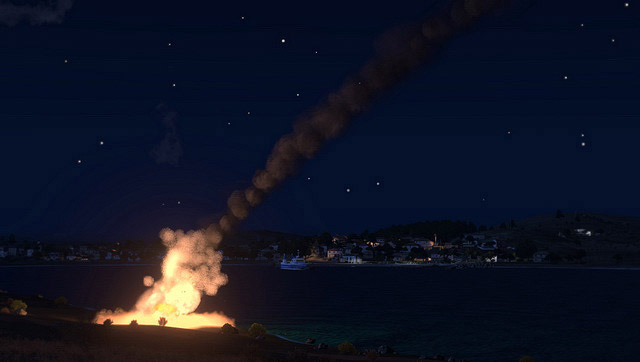 Sometimes it will be rather obvious that nobody walked away from a crash...

The other "worst case" scenario involves landing in heavy contact, where the helicopters are coming under concentrated and accurate fire before they get on the ground, or are ambushed upon landing.

The threat to the landing force must be rapidly evaluated. If the helos can land safely and offload their troops, and the troops will be in a position to effectively engage the enemy, the landing should continue as planned. If the threat is particularly high or the LZ has been compromised by the positioning of enemy forces, shifting LZs becomes necessary. Announcing an LZ abort or shift of LZs is critical to ensuring that trailing aircraft know not to continue their approaches.

Note that consideration must be paid towards any friendly elements that are already on the ground - if one helo disembarks troops and the second is shot down, the third should make every reasonable attempt to land close enough to support the players already on the ground. If all helos are on the ground and disembarking troops when an ambush is sprung, they may be faced with a tough decision - offload the rest, or abort the drop, hope that the people on the ground can hold out, and drop the rest of the troops close enough that they can move to support their comrades in short order and potentially attack a vulnerable flank or rear of the ambushing forces. Whatever the case, the decision must be made rapidly and announced clearly so that a coordinated response can occur.

An emergency landing is typically the result of unexpected damage to the aircraft. Fuel leaks or damaged tail rotors can cause this, as can outright engine failure. It can happen anywhere - at the LZ, over random enemy territory, in friendly territory, and even over water.

The steps for dealing with an emergency landing are as follows.