Due to the altitude they operate at, helicopters are apt to get shot up. Being familiar with the types of damage that can be sustained can help to prepare a helo crew for what to do when they take heavy fire, allowing them to react appropriately even when the situation is tense and every second counts.

Arma 3 utilizes a damage indication HUD element to convey information about the status of various components of the aircraft. This damage indicator is in the upper-left of the HUD and is broken down into five sections - ATRQ, MROT, ENG, HULL, and INST. They start off white - indicating working systems - and shade from yellow to orange to red to indicate damage and, eventually, destruction. The indicators themselves are as follows.

Bullets impacting the tail rotor, or explosions near it, can damage the tail rotor or outright destroy it. The tail rotor is responsible for counteracting the torque produced by the main rotor in a single-rotor helicopter design - when absent or damaged, the helicopter will rotate in the direction of the main rotor's rotation thanks to this torque effect. Damage or loss of a tail rotor can be a very serious situation for pilots and must be understood in order to survive such an eventuality.

If at high speed and the tail rotor is damaged or destroyed, the helicopter will not visible react. You'll know you're damaged by looking at the damage indicator on the HUD - if you're unsure about the level of damage and are flying with other aircraft, a visual inspection of your tail by another aircraft can be requested. They'll be able to see if the rotor is spinning slowly (damaged) or stopped (destroyed).

At low speed, the helicopter will begin to yaw to one side as the tail rotor blades spin down. There are a few critical moments at the beginning of the process that should be used to get the helo down on the deck as quickly as possible, before the full spin begins. Once the full spin begins, having something like a TrackIR is of great use due to the fact that you'll want to be spending a great amount of concentration on both controlling your flight and scanning the terrain (while spinning heavily) for any safe area that you can set the helo down on.

If using an analog rudder control such as rudder pedals, tail rotor damage can be mitigated somewhat by using opposite rudder relative to the direction of torque. Bear in mind that the torque of the main rotor will reduce when collective is dropped and rise when collective is raised - when you are fully down-collective, the helicopter will no longer spin due to lack of tail rotor, while full up-collective will cause the hardest spinning to occur. Lowering collective prior to touchdown helps to reduce the chances of a fatal spin at low altitude.

Alternatively, a helo at low-speed can try to gain speed until the effects of the tail rotor (or lack thereof) are nullified by the higher speed. This is known as the 'weathervane' effect - the aircraft will stabilize into the direction of the airflow, rendering the tail rotor less influential at higher speeds. This will temporarily remove the issue; however, you will still need to set down eventually, and at that point you'll have to fight with the spinning at low speeds. Also bear in mind that a hit that is powerful enough to cause tail rotor failure will also often cause a fuel leak.

In the event that you have tail rotor failure at low speed, the best procedure is to gain altitude to at least 150 meters, then lower collective fully. Lowering the collective reduces the main rotor's torque effect, causing the helicopter to not need anti-torque influence to stay steady - in effect, this makes the damaged or destroyed tail rotor a temporary non-factor. While down collective is held, your aircraft will be descending - as it does, it will stabilize and stop spinning. At this point, pitch forward until you gain enough forward speed to "weathervane". You will end up in controlled forward flight, and the lack of a tail rotor will not affect you until you once again slow down.

Reacting to tail rotor failure is something that needs to be practiced in a non-combat situation many times before it becomes second-nature. 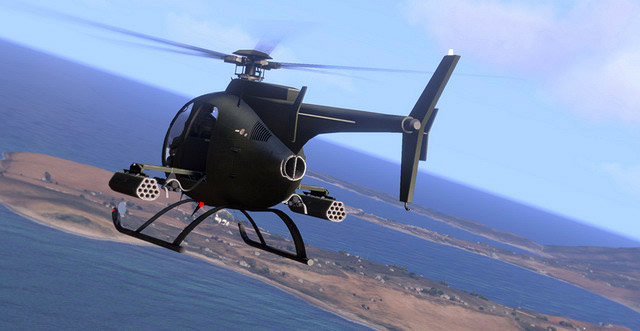 Missing something? This AH-9's tail rotor has been completely torn off

The worst thing that can happen to a helo, aside from outright being destroyed, is for it to have an engine failure. Some mods (realistically) do not allow for the pilot/crew to bail out with a parachute, meaning that the only way to survive an engine failure is to get on the ground as quickly as possible without killing yourself and everyone else in the process. To accomplish a safe landing in a helo that has lost it's engine requires that you be familiar with the concept of autorotation, and are able to carry out the required actions with split-second notice and timing.

Surviving an Engine Failure via Autorotation

Like everything else concerning helos, autorotation is a skill that must be practiced extensively in advance.

Note that due to current flight model limitations, you will be unable to attempt an autorotation if the helicopter is moving at a very high forward speed at the time of engine failure. In such a case, the helo will nose down, become unresponsive, and spread bits and pieces of your body all over the terrain at the site of the crash. At most speeds below the aircraft's maximum, autorotation should be an achievable goal. 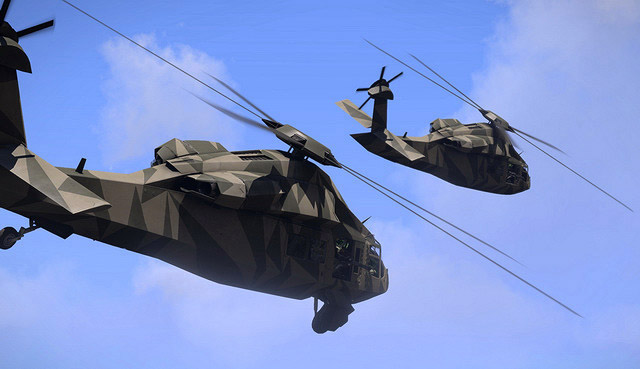