Flying troops to a landing zone is only part of the problem. Once there, getting them safely on the ground can be a challenge all by itself. It is important that every helo pilot is familiar with the landing options available to him, and is able to pick the right one to suit the situation at hand.

A touchdown insertion is the most common type, used whenever possible. All that is required is a helicopter-sized patch of relatively level open ground to set down on. This type of landing is also used when extracting troops, for obvious reasons.

Touchdowns ensure that infantry are able to safely dismount without the injury that is possible when conducting hovering insertions. 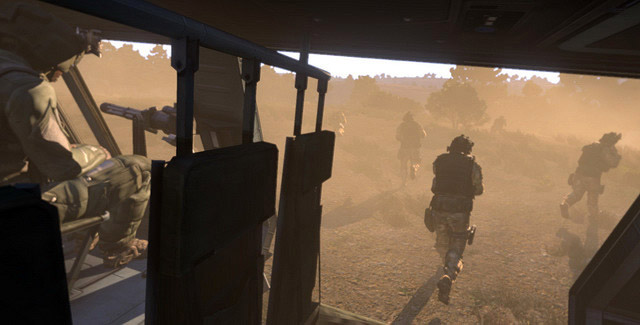 Hover insertions have two primary uses. The first is when dropping troops on sloped terrain. In most cases, trying to land on sloped terrain is a recipe for disaster, so dropping your troops off from a hover is a great alternative to crashing and killing everyone.

The other use is any time that enemy return fire is a significant threat. In such a situation you want to minimize the amount of time that you're low, slow, and vulnerable to the enemy. Keeping your skids or wheels off the ground is one great way to accomplish this, as it allows you to more quickly get back into the air if things turn hot. A safe altitude for dropping troops in a hover is below three meters. Anything more runs the risk of injuring the troops from the fall. 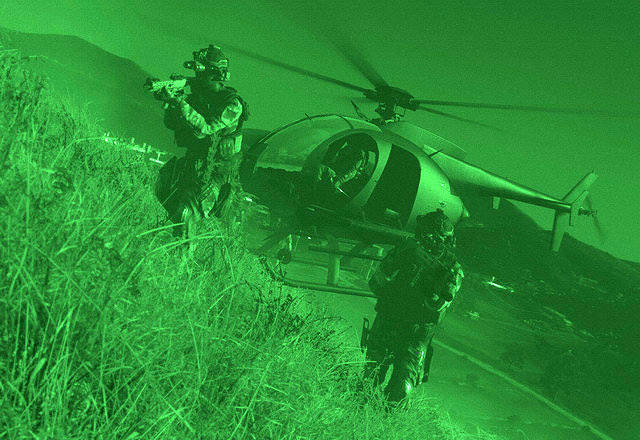 A moving insertion is a variation of the hover insertion that is done while the helo does not come to a complete standstill. This method is even more secure than the hover insertion, as the pilot is at less risk of being hit in the cockpit by enemy ground fire due to his constantly shifting position. When doing a moving insertion, ensure that the aircraft stays under 30kph and is less than three meters off the deck. These are the thresholds for safe troop drops from a moving helo. 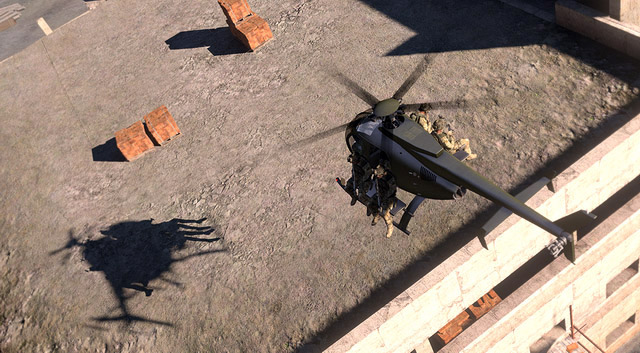 Rooftop insertions can be done either at a hover or by landing on the roof - it's up to the pilot to decide which method suits the situation best.

When doing a rooftop insertion, pay special attention to the rooftops of other nearby structures. If they are occupied, the insertion will likely need to be aborted due to the danger of being shot out of the sky. If the ground around the location is potentially hostile, attempt to land centered on the roof to present the smallest target to those at ground-level. If threats are expected primarily in one direction, land on the side of the roof furthest from that direction.

Bear in mind that the security of a rooftop insertion depends largely upon the surrounding terrain, the surrounding buildings, and the height of the building that is being inserted on relative to both the surround building heights and the surrounding terrain. For instance, trying to drop troops on a low house in hilly terrain that has enemy infantry likely positioned in the hills, or other locations that are higher in elevation than the roof, is a recipe for disaster. On the other hand, dropping a sniper team on a very tall building in relatively flat terrain is much more likely to be successful.

Anyone who has seen Blackhawk Down should be familiar with the concept of fastroping. While this capability does not exist with any of the default Arma 3 vehicles, it has historically been added shortly after release for each Arma game via a community addon. Fastroping can be useful for inserting troops into an area where the helo cannot easily land - in Arma terms, this typically means thick forests, steep mountainsides, or sharp ridges. While the altitude of the helo makes it more vulnerable to enemy fire, it also allows for the doorgunners to fire without risk of hitting the disembarking troops.

Very careful consideration must be made as to whether a fastrope insertion is necessary. While they look cool, they are quite dangerous to employ due to the time required as well as the vulnerable altitude of the aircraft required.

A pinnacle landing is a method by which a helicopter can deploy or pick up troops from terrain that it could not properly land on. This is often seen with large aircraft like CH-47 Chinooks, where the aircraft lowers its ramp and backs up against a slope such that troops can enter or leave it without the helo actually setting fully down. Pinnacle landings require good coordination between the helo's crew chiefs and pilot.