Your responsiblities when in formations

To keep an approprioate interval, it is cruical to be in the right stance to not be too slow or too fast.
The stances with speeds and keybinds are as follows:

Video: A visualization depicting the Soldier’s Manual of Common Tasks (STP 21-1-SMCT) task Move as a Member of a Team (071-COM-0501). This was developed for the Center for Initial Military Training, FT Eustis, Va. This visualization has been approved for public release.

These are the four main formations that you will see used the majority of the time. The common theme is that they are easy to establish, control, and are very flexible.

The wedge formation is a very versatile one that is easy to establish and control. It allows for good all-around observation and security, and can be used in the majority of situations encountered. Fire can be placed in any direction in good quantity, and a shift in formation upon contact is easy to accomplish to suit where the contact came from.

If used at the platoon level, the Platoon Commander typically trails behind the leading squad, putting himself in the middle of the formation where he can best control things. When used at the fireteam level, the Fireteam Leader is the tip of the wedge, and the fireteam members guide off of his movements.

The wedge formation is the one most naturally assumed during gameplay, and is also the preferred formation to use when moving through areas where contact could come from any direction.

When not otherwise stated, the default formation for Fireteams is the wedge formation.

Keeping proper interval while moving as a fireteam in wedge formation

Note that when transitioning a wedge into a line, the 2nd and 3rd elements simply move forward onto the left and right of the leading element, respectively.

The line formation is well-suited for advancing towards a known or suspected threat with the maximum number of guns brought to bear, and excels at placing a heavy volume of fire to the formation's front. 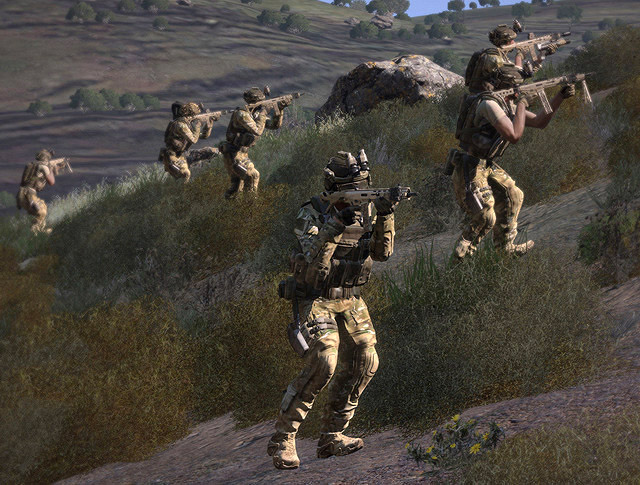 A fireteam advancing on-line up a hill

The line formation offers great overlapping fields of observation and heavy fire to the front. It is relatively easy to control, but suffers from being vulnerable to flanking fire. It also does not offer great flank or rear security, and should be employed with that in mind. It is natural for a line formation to 'bow' in the direction of movement slightly, as in the above picture. How tightly to control this is dependent upon the terrain and enemy situation - keeping a perfect line can result in players paying too much attention to their formation, and too little attention towards the threat of enemy contact.

The column formation is the simplest formation to establish, as it is merely a matter of follow-the-leader. It allows for very rapid movement because of this. This formation is best used during travel when contact is not imminently expected or speed is a high priority. 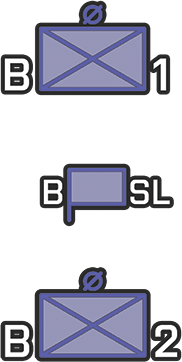 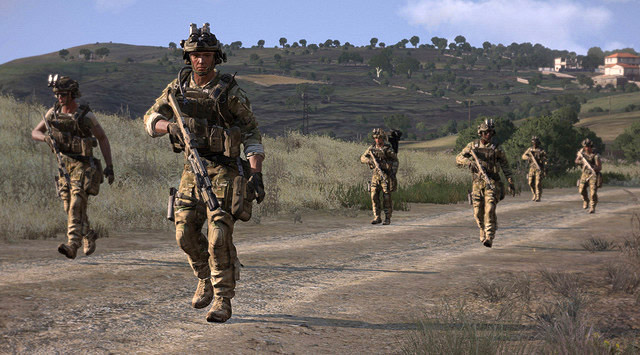 A column formation has great firepower to the flanks, but is not geared towards contact from the front (which it is vulnerable to). A column can rapidly shift upon contact to a line or other formation where appropriate, giving it good flexibility.

Column formations can be used when traveling through an area where it is not practical to spread out into a line, wedge, or other formation. For instance, travel through a restricted valley might require a column.

It is important to note that "column" formations should not consist of one-after-the-other perfectly-lined-up troops. Staggering the column so that nobody is directly in line of each other helps to reduce the vulnerability that the formation would otherwise have from the front and rear.