Military operations in urban terrain (MOUT) and close quarters battle (CQB) is easily the most dangerous environment for infantry to operate.

Threats can come from above, or appear and disappear in an instant in the urban clutter. The fighting is fast, violent, and confusing. Good communication is needed at all levels to provide timely information as well as avoid friendly fire incidents. MOUT combat must be done at a deliberate, methodical pace, and all elements need to be able to move in a cohesive manner that prevents anyone from getting cut off or lost, and maintains a very high level of situational awareness and defensive cohesion.

There are several tips for the infantrymen operating in these environments.

Maintaining 360 security before clearing a building 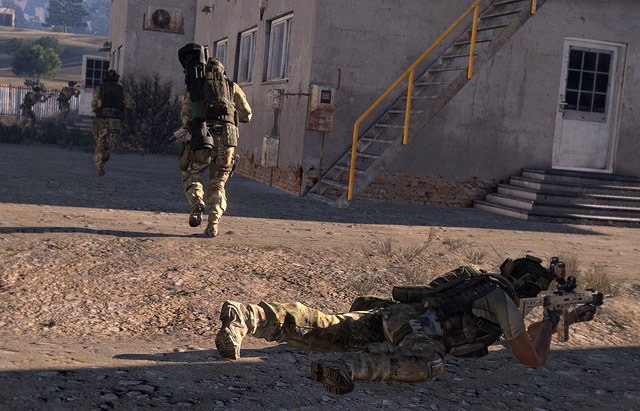 Clearing a building is one of the most dangerous tasks a team can be assigned, requiring a team-wide solid understanding of CQB tactics in order to successfully carry it out. 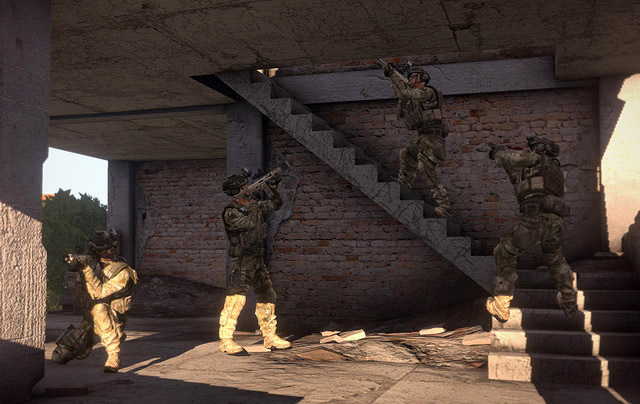 In order to effectively clear a building, an element must split itself into two parts - one is the covering team, which provides security outside of the structure. The other is the clearing team, which actually goes into the structure to clear it out room by room. The cover team is typically the Fireteam Leader and the automatic rifle/assistant pair, while the clearing team consists of the fireteam's riflemen.

The clearing team must know the plan in advance of reaching the structure’s entry point. Communications should be quiet and over the radio whenever possible, to avoid telegraphing your intentions to any potential defenders.

The cover team is responsible for:

The clearing team is responsible for:

There will be times when players must enter and clear a room or number of rooms due to the tactical situation. In order to pull this off successfully, players should be familiar with the basic room clearing procedures. 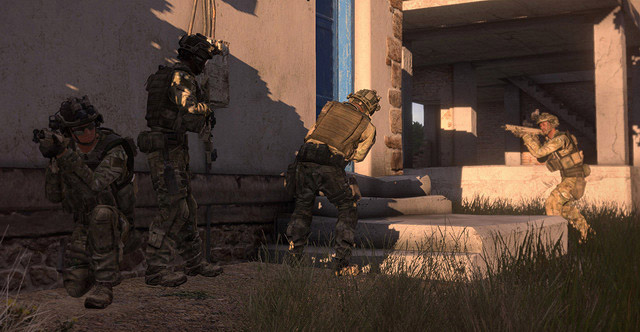 When it comes to making entry into a room, the members of the clearing team have two options.

When ordering a stack, the lead man will either say "stack left" or "stack right" - the directions are relative to facing the doorway. "Stack left" will result in the entry team being on the left side of the door.

The following is a general description of the duties of the breaching team when stacking. Keep in mind that these duties are very contextual, and the focus should be on fluidity rather than doing things exactly by the book.

One Man: The point man, will before the breach maintain security of the breach and never take his eyes or gun away from it. The One Man will initiate the breach when the rest of the breaching team is ready.

Two Man: Keeps security long before breach. If the room needs to be prepped with frags or stuns, this will be the Two Man’s duty.

Three Man: Keeps security to the side (2-4 o’clock) of the stack.

The other option is to split the stack into two, one on either side of the doorway ("split stack"). The One Man will state his entry type, and the other members of the breaching team will prepare to do a similar type of entry, except that the team in the other stack will do so from the opposite side of the door. This type of stack is best assumed when a closed door is present - moving across an open doorway for the sake of setting up a 'split stack' should never be done.

The following is a general description of the duties of the breaching team when performing a split stack. Again, keep in mind that the focus should be on fluidity rather than doing things by the book.

One Man: The point man, will before the breach maintain security of the breach and never take his eyes or gun away from it. Unless otherwise signalled, will be situated on the left hand side of the breach.

Two Man: On the opposite side of the breach, will provide cross cover into the breach

Three Man: Behind One Man, provides cover side front (approx 1 to 3 o’clock) from their perspective. If the room needs to be prepped with frag or stun grenades, this is the duty of the Three Man.

Being fluid in movement and stacking is more important than making everything look by-the-numbers. Taking the time to do a 'pretty stack’ outside of a structure can be fatal in an intense urban fight and should generally be avoided when the surrounding area is not firmly in friendly control - instead, focus on being fluid and fast. The entry team should be able to rapidly adapt to the situation at hand with a minimum of communication and spend as little time "at the door" as possible. Flow to the door, through it, and through the structure.

When the stack is set, the next step is to actually carry out an entry from start to finish. For this, the following steps act as a guideline for how a typical room take down occurs.

The entire process, from start to finish, happens in a few seconds at most. Knowing how to enter rooms properly should prepare you for the most common CQB situations you'll encounter in the game. Note that if you are using a covering team outside of the building, the clearing team should state loudly that they are "coming out" of the structure before doing so, to ensure that the covering team does not mistakenly engage them. 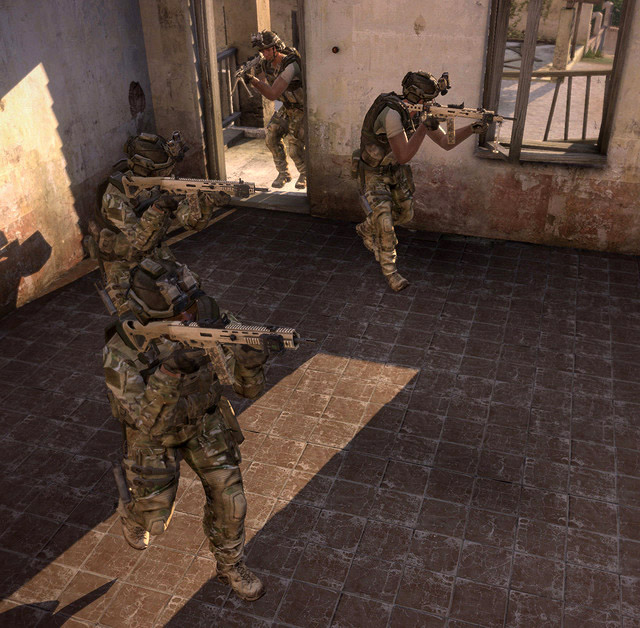 As MOUT, and particularly structure breaching, is among the most dangerous offensive procedures a soldier will go through, casualties are expected. It is however, except due to combat ineffectiveness, essential to keep up the momentum. If one loses momentum and the element of surprise, the enemy will have sufficient time to barricade themselves and prepare themselves in other ways, perhaps also counterattack. As such, it is imperative that one prioritises securing the building or compound prior to treating casualties. For personal care, this includes applying only tourniquets to bleeding wounds, waiting with proper bandaging and stitching until the compound has been secured.

When possible, one should always seek to communicate one’s actions and describe the environment to one’s buddies. This includes explaining the room layout, the characteristics of the room and its interior, enemy or civilian presence, et cetera. The more accurate information provided in concise descriptions, the better your team’s situational awareness will be. This information should be provided through proximity voice rather than through radios – only messages and callouts of priority such as the “house/compound clear” callout and casualty updates should be transmitted through the radio.

When verbal communication is undesired, such as when seeking to maximise surprise and/or when the team is seeking to remain undetected for as long as possible, there are a few non-verbal cues that can be used. The most practical of these would be the shoulder tap and the barrel dip. When used efficiently, these can reduce unnecessary communications significantly and lead to better understanding of intents. Shoulder taps should be used by the second person in a stack to signify that the stack is ready to go. On receiving this signal, the One Man (point) is cleared to push.

If the stack is divided into two stacks on either side of the door, and it is not clear who is to go in first, the deferring party may choose to dip their barrel. This achieves two things: It signals to the other stack you are not going into the room first, and it prevents you from aiming at the One Man as they breach the room. The barrel should of course be raised prior to entry and remain raised until the room has been completely cleared.

An additional non-verbal cue that can be useful in certain situations is the ACE3 hand signal for stop, which with standard key binds can be accessed by pressing CTRL + NUM2. This cue signals to the team that their movements should halt immediately. Hand gestures are most effective when people following repeat the gesture down the line.

Every team member needs to be familiar with what to do when dealing with danger areas in the urban environment. Due to the chaotic and fast-paced nature of urban combat, there are no strict roles for each fireteam member to take when crossing urban danger areas. Instead, roles are based upon where in the formation a given person is, regardless of their fireteam role.

When moving up to a street danger area, the first person in the formation will stop at the corner, scan both directions, take a knee, and then say "Set!" via direct-speaking. The second person in the formation will then move up, make his own scan, and decide on how he will move across. When he is ready, he will say "Crossing!" and then rush across the danger area. The remaining members of the fireteam will follow across at intervals of their choosing, based upon whether enemy fire was received and various other considerations. The last to cross will say "Last man!" to let the cover man know that it will be his turn to move next. The last person to cross will be the cover man, who was the first person to have reached the corner. 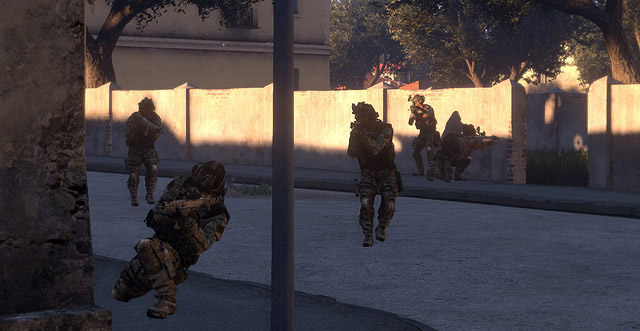 A squad works through the urban environment, covering their own movements as they go

When covering corners, if one player kneels while another stands behind them, two pairs of eyes and two rifles can cover the same area, increasing effectiveness. This is commonly known as a "high/low stack" and can be employed naturally whenever the situation allows. Note that the kneeling player must not stand unless he has cleared it with the standing player - else he's likely to stand up into a bullet. 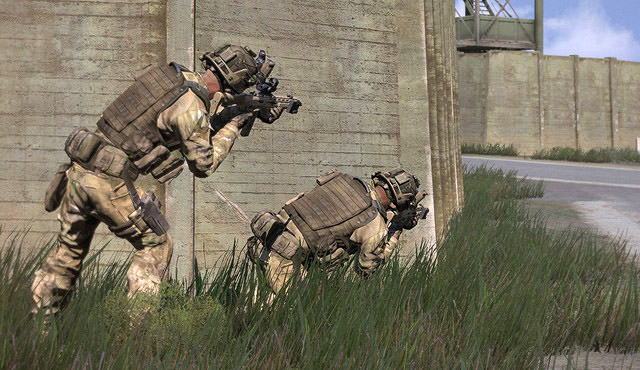