When it comes to parachuting into combat zones, there are two basic styles of parachutes used. The first is a round, static-line chute – this allows for minimal control during descent, and the deployment of the chute automatically occurs as you leave the aircraft. The second style – typically used by smaller, more highly-trained units – is a ram-air maneuverable parachute that is manually deployed by you after leaving the aircraft.

Both have their uses – when doing a large-scale static drop, the time any given paratrooper spends in the air is minimized, and the benefits of a ram-air parachute aren’t so significant. For special forces or other units that may need to land in more precise areas, the ram-air parachute gives them that capability.

For a static-line jumper, the only time they will experience true free fall is if their initial chute does not deploy. In this case, the reserve chute must be immediately triggered – whether there will be time for it to fully deploy depends on the jump altitude. Static-line jumps can happen from altitudes as low as 150 meters, at which point a reserve chute simply won’t have time to deploy. For a non-static-line jump, free fall can begin at a variety of altitudes depending on the mission requirements.

The free-fall phase is used to establish terrain orientation, check on the dispersion of other paratroopers in the drop, and close the distance to the altitude at which chute deployment has been decided on. As you fall, keep a close eye on your altimeter so that you know precisely when you should begin your chute deployment.

You will find that it’s possible to get upwards of 40kph of ground travel speed by diving forward in freefall - this can be used to move closer to your drop zone before you deploy your chute, and your in-air maneuverability also allows you to maintain formation with other jumpers in your unit.

HALO drop – High Altitude, Low Opening
Has the chute deployed at low altitude to minimize the time spent under canopy. To increase precision, a HALO jumper maneuvers his body during freefall to get as close to the desired landing site as possible before deploying his chute.  As a general rule, a HALO drop should begin to deploy chutes no later than 300 meters above ground level – it can take time for the chute to fully deploy. Depending on the anti-air threat, deploying higher may be viable as well.


HAHO drop - High Altitude, High Opening
Has the parachutists deploying their chutes at a much higher altitude.The ram-air parachutes allow for substantial ground to be covered during flight, to the point that the plane initiating the drop can be 30+ miles from the drop zone when the paratroopers exit the aircraft. In a HAHO jump, troopers exit and then deploy their chutes shortly after beginning freefall. One member of the stick becomes the guiding element, with the rest of the unit following them in a rising column formation. This leading member is responsible for navigation to the landing zone.

Both styles of insertion give you some degree of control over your descent – with static line “round chutes” having significantly less. Parafoils give you much greater maneuverability during the descent. While in flight, you’ll be able to turn, accelerate, decelerate, and flare the chute.

This high level of control allows you great flexibility to choose a landing site that works best for you and your team - as long as you’re high enough in the air, almost anything you can see can be reached by gliding to it. The Arma 3 parafoil can reach a forward speed of over 50kph, though this brings with it a more rapid descent rate. For maximum glide range, try to stay closer to 15 to 20kph - while you’ll be in the air longer, your total ground distance covered will significantly increase. As you descend, you’ll find that wind will disrupt your flight and push you off course. 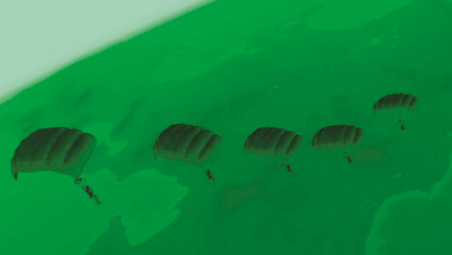 This wind drift must be accounted for and monitored, particularly in low-visibility situations such as night drops. Ensure your team is navigating and adjusting the flight path during the descent, else you’re likely to end up a significant distance from where you’d intended.

As you descend into the landing zone, you must rapidly assess the ground situation and any obstacles observed. Take care to avoid landing or passing near trees, power lines, or landing in urban areas or close to potentially occupied structures. While scanning for these obstacles, also search for signs of the enemy – bunkers, vehicles, foot patrols, or anything else that might indicate enemy presence.

Finally, scan around to see where the rest of your stick is landing – this will be key to linking up with them once on the ground. Once you’ve determined a good landing site, one which is free of obstacles but also provides some degree of concealment, maneuver your chute towards it and prepare for touchdown. For parafoils, when it comes to landing, attempt to land facing into the wind.

You will need to reduce your descent rate leading to touchdown - if you fly in at high speed, the impact alone can kill you. Instead, try to have a low forward speed, and in the few meters before touchdown, flare back. Done properly, this flaring will allow you to touch lightly to the ground - much more softly than the heavy impact a round chute would give.

Upon landing, immediately ditch your chute and harness and move for nearby cover or concealment. If neither is present, assume a low position. Scan around for threats as well as to locate the landing sites of fellow troopers. Check your gear at this point to ensure that everything you’ll want access to is readily available, and not packed away in your rucksack.

Rolling up the Stick

After landing and taking up a concealed position, the next step is a technique known as “rolling up the stick”. This is the most efficient way to get one jump group reassembled. In this process, the people who jumped first move in the direction of the jump dispersion, while those who jumped last move in the reverse of that. 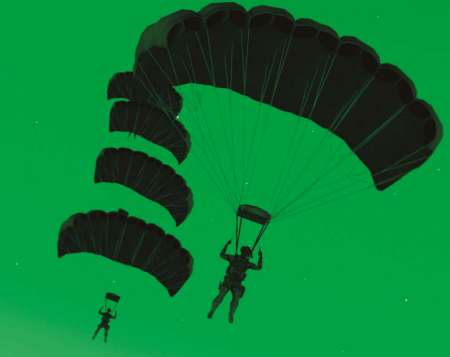 This causes the front and rear of the paratrooper distribution to move towards the center point, resulting in the full stick reassembling in short order. If there are larger-scale assembly areas defined, the next step from here is to establish leadership and make your way to the assembly area. The mission briefing for any paratrooper operation should define how long paratroopers should wait in assembly areas or wait for their stick to assemble – once this time is up, whatever force has managed to reconsolidate is what you have to work with. Once the assembly time is up or the situation makes it a necessity, the assembled paratroopers move out and begin to conduct their mission.

Note that it’s entirely possible that you will end up in another unit’s drop zone, or may have stragglers end up in your assembly area. If this happens, roll with it – paradrops are a chaotic situation and you need to maintain momentum after landing. If someone doesn’t know where their stick is – take them with you and use them as part of your force. It’s far better to be working in small teams, accomplishing objectives, than to have some people standing around wondering where their buddies are.

One way in which paratroopers can be supplied with heavier munitions is by rigging pods of gear that can be deployed along with them. These pods are typically deployed at the beginning or end of a stick, and can contain additional anti-tank weaponry, anti-aircraft launchers, mortars, mines, ammo, explosives, and more. If available, once the stick has rolled up, a search should be made for the bundles and any necessary gear should be acquired from them.