The most essential task of any paratrooper force is to find and secure designated objectives. This is accomplished by linking up with fellow paratroopers until a large enough assault force is gathered, then moving to and assaulting the nearest high-priority objective. Speed is of the essence here - the sooner after landing that an assault can be conducted, the less likely it is that the enemy will have had time to reinforce what they perceive to be the most important areas.

Once on the ground, paratroopers may or may not have access to radio communications – depending on the era, enemy situation, and so forth. In lieu of radio comms, verbal communications, hand- and light-signals, and flares or star shells can be used for signaling and communication.
The most fundamental signal is a challenge/response – in this, a paratrooper calls out a verbal challenge to an unidentified person, who must respond with the response phrase to indicate that they’re a friendly element. The most famous of these challenge/response pairs was the Flash/Thunder combination used by airborne units during the Invasion of Normandy in World War 2. It’s up to the mission commander to determine what pair of words should comprise the challenge/response, and up to the paratroopers to remember them once on the ground.
As for verbal communications – it’s expected that paratroopers will utilize stealth whenever possible, which necessitates them communicating quietly with those near them. Speaking loudly or shouting is to be avoided, as your voice can carry a long distance and alert enemies to your presence. 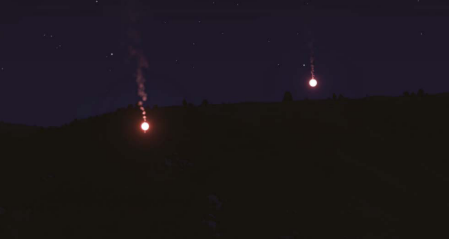 Hand signals can be used to communicate with known friendlies from a distance – most typically these will take the form of signaling other units when to move or follow, or to indicate that an objective has been secured.
Flares and star shells are employed when the need for communication is more important than the risks of detection that their employment brings. For our purposes, colored flares have special meanings – green flares indicate that any nearby straggling paratroopers should move towards that location to assemble, yellow flares indicate that an objective has been secured, while red flares are a call for assistance by a unit that is in contact with the enemy and unable to gain the upper hand by themselves. Star shells follow the same color code, but last a much shorter time and are somewhat safer to use because of this. White flares carry no special meaning and are simply used for illumination.

Once the enemy has determined that they’re being attacked by a paratrooper unit, reinforcements will be called from the surrounding countryside. In order to delay and disrupt these reinforcements, paratroops will endeavor to mine roads leading into and through the drop zone and objective area. In addition to mining, troopers can also move civilian or military vehicles into the roads, forming roadblocks and ambush points. For more on mining, see the Engineer chapter.

Ambushes are essential to stopping, delaying, or disrupting enemy reinforcements. Ambushes should be set at terrain suitable for them, with the troops manning the ambush points being well-supplied with anti-tank weapons and machineguns. Due to the limited supply of heavy weapons in general, ambushes should be economical in their usage of anti-tank weapons – if a target can be destroyed without resorting to an AT weapon, it should be.

Troop trucks and other ‘soft’ vehicles should be engaged with machinegun, rifle, and grenade fire, while only fully-armored vehicles should be struck with AT. Light AT should be saved for APCs and similar, with heavier AT being reserved for tanks and more threatening vehicles. As with guerrilla warfare, if an ambush is conducted and the ambushing troops feel that they’re not winning the fight, withdrawal and redeployment to a different area is a wise way to conserve strength.

However, this is not always possible – if defending a key objective, it may be necessary to signal for reinforcements and attempt to hold at all costs.