Pulling a trigger - or rather, clicking the mouse button - is easy. Anyone can do it. Anyone can make bang-bang noises and throw bullets downrange haphazardly. The part that matters though - the marksmanship with which those rounds are delivered - takes some knowledge, practice, and skill to hone and maintain. Basic marksmanship is a skill that we encourage all players to practice. The process starts with learning how it all works, which we'll go into now.

Once fired, a bullet follows a ballistic arc determined by gravity, air resistance, bullet design, etc. Since the muzzle sits below the sights, the weapon's barrel and sights are intentionally at slightly different angles, this in turn causes the bullet to cross the "point of aim" (where the sights are pointing) twice. The first intersection is at close range - less than 50 meters from the weapon, after which the bullet will be slightly above the point-of-aim - while the second intersection happens at what is called the "zero range", which is the range a weapon's sights are calibrated for. After that, the bullet will start to drop below the point of aim. Knowing where to expect the bullet to be at any point along the trajectory helps you to compensate via "offset aiming" for targets that are at ranges other than what your weapon was zeroed for. You can see this basic concept illustrated below.

The term "sight picture" refers to the way the front sight, crosshair, or reflex dot is oriented relative to the target being engaged. The typical sight picture you want to achieve is that of the center-of-mass hold, which is where the sight rests on the upper chest of the enemy, or the center of their visible mass. This is intended to give you the best possible chance of hitting them. If they are further away than you thought, and your bullet drops more than you were expecting, the shot should still land on their body. The same can be said for people who are closer than you realized.

With a good center-of-mass hold, you can expect to reliably hit standing targets out to 300-400 meters. The smaller the target, the more likely that you'll be forced to use the 'offset aiming' technique to score hits. This is simply the process of aiming over your target if you're shooting low, or to the side if the round is landing beside them. Offset aiming is generally required with fixed red dot optics, such as the ACO or Holosight. With ironsights, the sight distance can be adjusted. Pick a range that fits where you expect combat to most likely occur, and make this your "battlesight zero". If you begin engaging targets at longer ranges and need more precision, adjust the sights accordingly.

When working with magnified optics, many will have what is known as a Ballistic Drop Compensator ("BDC"). This is a feature of the reticle that has horizontal hashmarks descending down the central sight line - often with numbers beside them. These numbers correspond to ranges in hundreds of meters. To hit a target at a given range, simply align them with the corresponding hashmark. Most BDCs have horizontal marks that correspond to the width of a human's torso, shoulder-to-shoulder, at the given range - this helps for estimating ranges. In the below illustration, the left sight is aligned with a 600 meter target, while the right one is aligned at 400 meters. 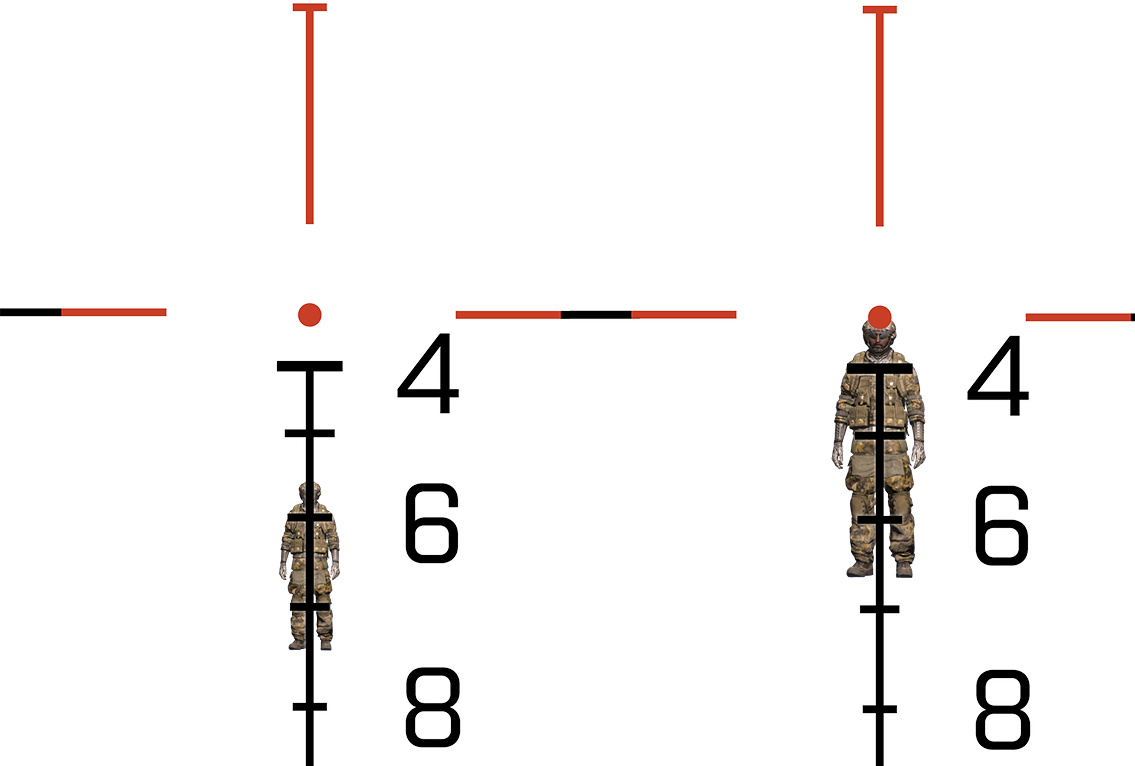 Note that an enemy's rifle or other weapon can potentially block a bullet, and absorb the damage. Also note that some enemies may be wearing body armor - if shooting them in the chest isn't stopping them, transition to head shots or pelvic shots, depending on what is available to aim at. Head shots will immediately kill, while pelvic shots will drop them to the ground, unable to run - at which point additional shots can be delivered for lethal effect.

Finally, remember that when shooting at distant targets whose range may be unknown, it's generally better to aim low and work your way up. Aiming low allows bullet impacts against the terrain to be seen, giving a visual representation of how much you need to adjust your sights or hold-over to correctly engage the target. 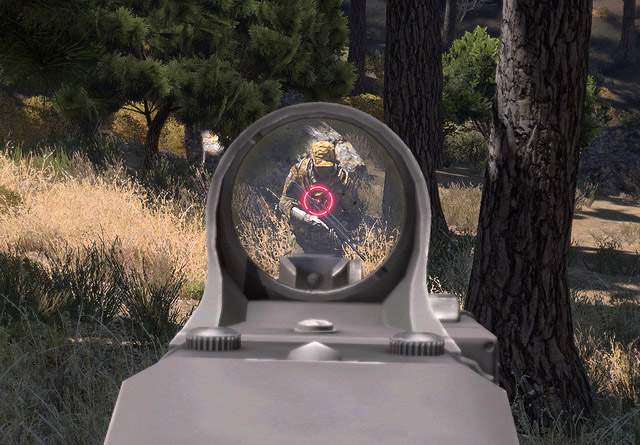 An upper-chest center-of-mass hold at close range. This is an ideal shot, and will result in a fatality - assuming the enemy's rifle doesn't block it!

One other thing to remember is that the origin of the bullet will be from the actual weapon muzzle, and not the center of the screen as in some games. Because of this, you have to keep in mind that your weapon sights are a few inches above the rifle bore. If you do not take this into account, you will occasionally find instances where you're shooting into the ground (or an obstacle) even though your sights give you the impression that you have a clear line of fire. This becomes more pronounced if you are using the backup sights on a scope. Because of the size of the scope, the backup sights will end up significantly higher above the bore than otherwise, leading to an even larger discrepancy between bore line and sight line.

Note that the Arma 3 crosshair will indicate if something is close to the bore by shifting position backwards to reflect where the bullet will strike. This is an easy way to tell if your muzzle is masked by an obstruction.

Elements of a Good Shot

Several things influence the accuracy of your fire in Arma 3. The more elements you have in your favor, the better your accuracy will be. 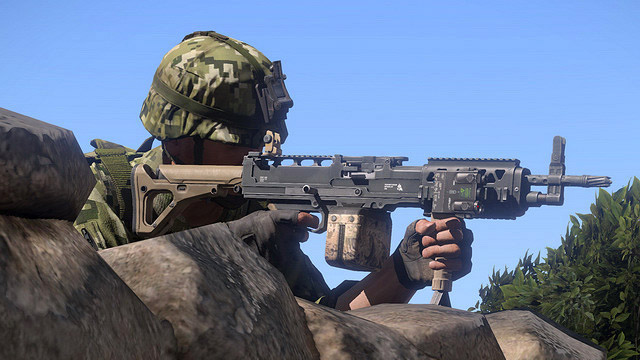 Supporting an Mk200 on a stone wall

Being able to engage a moving target at range and land hits in the first few shots is a skill that takes time to master. The payoff - being able to land shots on enemy that think they're moving too fast to be tracked - is definitely worth the effort invested in mastering the skill. The amount of lead needed to hit a moving target varies with the muzzle velocity of the weapon used, as well as the distance to the target and their movement relative to you. 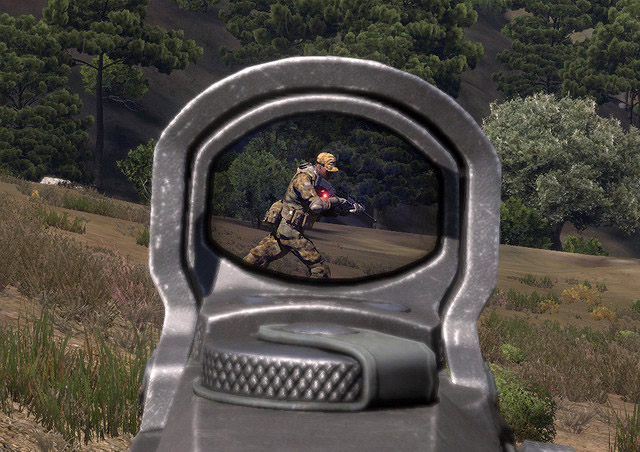 A shallow lead on a sprinting enemy at close range.

Bear in mind that targets moving at shallow angles require less lead, while those running directly towards or away from you require no lead. At ranges out to around 300 meters you typically only need to lead the target by a few body widths, depending on the speed they're moving relative to you. If a target is coming directly towards or away from you, no lead is required. If they're moving at an angle to you, less lead is required. If they're sprinting perpendicular to you, you'll need to use a great deal of lead at extended ranges, and will be best served by massing fire with other friendly units to take the enemy down.

When it comes to gunning in a vehicle (such as a helicopter door gunner), remember that you need to lead targets based upon the direction the vehicle is moving. If you have to to traverse your weapon to the left to continue to track a target, lead the target to the left. If you have to traverse right to track, lead to the right.

Terminal ballistics in Arma 3 consist of a few different aspects: Penetration, ricochets, wounding, and, in some mods secondary fragmentation. First off, Arma 3 models bullet penetration based on the caliber and speed that a bullet impacts at. Because of this, you will see heavy machineguns punching through walls easily, while rifles will have lesser penetration - and submachineguns and pistols will be weakest of all. It is important to remember that just because an enemy has ducked behind a wall, they are not necessarily safe. If you have a suitable weapon, you may be able to negate their cover through sheer firepower. Note that if a bullet passes through a structure, it will deal less damage to the structure, due to not having expended all of its energy on it.

Ricochets are another aspect of the terminal ballistics model. When a round strikes something at a suitable angle, it will have a chance of ricocheting away. These ricochets can pose a danger to anyone in their path, though they are generally less lethal than their full-speed counterparts. Note that high-explosive cannon rounds are the exception to this. When they hit, regardless of their speed, they'll explode and do great damage to anything nearby.

Finally terminal ballistics on human targets are based on where exactly the person is hit. Leg and arm shots do the least damage, while torso shots do a lot of damage, and most head shots are immediately fatal. Armor can also provide some protection if worn - vests for your torso, helmets for your head - Note that some mods introduce secondary fragmentation into the terminal ballistics model - if a bullet, cannon shell, or rocket hits a solid wall and penetrates it, it can cause fragments of the wall to project out of the far side of the wall in a cone-shaped spray, wounding anyone unfortunate enough to be in the way.

Many weapons in Arma 3 fire tracer bullets every few rounds. Tracers are bullets that use an incendiary material to make their flight visible - this helps to adjust fire at distant ranges. There are a few quick things that need to be conveyed about tracers in Arma 3: