There are several distinct types of fire that can be utilized in Arma 3. We'll cover most of them here so that everyone is familiar with the terminology and the principles behind them. The one that you will hear most frequently as an infantryman is "area fire", but the rest is also useful and good to know.

This is the most basic type of fire. In this, you see the enemy clearly enough to be able to aim at them directly and fire upon them. The effectiveness of point fire depends on the sights, accuracy, and killing power of the weapon being used. Point fire is most effectively delivered at a deliberate pace, with each shot being aimed. The tactical situation may require a more rapid engagement method, however. 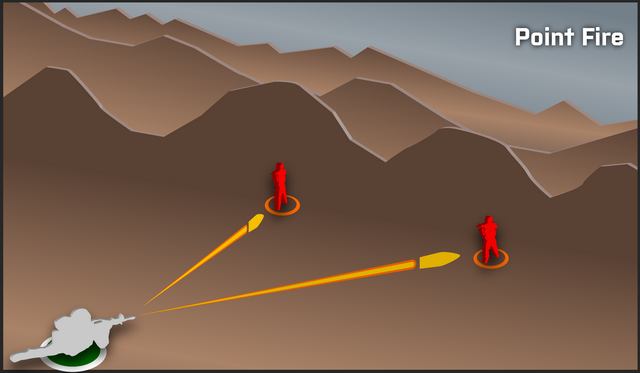 When an element is using point fire, it's typically done against a very visible target or group of targets that can be engaged with precision. An enemy squad ambushed in the open, for instance, would be an example of a situation where element-level point fire would be employed. A soft-skinned vehicle such as a transport truck would be another good example. 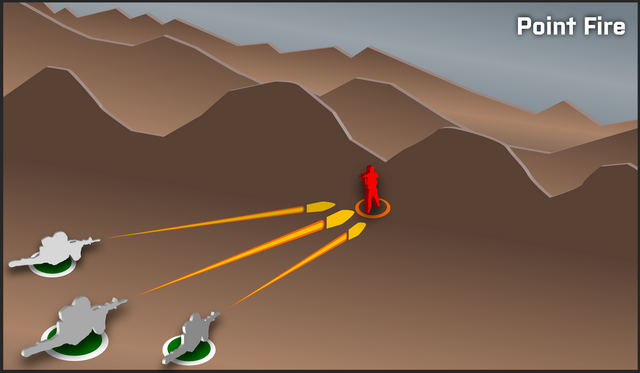 Point fire could also be used if a fireteam was trying to suppress and destroy a specific building or bunker, etc.

This technique places a volume of fire on a specific area instead of a specific individual target. It can be used to place fire on enemy units that are obscured, massed, or at such a range that point fire becomes slow and ineffective to use.

When an element is laying down area fire, each individual shooter aims at known, likely, or suspected locations of enemy soldiers - or at clusters of the enemy, in the case of using it against massed or distant targets - and sprays them with fire. The emphasis is on a concentrated, heavy volume of fire. The more bullets sent towards the enemy, the greater the chance one will hit its mark, and the more likely the enemy will become suppressed by the volume of fire.

Area fire is typically done at a faster pace than point fire, but not quite as fast or high-volume as suppression. 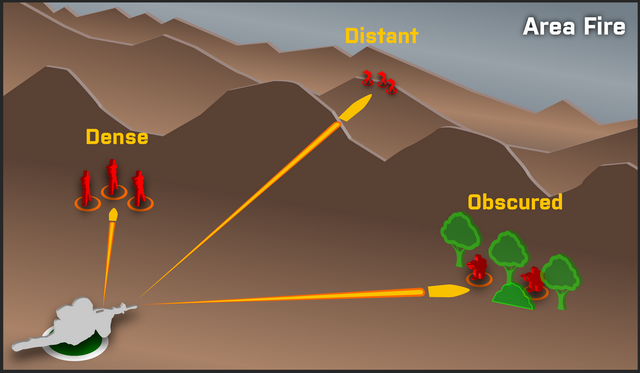 Leaders, note that area fire will not always come naturally from an element and will frequently have to be specifically called for, especially when facing an obscured target

This is the act of putting a high volume of fire on an enemy position to prevent them from being able to return effective fire.

Note that suppression is only effective if you can make the enemy believe that popping up to return fire is going to result in them being hit or killed. You don't have to actually hit them, but you must make them think that you can and might if they don't take cover. Suppression can be used to "fix" an enemy force while another element moves around to their flank to catch them in their unprotected or otherwise vulnerable side.

Suppressive fire is typically done at a very rapid rate to begin with, which achieves fire superiority. Once fire superiority has been achieved, the suppressing element can slow the pace of their fire to facilitate ammo management, provided that they aim and pace their shots in a fashion that maintains effective suppression of the enemy. 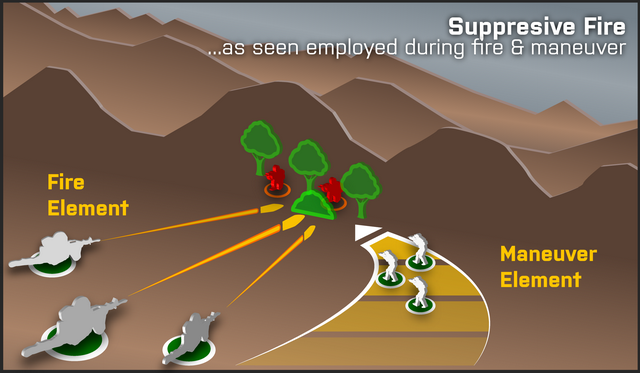 Indirect fire is simply fire that is placed on a target or location that follows a steeply arced trajectory, allowing it to be placed into areas that are out of direct view of the gunner. Indirect fire can be used to cover "dead space" that is out of view of any direct-fire assets (e.g. machineguns, rifles, etc).

At the platoon level, indirect fire typically comes from grenade-launching weapons like the Mk-32 Grenade Machinegun or the 3GL grenade launcher. Mortars and artillery are the big brothers of the 3GL and Mk32 when it comes to indirect fire.

One great aspect of indirect fire is that the enemy has a much harder time returning fire when it is employed from out of sight. That way the source is more difficult to locate, and even after location, the enemy cannot use direct-fire weapons and must rely either on their own indirect assets or movement towards the source of fire. 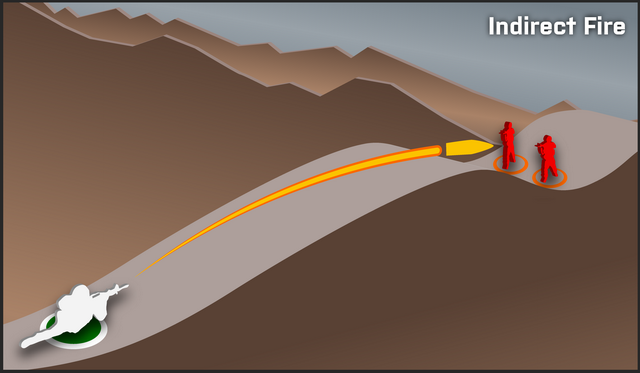 Recon by fire is where shots are placed into an area to try to flush out the enemy or get them to begin firing, thereby giving away their positions. This is used when stealth is no longer a concern. Firing into a wheat field that may be hiding enemy forces is one example of recon by fire.

Recon by fire can be used in a defensive position if one suspects that the enemy is lurking in a given nearby area. Firing into the area may cause them to think that they have been spotted, and in turn begin firing back, exposing their true positions.

Types of Fire, Relative to Targets 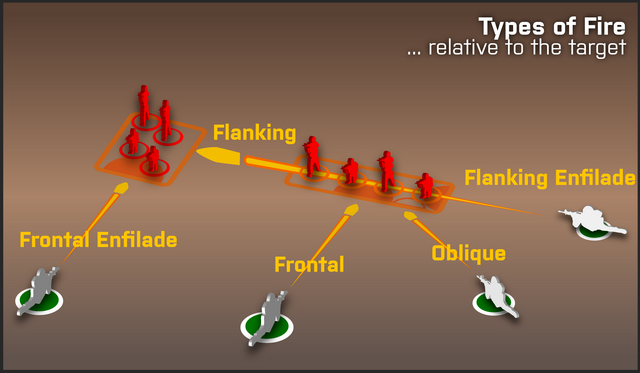 This diagram should say it all. Just to be safe, though, we'll cover it in more detail:

Flanking, oblique, and frontal fire can become enfilade fire simply based upon the orientation of the enemy formation relative to the shooter's position.

Enfilade fire is the most damaging - the gunner only has to make small adjustments to their fire to engage multiple targets, and rounds that miss one enemy may very well hit another one further back in the formation.

Dead space is defined as "an area within the range of a weapon that cannot be covered by fire due to intervening obstacles, the contour of the ground, or the trajectory of the weapon" (Close Combat Marine Workbook).

The key thing to remember about dead space is that it needs to be covered in some capacity when defending - either by indirect fire (UGL grenadiers, mortars, artillery) or the defense must be situated such that it renders the benefit of the dead space null and void (ie by ensuring that machineguns are covering the exits of a draw).

When on the attack, "dead space" becomes "defilade" - meaning that it acts as protection from enemy direct fire and observation. 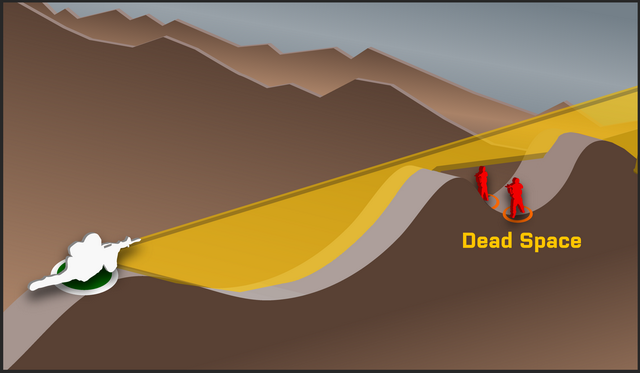