The map is extremely useful for planning and coordination purposes. One of our main methods of conveying information to other players is via using "map markers" to indicate points of interest, waypoints, objectives, landing zones, enemy positions, and more.

Below are some guidelines for making the most of the map. Heed these and things will go more smoothly for everyone.

How to Mark the Map 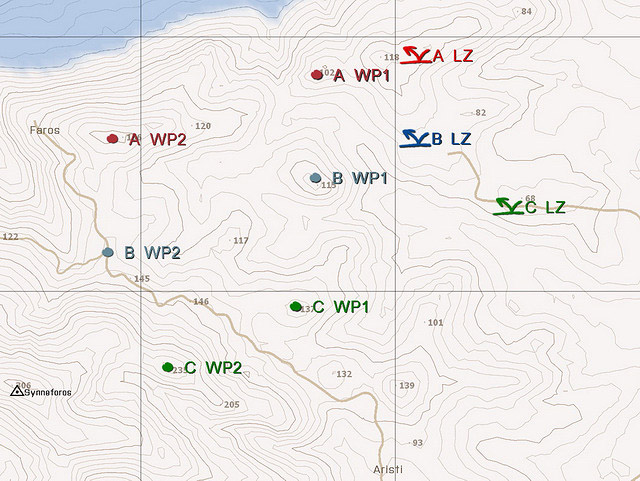 A typical map plan for a platoon helicopter insertion

Reading a map is easy once you know the basics of it. The main thing to remember is that the grids must be read right, and then up. See the following screen for an illustration of how it works. Due to the fact that the map grid is composed entirely of numbers, it's important that you do not transpose them, else you're likely to send someone far, far away from where you needed them to go. 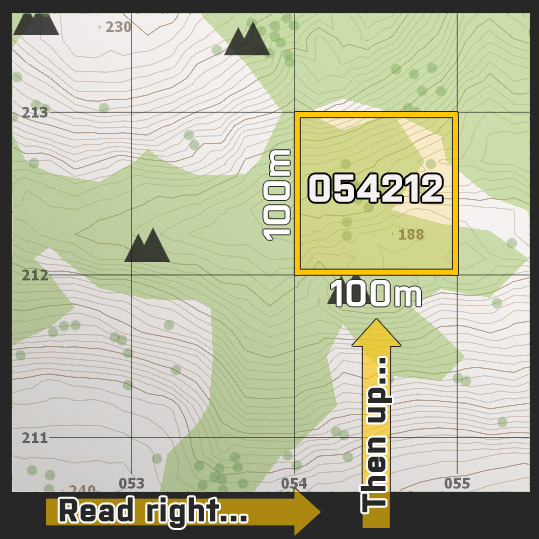 Depending on the difficulty settings and mods used, you may have a mouse-over tooltip that displays the elevation and six-digit grid of wherever your cursor is. While this is a handy tool, knowing how to read grids correctly is an essential skill to have.

Since the arma map does not have more than 3 figures the most accurate grid one can give is 100m2, but by imagining a the lines inside the 6 figure grid, we can produce a 8 figure (or even 10) figure grid reference by guessing the approximate line inside both axis. Eight figure grid references are essential for communicating fire support where accuracy within 10 meters or less is essential.

Arma 3 features a grid scale that dynamically scales based upon how zoomed in or zoomed out you are. This scale shows both a linear distance guide and a contour interval guide. The contour interval means that each contour line represents x-meters of vertical space. Thus, if there are three contour lines of difference between your position and another position, you multiply that number times the contour scale to come up with the amount of vertical difference between the positions.

Note also that the numbers scattered around the map indicate points of elevation. These occur either at the top of a protrusion (such as a hill) or the bottom of a depression (such as a valley). When communicating map locations over voice chat, numbered hills can be referred to as "Hill 123". Pay attention to whether a specific hill can be seen from zoomed-out view or if someone must zoom-in to the map for it to appear, as this can be confusing to players if not specified. If the terrain you're in is very hilly, ensure you're specific about which one you mean - oftentimes there will be multiple points of elevation with the same altitude.

You must be able  to use a compass, and communicate bearings correctly.

How to Read the Compass

The compass is graduated three ways: The first and simplest is via the cardinal North, South, East, and West directions. After that it is graduated in degrees - 0 to 359. This is the inner, larger set of numbers, and should be used when calling out specific target bearings. The final outer set of measurements are known as "Mils", and generally do not have a use aside from communicating with artillery units. In the event that you do ever use mils as a direction call, remember that the numbers need two zeros after them. The "2" marker on the outer ring is actually 200 mils, for example.

Note also that the Arma compass has illumination on it for better readability at night. Also note that the compass, like other gear items, may or may not be available based on the player loadout in a mission. Also, in Arma 3, the compass can take a moment or two to fully stabilize once it has been turned.

Remember: When calling out bearings on a radio to think about the postion of the units on that frequency. Bearings are best used via direct chat, as anyone who hears you will be able to quickly locate the target. 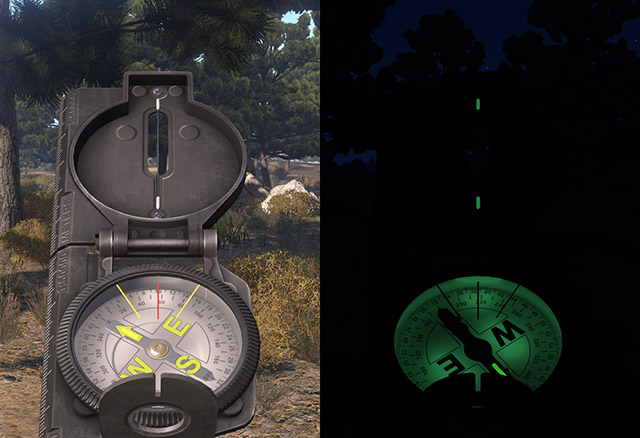 The compass, as seen in daylight and at night