Leaders load their troops and get accountability

When it comes time to board the helos, element leaders will direct their teams to the appropriate helos and get everyone loaded up. The element leaders board last, after getting accountability for their troops, and then tell the pilot that all troops are loaded. The squad leaders report to the Platoon Commander when their squads are fully loaded.

The first reason is because many helicopters have door gunners, and a good practice is to avoid crossing their line of fire. This may not come into play much during boarding at a friendly location, but it will be a large factor of hot extractions and disembarking. Get in the practice of not crossing the gunner's line of fire when embarking or disembarking from a helo. The second reason, seen in some realism mods, is so that the tail rotor does not turn you into flying chunks of meat. Being off to the right or left of the helo means that the tail rotor would have to move a great deal to strike you, which means you'd likely have enough time to get the hell out of the way before being minced. 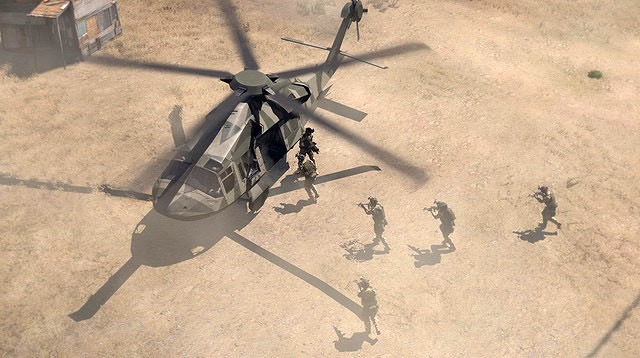 Infantry rush to a Ghosthawk that just landed

It is important to ensure that critical elements such as anti-tank, demolitions, and other mission-essential roles are spread-loaded throughout the different helos. This is done to ensure that the loss of one helo does not cripple the assault. Squad leaders are each in a different helo, and the Platoon Commander (or Company Commander) spreads his PltHQ element out through all of the helos to ensure that the PltCo, PltSgt, and Plt Medic are not all lost if their bird goes down.

Insertion at a Landing Zone 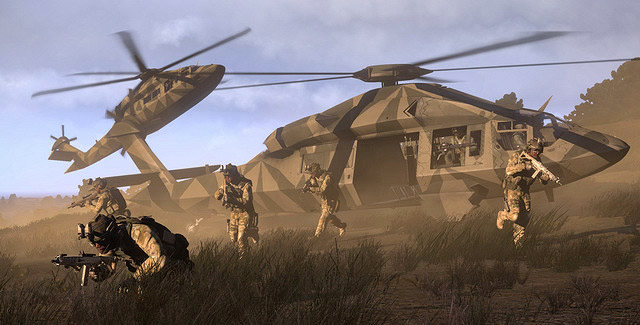 The helo comes into range of the LZ and prepares to land.
Speed and altitude drop accordingly. It is important that the pilot's approach is smooth and fast, as it minimizes the amount of time the embarked troops are in a vulnerable position.The doorgunner and crew chief scan the LZ area and suppress any contacts as necessary. The helo crew scans vigilantly to ensure that the helo is not about to set down into an ambush. If they see anything suspicious, they immediately report it to the pilot.

Helo touches down at the LZ.
Pilot announces "Go, go, go!" loudly, which the senior infantry leader on the helo repeats.
It is important to let the pilot make this announcement, since he is the one that knows whether or not the landing is complete. "Jumping the gun" and hopping out too soon can result in rather nasty falls.

Upon hearing "Go, go, go!", all infantry immediately dismount, and the door gunner and crew chief hold fire to avoid hitting any dismounting infantry. The door gunner dismounts after his fellow infantry are safely out. Note that when disembarking, every player should avoid crossing the door gunners' lines of fire if possible. Even though the door gunner and crew chief are supposed to hold their fire when troops are debarking, there may be times when they have to risk it and fire anyway. Obviously, running in front of something like an M134 can end your day in a real harsh way. To play it safe, players should do their best to avoid crossing the lines of fire of the doorgunner and crew chief. As a door gunner or crew chief, you should exercise a great deal of caution when firing in the five seconds after touchdown during which the troops are disembarking and moving out.

Senior element leader (ie: squad leader) oversees the dismounting process.
He steps away from the aircraft a few paces, takes a knee if possible, and watches the passenger section of the aircraft.

All infantry immediately head to their assigned areas. A typical squad insertion involves the Fireteams spreading out on either side of the landing zone to provide 360° security. Each fireteam moves away from the aircraft, spacing out and orienting outward to defend against any nearby threats. If hard cover and concealment is around, the infantry naturally integrate it into their movement and defensive plans.

When no troops are left on the helo, the senior element leader tells the helo pilot that ground forces are clear of the helo.
The crew chief is also observing the cargo area and will tell the pilot as well - either can be used as the signal for lifting off.

The helo takes off. Upon hearing that ground forces are clear, the crew chief resumes firing suppression of any enemy forces around the LZ. The pilot then begins his post-insertion mission, which oftentimes is that of aerial reconnaissance and support. 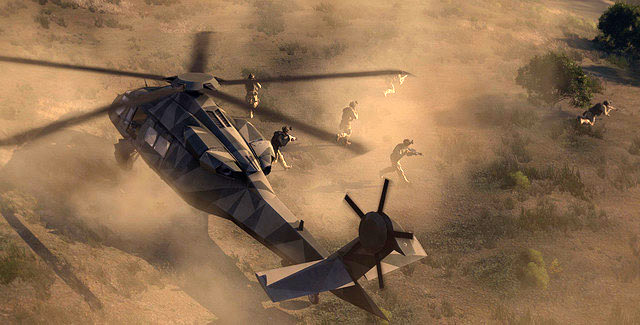 Troops leaving a Ghosthawk in the LZ

Getting troops on the ground is only part of the problem. Oftentimes they will need to be extracted as well - sometimes from a clear LZ and sometimes from the midst of a heated firefight.

Helo extractions can take several forms. At the highest level you have a full multi-squad extraction of all friendly elements that requires several helos to achieve. At a lower level you may see an extraction of something like a scout/sniper team, forward observer, or other small element. The main point for the infantry on the ground is to do everything they can to minimize the risk of the helo being shot down when it comes in to make a landing. This requires good choices of landing zones, posting security, good lanes of fire and observation, and good communication and coordination with the helo. 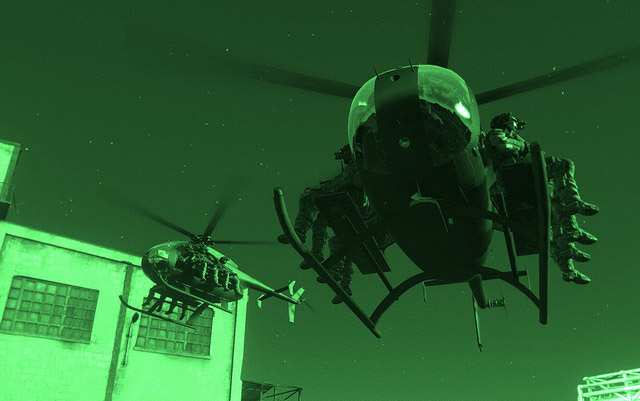 Procedure for Calling an Extract

First, give a heads-up to the pilot along with a general area he should start to head for.

This allows the aircraft to be making progress towards the area before the specific LZ has been decided on. Identify a good extraction area and mark an LZ on the map. Oftentimes the tactical situation will require you to choose an LZ that is difficult to observe and fire into. Forcing the infantry to run a bit further, provided that it reduces the chance that the helo will be shot down, is an acceptable side effect.

Communicate the LZ position to the extract helo(s).

Use clear and concise language and ensure that you tell the helo about the situation at the LZ - specifically, mention any expected threats, whether the LZ is hot or cold, the terrain, and the intent in choosing it. For example - if you picked an LZ on a specific side of a hill, make sure that the pilot(s) know that you did so because you expect an enemy threat to exist on the other sides of the hill. Move to and secure the landing zone. Clear the area of hostiles and think about where enemies could position themselves that would be a threat to the incoming helicopters.

Guide the helo in verbally and visually and deploy smoke if available to help it on final approach.
The senior element leader on the ground will communicate with the pilot to ensure that he is coming to the correct LZ. If operating in visually cluttered terrain, smoke can be deployed to help reduce the amount of time it takes for the pilot to locate the LZ. The senior leader on the ground will talk to the helicopter pilot until he has touched down, giving him feedback on where he is landing, where friendly troops are, where the enemy is expected to be, and correcting him as necessary.

Board rapidly and get out of there.
Once the helo is on the ground, security elements are called in and board the helicopter. The process of boarding must be done very rapidly, with each team leader guiding his teammates to the helicopter as quickly as possible. The last person in should be the overall element leader, who is accountable for his troops. Once they're in, he boards the aircraft and loudly states "We're in, go, go, go!", at which point the helo takes off and the crew chief and door gunner, if available, fire heavy suppression to cover the aircraft as it gains speed and altitude.