Large-scale minefields are not frequently encountered but when they are, they can be devastating if not properly approached.

The first sign that a minefield has been encountered is typically a vehicle having its track blown off or possibly being outright destroyed, or a sudden explosion blasting down nearby infantry. 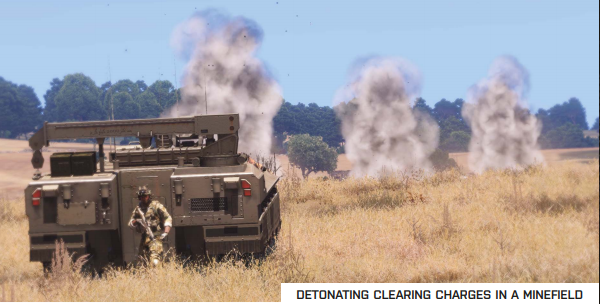 If a vehicle has been disabled by a mine

The crew will abandon it and head out of the minefield on foot. If an infantryman has been wounded, he applies first-aid to himself and waits for an engineer to be brought up to sweep a safe path to him. If the minefield must be breached, engineers will need to sweep a lane to locate and disable all the mines and allow friendly passage.

The engineers should focus on clearing a lane through the minefield that is about one and a half to two times as wide as the vehicles that will be passing through it, or several meters across for the purposes of infantry movement. Trying to clear the entire field takes too many people and too much time to be practical in most situations. While clearing, follow-on engineers will - if available - place markers on the edges of the cleared lane to help give a visual reference for safe passage. During the lane clearing operation, all available vehicles and infantry will provide overwatch on the engineers. They will suppress or destroy any threats that emerge. Smoke should be employed to mask the clearing operation when feasible, and the engineers may need to crawl to clear their lane if enemy fire is heavy enough.

Note that if an engineer becomes a casualty due to enemy fire or explosives, a supporting infantryman will move in to pull him out, get him to cover or concealment, and administer first aid or call for a medic. The engineers will ignore their own wounded and dead and leave their evacuation and treatment to the supporting infantry.

Once a lane has been cleared by engineers, a single engineer will act as a “ground guide” that the vehicles will follow through the lane. This acts as a final set of eyes on the ground, scanning for any left over mines, as well as giving the armored vehicles (which may have limited visibility) a clear reference to follow through the safe lane.