In UNITAF, demolitions and breaching fall under the roles of engineers, such as a combat or support engineer - they carry something like a claymore mine, satchel charge, or anti-tank mine. They are extremely valuable in the defense and are also the key to enacting brutal and deadly ambushes. In the offense, they are a critical part of cracking enemy obstacles and defenses with their satchel and breaching charges. For our purposes we’ve centralized the demolition information to this Engineer chapter, though it behooves other specialists to be familiar with demolition as well.
Demolition comes in several forms, with many different uses. The basic types are as follows: 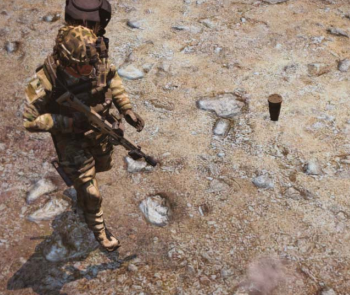 For mines, try to place them where the road dips so that they cannot be seen before it is too late. If you can’t find a dip, place them on the road where a tree shadow overlaps them. This makes them significantly harder to spot. For blast-radius explosives like satchel charges, or directional explosives like claymore mines, you have more freedom in where you position them. Place them alongside roads in brush or tree concealment, or place them in bushes, behind logs, etc. Placing satchel charges inside of buildings that are likely to be investigated or cleared by enemy forces can also work well. Anti-tank and anti-personnel mines will generally be buried when emplaced - whereas items like satchel charges will sit on the surface.

Know how the grass concealment feature works, and take advantage of it.

Grass concealment is a method by which areas that are outside of the “grass clutter” range are made to offer visual concealment to simulate the presence of grass. This is accomplished with a semi-porous grass-textured layer that is raised about six to twelve inches off the ground. This layer obscures most everything that is beneath it. It is highly effective at concealing satchel charges and other non-buried explosives and contributes a great deal towards making them difficult to detect. Minefields constructed in grassy areas are extremely difficult to detect. Lone vehicles will be helpless - the only reliable way to get through a grassy minefield is with engineers using their minesweepers to clear the way. In a pinch, infantry scouts can move ahead of the vehicles to attempt to visually sweep for mines, but it is a much more dangerous technique than using trained engineers with the proper equipment. An untrained scout has a high chance of missing mines, and it only takes one missed mine to destroy a vehicle or kill several infantrymen.

Obstacles can be used to guide the enemy into mines or other demolitions.

For instance, placing a wrecked vehicle in the middle of a road may cause the enemy to drive around it due to them thinking it conceals an IED or satchel charge. To take advantage of this, place mines in the grass on either side of the road, so that a detouring vehicle runs into them. 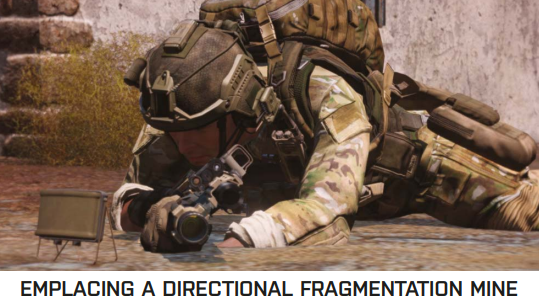 There are two methods - command-detonation and time delay. When using command detonation, you must be within a few hundred meters of the device or you will lose the option to set them off. Time delays are set with 1 second increments. You can increase the time to whatever you want, and as long as you are within transmitter range, you will be able to command-detonate if required. Note that satchel charges set for long delays can be used by a small force against a larger one as a diversion.

Be creative and try to catch the enemy off-guard with your placement and method of detonation.

If the enemy never sees it or has no reason to expect it, you’re far more likely to kill them with your demolitions.

When using tripwires, think about how the enemy will move through a given area.

Place the tripwires in areas that are likely to have high foot traffic. Placing proximity-oriented mines in locations where the enemy is likely to take cover (such as a cluster of trees) can be an effective tactic as well. Get inside the enemy’s mind and think of what they will do, and place your traps accordingly.

FIRE IN THE HOLE!

If you’re setting off demolitions and friendly forces are near, ensure that you announce it and clear the area before triggering your explosives. An easy way to do this is to announce what you’re going to be blowing up, tell people to get clear, and then repeat “Fire in the hole” three times before triggering the detonation. For example:

If at any point you hear someone shout any variation of “Wait!”, “Abort!”, “Hold!”, or “Oh noooo!”, cease the countdown and proceed to once again check that everyone is clear of the danger area.