Sitting back and firing at the enemy can only accomplish so much. To take and hold ground requires that the infantry moves to it and decisively engages and drives out or kills any enemy occupiers. To accomplish this, the assaulting infantry must be covered by friendly troops who are able to put effective fires on the enemy while they maneuver towards the objective. There is no quote that I've ever found that sums this concept up better than the following one.

The main point of isolating the enemy is that you want to ensure that the enemy is cut off from reinforcements or escape. Isolation should be done to the best degree possible, but due to various combat considerations it may not always be completely feasible to fully isolate an objective.

Isolating an objective can be accomplished in a number of ways. A great deal of it depends upon the forces available, enemy strength, and the terrain being fought in. Proper recon goes a long way towards getting effective isolation established, as it allows you to discover the enemy dispositions before shots have been fired.

Emplace heavier weapons where they can cover likely retreat paths. Plot artillery, if available, to cover likely avenues of escape or potential fall-back positions that the enemy might move to after coming under attack. Priority for artillery goes first to pounding the enemy position directly, so simply plot these as secondary targets and call them if needed.

In general, the attacking force will do the best it can to isolate the enemy position. Remember that leaving a gap that the enemy thinks they can escape from can be a very effective tactic - once pressure has been applied, they may break and run, at which point they can be cut to ribbons due to having already occupied their escape route with friendly elements without them knowing. Be aware that some enemy forces are not interested in falling back - they're there until the bitter end. Knowing whether you're facing off against troops that are not willing to retreat can go a long way towards shaping the planning process.

Preparation is basically the act of blowing the hell out of the enemy to the best of your ability before ever starting the assault. "Prepping" the objective is done via all manner of fires and whenever possible focused on high-value targets identified through recon.

Preparation can be done via artillery fire, close air support strikes, or crew-served weapons like the Mk-19. Mortar squads, if available, can be very effective in this role due to their proximity to the infantry they're supporting.

When possible, preparatory fires should be maintained during the assault element's movement. They should shift just before the assault elements arrive at the objective, so that the enemy has little time to recover from the artillery and the shock and confusion effects of it are maximized. We have seen in the past (in OFP as well as Arma and Arma 2) that this is extremely important - one assault of note was broken due to the enemy relaxing their mortar fire for just long enough that the defenders were able to reorganize into a hasty defense and take the assault teams under fire while they were still crossing dangerous ground.

There will be times when it will be more important to attack with surprise than to spend time preparing the objective with fire. Attacking suddenly, with violence and speed of action, and with surprise on your side, can be a force multiplier that can outweigh any effects that might otherwise be achieved by preparation of the objective with fires. The call is ultimately up to the commander ordering the assault - typically the Platoon Commander.

In consideration of the combat truism that "No plan survives first contact with the enemy", it's important that an attacking force remains flexible. The situation may develop in any number of unexpected fashions, requiring that all leaders are able to shift gears mid-attack in order to respond to unexpected developments or take advantage of sudden weaknesses in the enemy.

"Semper Gumby", as they say. 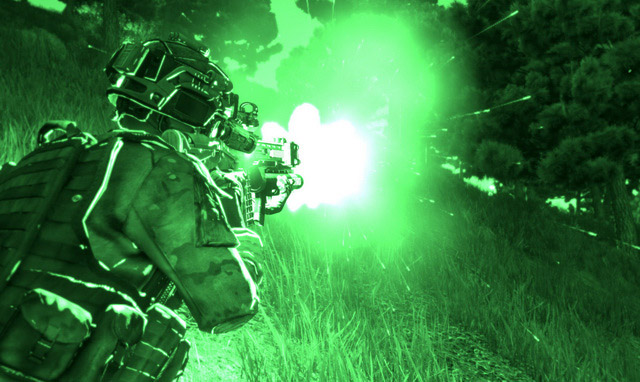 To conduct a successful attack, it is necessary for leaders to 'read' the terrain and use it to construct a solid attack plan that takes into consideration the important tactical aspects of said terrain. To do this, one utilizes the OCOKA acronym let's go ahead and take a look at OCOKA and how some of the considerations relate to the conduct of a successful attack.

Bear in mind that those are not the only things one must consider, but are instead the most common considerations. OCOKA is a great mnemonic to learn and use, and the proper consideration of the various elements of it can mean the difference between a successful attack and a defeat.

Elements of an Attack

Moving on, we'll look at the elements involved in the average attack. Attacks have three elements to them when employed at the platoon level or higher - the assault, support, and security elements - while a squad attack only has assault and support elements. Let's take a look at what the responsibilities of each are in further detail.

The assault element is composed of the forces that will be closing with and destroying the enemy by fire and movement. They advance under the covering fire of the support element as far as they can as quickly as possible, then when within effective range of the enemy fire they begin to move via bounds and individual rushes towards and ultimately into the enemy position.

The support element should be prepared to cease or shift fires once the assault teams have closed on the objective to ensure that they do not have a friendly-fire incident.

A security element provides local security for forces during a platoon-level or higher assault. This typically means that they are focused on preventing exterior enemy forces from disrupting the conduct of the assault on an enemy position. The security element is the first line of observation for and defense against any spoiling attacks the enemy may attempt. Security elements can also be merged in with the support element as part of the base of fire.

A frontal attack is done against the weakest position that can be located on an enemy's front, taking advantage of all of the terrain, cover, and concealment that can be found, and creating artificial concealment via artillery fires, smoke, etc when possible. The success of a frontal attack depends entirely upon how effectively the enemy can be suppressed. A combination of well-placed smoke and heavy machinegun fire can turn a suicidal assault into something that actually has a chance of being successful, whereas the lack of such support will leave the assault teams torn to shreds and bleeding their lives out before they've even reached the enemy.

Frontal attacks are usually done because there is neither the time, ability, or practicality of pulling off a more elaborate attack. Frontal attacks can be costly in virtual lives and are best avoided unless the situation can be made to greatly favor the attacking force. This can be done via good support-by-fire (SBF) positions, effective usage of smoke, and good individual movement techniques with suitable cover and concealment on the approach route.

When possible, a frontal attack should be pulled off with as much surprise and/or fire support as can be mustered. Every potential force multiplier must be brought into play to increase the odds of success. Bounding overwatch is essential when making a frontal attack, as it allows one element of the assault force to always be advancing while another is always providing covering fire in addition to the fires provided by the actual support element.

The single envelopment is where the base-of-fire element suppresses the enemy while the assault element moves around to a vulnerable flank and attacks. As with any multi-element coordinated attack, the support element (aka base-of-fire) should be prepared to shift or cease fire to avoid inflicting friendly casualties once the assault element is on the objective. It is important that the assault element attempts to maneuver in a way that masks it from observation for as long as possible. Shock and surprise are large force multipliers and will greatly enhance the effectiveness of any attack. 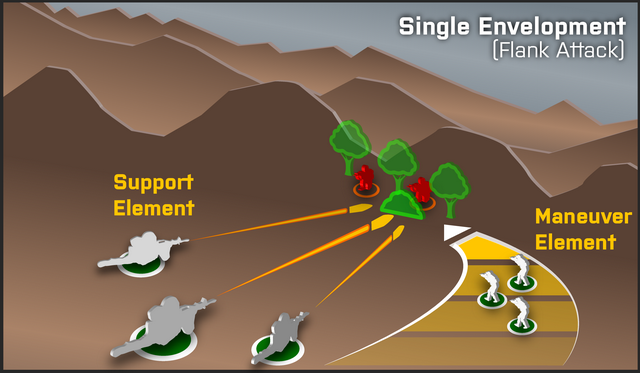 A double envelopment (also known as a 'pincer') attacks both flanks of the enemy at once while hammering the enemy with the support element's fires. This can be a very effective form of attack, as long as the assault elements are aware of the risk of friendly fire and refrain from using indiscriminate ordnance on the objective (for instance, throwing frags in the direction of the opposite assault element is a bad idea).

Bear in mind that the timing of the two elements striking the enemy can have a large influence on their reaction. If both flanks are attacked simultaneously, the enemy will be thrown into confusion. If one flank is attacked first, the enemy may shift to defend it, leaving the other flank more vulnerable but increasing the risk to that initial assault element. 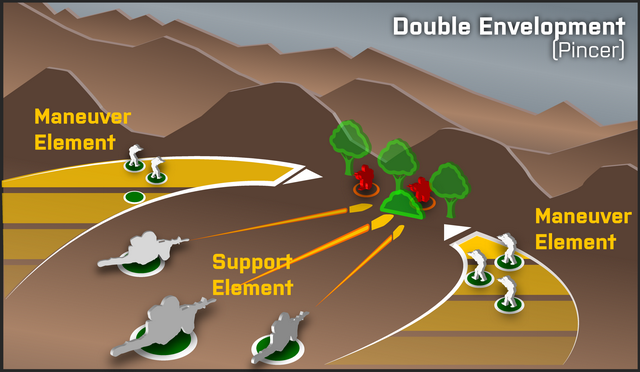 A deep envelopment is done when the situation and enemy disposition makes it possible for an element to pass by the enemy's flank security and strike them from behind. This sort of attack effectively splits the enemy's attention between two completely opposite directions.

The main consideration when utilizing this tactic is that careful coordination is maintained between the two primary elements. If this coordination is not established and kept, friendly fire incidents will inevitably occur as the two elements begin to work their ways through opposite sides of the enemy position. If the numbers are present to support it, the deep envelopment can be one of the most effective attack types. However, if the numbers are not available, it is better to stick to a more shallow envelopment, since the support element can cover the maneuver element more effectively that way, and the two elements are not cut off from each other entirely.

Note also that a deep envelopment is best done by flanking the enemy on only one side. Trying to split the assault element into two elements to send them around opposite sides to link up behind the enemy is asking for trouble. 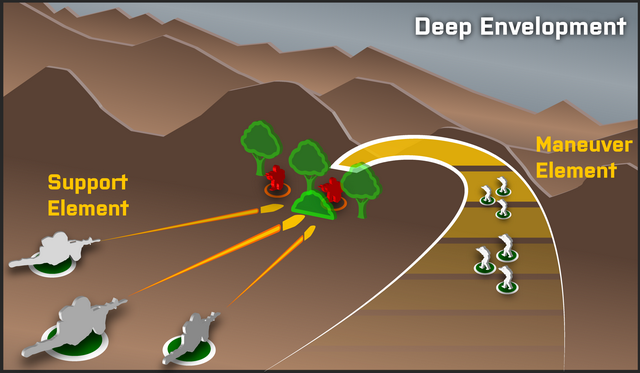