The idea behind a "battle drill" is that it is a standardized way to react to a common battlefield event.

Battle drills ensure that everyone is on the same page of music, so to speak, and allows for a rapid reaction to an event with the minimum of orders needing to be issued. The following battle drills cover the most common combat events to be encountered in Arma, and are the foundations on which additional tactics are built. While they are fully explained in detail below, we try where possible to condense such information into the bare-bones, to which you can find all battle drills condensed in the image below.

The 7 battle drills are as follows; 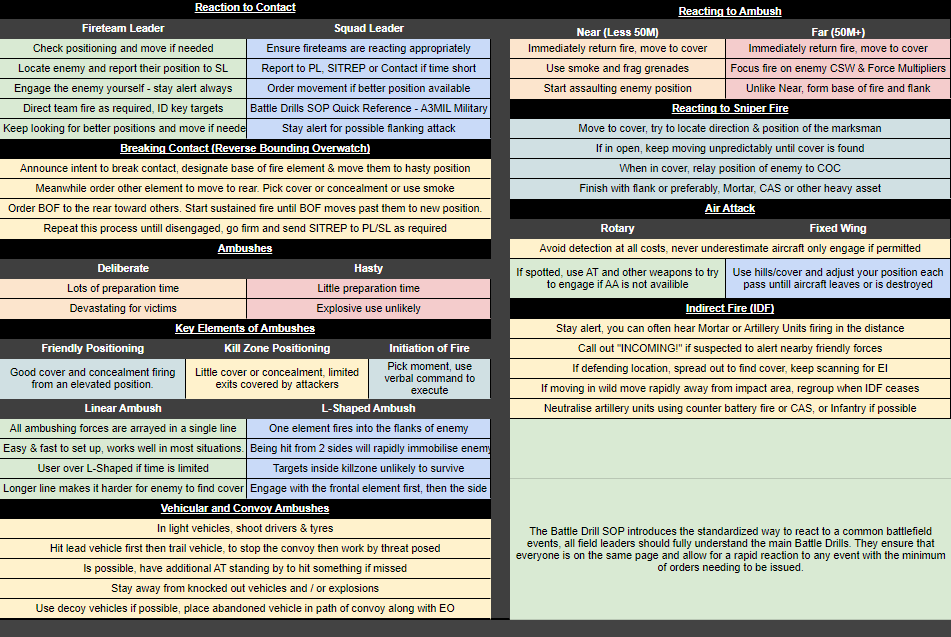 The most fundamental battle drill is reacting to enemy fire. It forms the basis for many of the other tactics covered in this guide, and these guidelines should be kept in mind when reading about them and applied as necessary. I've broken them down based on leadership level.

Breaking contact is the means by which an element disengages from a confrontation with an enemy force in an orderly fashion. Fire & maneuver tactics are used to ensure that a steady volume of fire is put on the enemy location(s) during the withdrawal. This helps to keep the enemy's head down and prevents them from keeping friendly forces decisively engaged. Breaking contact is basically an assault done in reverse.

The primary method of breaking contact is via bounding overwatch, to execute a "Break Contact via Bounding Overwatch" drill, the following steps are taken:

An ambush is a surprise attack by fire from concealed positions on a moving or temporarily halted enemy unit. It combines the advantages and characteristics of the offense with those of the defense. Ambushes are an extremely favorable way to engage the enemy. The combination of surprise and fierce, accurate fire can rip an enemy element to pieces before they have time to react. There are three main types of ambushes for our purposes - the deliberate one, in which you know that an enemy force is going to be moving through a given area, the hasty one, in which we unexpectedly have an opportunity to ambush an enemy force that has not detected us, and the delaying or guerrilla one, in which we are attempting to strike the enemy, cause casualties and confusion, and then withdraw before they can retaliate.

Key Elements of an Ambush

The key elements of any ambush are friendly positioning, location of the kill zone, and proper initiation of fires.

Players must also consider the use of explosives devices like satchel charges and claymore mines. These are usually not practical for a hasty ambush, but a vehicle ambush or deliberate ambush can benefit greatly from their usage. Triggering explosives to start an ambush is very effective, as it adds an extra layer of shock and confusion to the situation for the enemy.

A linear ambush is the most basic type. In it, all ambushing forces are arrayed in a single line. This type of ambush is easy to set up in a hurry and works well in most situations. Many hasty ambushes end up as linear ambushes due to lack of time and mobility to get an L-shaped ambush enacted. Note that the longer the line is, the harder it is for the enemy to find cover or concealment - features that may conceal him from one end of the line may not have an effect due to a member on the other end being able to still see him. Note also that the ambushing team should not be spread so thin that the ambushees are able to assault into the ambush and drive a wedge through the line. 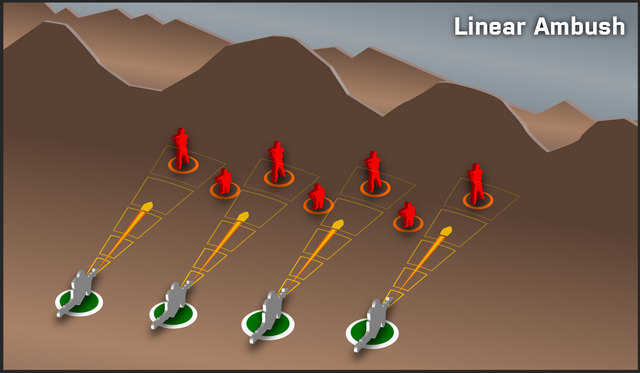 An L-shaped ambush is a bit more complex to pull off, but the extra effort is rewarded by markedly increased effectiveness. An L-shaped ambush requires that one element be positioned at a right-angle to the rest of the ambush. When the ambush is initiated, one of the two elements will find itself firing into the flanks of the enemy, while the other element will be firing into its front. Being hit from two sides like this will rapidly attrit the enemy and make it almost impossible for them to survive. A well-conducted L-shaped ambush is near certain death for those trapped in the kill zone.

L-Shaped ambushes can be done with any composition of forces. Even a single infantryman who is off to the side of the enemy when they come under fire from the front can have a dramatic effect. Initiating fires from the front while a sniper or designated marksman lurks quietly off to the enemy's flank can be highly effective - the enemy will find cover or concealment that protects them from the front, leaving their flanks open to the sniper or designated marksman who can then pick them off at will. 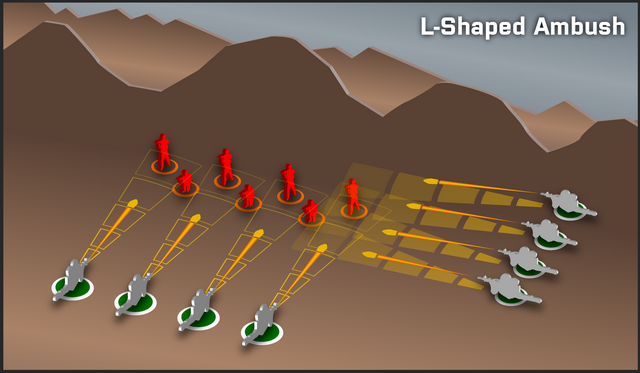 Vehicle/convoy ambushes are similar to infantry ambushes, with the main difference being that the vehicles are able to exit the kill zone rapidly if nothing is done to stop them, and armored vehicles can quickly turn the tides by attacking into the ambush if they are not rapidly dealt with.

An ambush typically is a more coordinated enemy effort than your average "meeting engagement" firefight. The 'kill zone' (where the enemy focuses their fires) is under heavy, concentrated fire, and those within it have to rapidly react to the situation if they hope to survive. The reaction to an ambush depends on whether it is a 'near' or 'far' ambush. Both will be described below. The guidelines above for a general "Reaction to Contact" should be kept in mind as well.

A 'near ambush' is defined as an ambush occurring with the enemy within grenade-throwing distance.

When an element is subjected to a 'near ambush', the action required varies depending on whether any given player is in the "kill zone" or outside of it.

If you are not in the kill zone, your job becomes one of support. Identify and engage the enemy with as much firepower as you can bring to bear, as quickly as possible. When the "kill zone" element assaults into the ambush, shift or cease fire to avoid friendly fire.

A 'far ambush', on the other hand, is any ambush in which the enemy is further than 50 meters away.

Again, the action of each individual varies depending on their location within or outside of the "kill zone".

In a far ambush, the ambushed element does not attempt to assault through the ambush. Instead, they form a base of fire while the elements not in the kill zone maneuver against the ambushing enemy force. Once the maneuvering team begins to assault the enemy ambush team, the base of fire team should shift or cease fire to avoid friendly casualties. If you are not in the kill zone, your job is to flank and knock out the enemy ambush element. You should move with your element via covered/concealed routes when possible and try to work your way onto a vulnerable enemy flank. Ensure that you notify the base-of-fire element when you begin the close assault on the enemy to avoid friendly-fire.

If an element receives sniper fire during a mission, the reaction to it will depend upon the assets available, the terrain, and the overall mission.

The effectiveness of a sniper is inversely proportional to how knowledgeable players are in counter-sniper and reaction-to-sniper drills. A 'green' group can find themselves pinned down by one, whereas an experienced group will be able to utilize proper movement techniques, smoke, and organic and non-organic assets to find, fix & suppress, and ultimately kill or bypass the sniper.

The basic things to keep in mind when dealing with snipers are as follows:

Tips for Dealing with Snipers 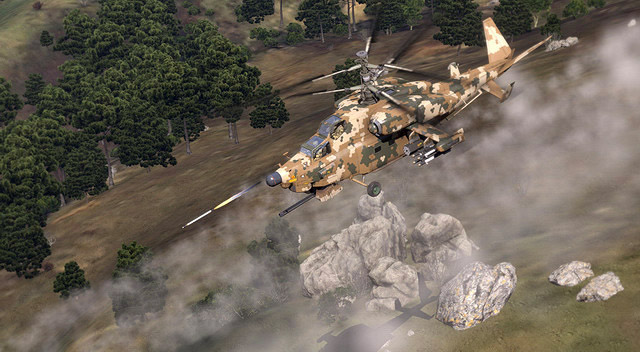 Coming under air attack as an infantry force is a serious issue, compounded more so if your unit does not have any organic air defense assets. You must know how to avoid being spotted by an enemy air asset, and if spotted, how to react.

Helicopters are the most dangerous CAS aircraft in most situations.
Their ability to loiter over the battlefield and deliver precision anti-tank, cannon, and rocket fire makes them a threat that should never be underestimated.

If helicopters are a known threat, all efforts should be made to avoid detection by them. This is done primarily via intelligent movement routes and techniques which prevent the enemy helo from being able to visually acquire friendly elements. Stay low, stay concealed, and move via concealed routes whenever possible.

If anti-air defense is organic to friendly forces, a sharp eye and ear must be kept for the approach of enemy helicopters. With proper warning, a helo can be brought down by MANPAD missiles before it knows what is happening.

If anti-air defense is not available to friendly forces, the best method is to avoid detection entirely.

The only other defenses infantry have is via the massing of fires from machineguns, rifles, and anti-tank rockets or missiles.

Helicopters that are oblivious to infantry presence and believe themselves to be safe will occasionally go low and slow enough to be accurately engaged by anti-tank rockets. If the opportunity presents itself, it should be taken, but ONLY if the anti-tank gunner is >90% positive he will successfully make the shot. 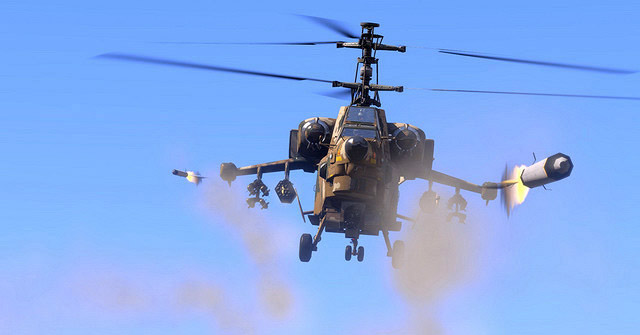 The main thing to remember when being attacked by jets is that movement perpendicular to the line of attack works best. This is especially true if they are strafing you with cannon fire or attacking with rockets. Another good thing to do is get on the reverse slope of a hill, and whenever the aircraft makes a pass, adjust your position so that you're once again on the far side of the hill relative to it.

The primary weakness of jet attack aircraft is the difficulty they have in picking out infantry at the speeds they fly. Thus, cover and concealment have a pronounced effect against them compared to rotary-wing aircraft. Unfortunately for infantry, jets tend to have extremely powerful weapons with wide areas of effect. The best defense is simply to not draw their wrath in the first place.

There are a few basic tips for how to act when coming under artillery attack or other indirect fire.

Enemy artillery can be taken out by counter-battery fire or close air support, if available, while mortar positions (which are usually much closer) can sometimes be assaulted and captured by ground attack. Triangulation can be used to figure out the enemy positions - if two squads are separated by a good distance and can hear the firing artillery, compass bearings can be taken by each unit and then compared to get a fix on the likely location of the artillery. Bear in mind that artillery units will often use a technique where they fire a barrage, wait, then fire another barrage. The idea is to make the unit being attacked think that the artillery is over, move out from cover, and begin tending to wounded or resuming movement, only to be struck again while exposed. 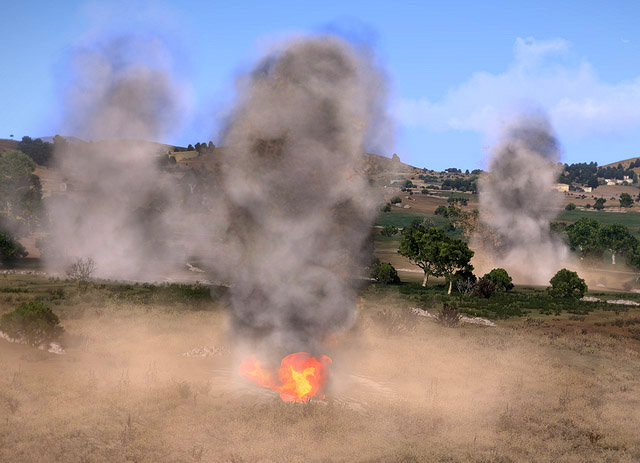