Defending can take many forms. An element may be tasked with protecting something important, such as a building, key road or intersection, vehicle, or high-value personnel. It may also simply need to protect itself while in a static position. A defense can be hasty, with units rapidly taking positions in an unprepared area, or deliberate, in which special defensive obstacles, bunkers, sandbag walls, etc, can be deployed in advance of any attack.

Whatever the case may be, there are several common themes to defending successfully.

When given an area to defend, it is up to the leaders as well as individual players to pick positions to fight from that make them hard targets. This is accomplished by taking advantage of every aspect of natural and artificial cover and concealment, as well as deploying obstacles and defensive structures to enhance and otherwise augment the existing terrain. Every fighting position should be chosen to minimize exposure to enemy observation and fires, while maximizing the lethality of the player fighting from that position.

Many defensive missions will give the defending force some flexibility in where they deploy themselves, making this a very important consideration for leaders. An area as small as 400 meters in diameter may have potential defensive emplacements that range from "Great" to "Utterly dismal", and being able to identify which is which is a critical skill to develop.

Spreading a defending force thinly over a long frontage, with no reserve and no depth to the defense, is tactically unsound. Defenders must ensure that they have depth to their defense.

This depth allows for a number of things, as follow:

Mutual support occurs when positions are able to fire in support of other nearby positions. The ultimate goal of mutual support is to make it impossible for the enemy to attack one position in isolation - instead, they will always find themselves engaged by a supporting position, forcing them to attempt to attack both positions at the same time, which dilutes their efforts.

For instance, a frontal attack on one position may run into the flanking fires of a second position. Mutual support makes it very difficult for the enemy to concentrate on a single defensive position, because if they do so, they will be cut to pieces by the supporting positions.

Flexibility is a key part of a successful defense. Particularly when defending large areas, defenders can't hope to mass their defensive power all along the areas that can potentially be attacked. Flexibility is facilitated by a comprehensive understanding of the defensive position, the dispositions of friendly forces, and the creation of primary as well as secondary and even tertiary fighting positions. In an ideal situation, each defensive position has an alternate position to fight from, as well as "fall-back" positions which are deeper in the defended areas. Flexibility can also be enhanced by detaching a 'reserve' of players that will stay away from the forward defenses and wait to reinforce any area that may later need help.

Flexibility allows a defense to be able to:

To conduct a successful defense, one must be able to 'read' the terrain and integrate it into the defensive plans. Knowing the terrain allows for a commander to place his defenses in a fashion that will maximize the natural and artificial aspects of the environment in his favor. An experienced commander should be able to look at a section of terrain and see the positive and negative aspects of defending any given area. It is up to him to pick the best slice of terrain to defend and ensure that all subordinate leaders and units take maximum advantage of all the favorable aspects of said terrain.

Linear defenses are exactly what they sound like - friendly forces are arrayed in a line, perpendicular to the expected route the enemy will attack via. Linear defenses are used when the terrain favors such a defense - for instance, if terrain or obstacles such as minefields make it impossible for the enemy to bypass a given piece of terrain. A linear defense allows for friendly forces to mass firepower in one direction, with interlocking fields of fire and exceptional coverage. Linear defenses require that there are security elements posted on each flank, so that any attempts by the enemy to flank friendly positions will be seen and will be able to be reacted to. Linear defenses are also best against infantry, and weakest against any kind of mechanized enemy force which can potentially flank the position more easily than a foot-mobile force. The ideal linear defense is created such that flanking is not a viable tactic for the enemy - minefields are excellent for this, as is terrain that naturally chokepoints.

A perimeter defense can be established in any terrain. It is utilized when the enemy can be expected to attack from a number of directions at once, or when the enemy's attack direction is not known with reasonable certainty in advance.

Perimeter defenses take advantage of any natural concealment or cover in the area. They are typically established in a triangular fashion, though it will differ based upon the size of the force and the terrain. Platoon-sized perimeter defenses are best, as they allow for a larger area to be defended, with one squad per side. Squad-level perimeter defenses are vulnerable to attack and typically end up being more of a rough circular shape than triangular, due to there being a lower number of troops to place in the defense combined with the desire to utilize all cover and concealment to the maximum extent possible.

A reverse slope defense can be a very effective form of defense if done properly. The basic principle of a reverse slope defense is that terrain is used to isolate the friendly forces from enemy fires and observation, forcing them to close with friendly forces and commit to a close-range fight where they lose many of the advantages they may have otherwise had in normal terrain. 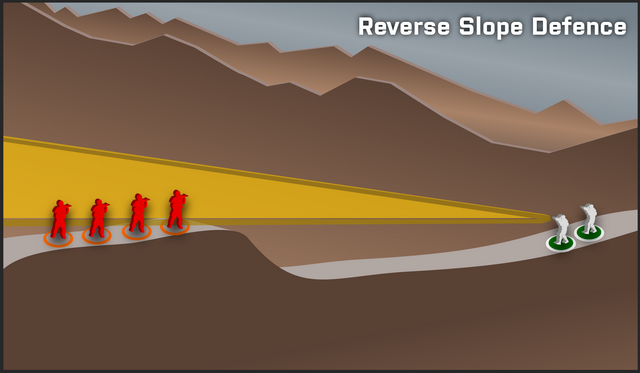 Some benefits of the reverse slope defense are as follows.

There are also a few notable drawbacks that can come into play and must be considered in advance.

It is important that a reverse slope defense utilizes observation posts on the far side of the hill or high ground so that they can see the approach of the enemy. These observation posts can simply be a few soldiers with binoculars or scoped weapons, spread out to comprehensively cover all possible approach routes. Such observation posts should be pulled in before the attack hits, or they're apt to be cut to pieces by the enemy.

The defense of a strongpoint can carry aspects of the perimeter or linear defense, depending on what the tactical situation is at the point being defended. Considerations for both of those defense types apply, as well as the following points.

The intent of a spoiling attack is to disrupt or "spoil" the plans of the enemy attacking force. This is typically done by the defending force by shifting from their defensive posture into an unexpected attack. If done properly the tactic can achieve an element of surprise which can contribute to the successful disruption or destruction of the enemy attacking force. Spoiling attacks are best done with armor - they can spring from their defensive positions, flank the enemy, strike hard and fast, and then withdraw back into their defensive posture.

Small infantry elements can also be used for this tactic, utilizing harassing fires via guerrilla ambushes. Done effectively, this can create confusion and disarray and lead to a breakdown in the cohesion of the enemy attack.

Spoiling attacks are only feasible if the you have the assets to spare. In many situations it will be too risky to attempt one and potentially lose those forces.