A firefight is simply a combat engagement between two opposing forces where fire is exchanged - often between infantry, though vehicles can become involved. Firefights are the building blocks that make up large-scale battles.

The point of our platoon is to seek out and destroy the enemy. To do this, we must engage in combat with them, resulting in a firefight or series of firefights that determines the success or failure of our mission. Having a good understanding of the dynamics of such a fight is important for all players to have, as it allows for the entire platoon to intuitively understand the battlefield situation and adopt to it as necessary to win the fight. 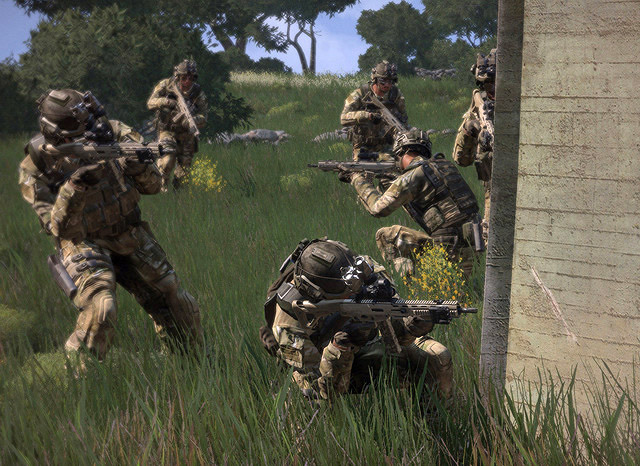 Goals in a Firefight

The US Army used a mnemonic called "The Four F's" to describe the goals that are worked towards in a firefight - simple to remember, easy to understand, succinct, and right to the point. (For those curious, the modern version is Find, Fix, Finish, Follow-Through.) These "Four F's" are the foundation of a successful firefight in Arma 3. Let's discuss what each of them means so that we can establish the basic principles that will guide a team towards success in combat.

Finding the enemy without them knowing about you gives you initiative, and initiative will allow you to fight the enemy on the most favorable of terms, maximizing the shock of your attack, maximizing their casualties and confusion, and minimizing their ability to retaliate effectively. Finding the enemy can be facilitated through application and understanding of the following techniques. The following aspects are relevant before fighting has started - once the shooting starts, the "React to Contact" Battle drill begins, and the final three "F's" start happening.

The point man should be someone who is proficient, alert, and will have a good chance of spotting the enemy before it is too late. A point man should try to position himself fifty or more meters ahead of the formation. This buffer allows for the rest of the element to have freedom to maneuver if the point is engaged. Bear in mind that a point element can be more than just one man. For instance, a platoon moving as an organized body may have an entire fireteam acting as point, with another fireteam on each flank, and the two other squads in the center of the formation.

The goal of recon is to gather information about the enemy through the proper and skilled application of stealth and observation. Recon assets attempt to find out things like:

Recon elements can come in a variety of forms. The most common recon assets are as follows:

Good reconnaissance is the most reliable and effective way of finding the enemy. It is critical not only when in the attack, but also while in the defense and in general "movement to contact" situations. The more you know about the enemy before the firefight starts, the more likely you will be able to maneuver and plan to fight in a way that will maximize your strengths and minimize their ability to resist.

Stealth is an important part of finding the enemy before they find you. At the higher level, this means that movement plans should be made that do not put friendly forces in exposed and obvious areas or avenues of approach. At the individual level, stealth is accomplished by using good tactical movement techniques. Moving from cover to cover or concealment is one aspect of that. Being able to read the terrain and pick covered approaches to the enemy, or their flanks, is another aspect.

The platoon's ROE, or rules of engagement, go hand-in-hand with stealth. There will be times when the enemy is spotted by friendlies without the enemy ever knowing it. If the first person to see the enemy starts blasting away with their rifle, the net effect will be far less than what could happen if the contact was instead communicated up the Chain of Command and the platoon could be shifted to conduct a hasty ambush or otherwise react in a deliberate and calculated fashion that would stack the odds in friendly favor as much as possible before the first shots are ever fired.

Finally, the last major points of finding the enemy involve situational awareness and security. The enemy will not always be where they're thought to be, and even if the bulk of them are, there's always the chance that enemy recon elements or ambush elements will be roaming away from the enemy's known position(s). There's also the possibility that friendly forces and enemy forces will pass each other or come into close proximity of each other unknowingly, in which case proper situational awareness and security may be the only thing to prevent a bloody and unexpected exchange of fire.

Everyone must be scanning their sectors diligently. When halted, units must maintain flank and rear security, regardless of whether anyone has explicitly told them to.

When movement is being conducted, a deliberate effort must always be made to maintain rear security. It is far too easy to get lulled into complacency regarding rear security - too often one will think that just because they moved through an area, that they own it. This is never true - the only ground that is ever 'owned' by an infantry unit is the ground they are currently on, and even that can be contested. Dropping security at the wrong time can result in entire teams being wiped out by skilled and cunning enemy scouts, ambush parties, or vehicle crews.

After the enemy has been found, and leaders have maneuvered friendly forces to the most advantageous positions possible in the time available, the act of fixing the enemy begins.

Methods for Fixing the Enemy

As with suppressive fire in general, the volume has significance, but the more important aspect is in making the enemy think that movement, popping up to shoot, or relocating will result in them being shot. If you cannot make the enemy think this, you haven't truly suppressed them. While they may be "fixed" in to the extent that they can't leave their position, they may be ready to fight any flanking forces regardless. Suppression is a key element of fully fixing the enemy and must be achieved. for the next "F" to have the most chances for success.

The next part of a firefight occurs when the enemy has been fixed enough that a flanking maneuver can be carried out. Flanking is a means by which friendly forces maneuver to a known or suspected point of weakness in the enemy position and exploits it via an assault. It is done when the tactical situation - terrain, enemy disposition, friendly manpower, et cetera - favor it. Flanking typically is less costly than outright frontally assaulting the enemy, and forces the enemy to split their fires between a maneuver element and a base-of-fire element, diluting their effectiveness.

What is required to flank the enemy?

Carrying out the Flank

Once the decision has been made, a portion of friendly forces are split off to conduct the flank attack. The route used is conveyed to the elements staying behind to provide suppression - known as the base-of-fire element - so that they know to expect friendlies in that area and place any fire there with great caution. Flanking teams can be as small as a fireteam. If the enemy is properly fixed by the base-of-fire element, it may not take many flank members to roll up on the enemy's flank and chew them apart from an unexpected angle.

Ultimately, the decision for how many people are needed in the flank/assault team is up to the on-scene leaders. It is a balancing act between maintaining proper fixing fires, and having enough people in the assault force to ensure success.

While conducting a flank, the flanking team attempts to do everything in their power to remain undetected by the enemy. They move quickly, with the maximum stealth, and attack with speed, intensity, and violence of action upon working onto the enemy's flank. The shock of their attack, combined with the demoralizing effects of the base-of-fire's suppression, is a killer combination.

Finishing the enemy is the responsibility of the flank team primarily. Once they have closed on the enemy flank and have begun to assault enemy positions, the base-of-fire element is forced to shift fires away from the main objective to prevent hitting their own people. Note that with good coordination, a base-of-fire team can shift fires along an objective to coincide with the advances of the assault team, putting fire onto each position before the assault team gets to it, and then shifting deeper into the enemy positions as the assault teams continue to advance. This is best done when the flanking team is coming in perpendicular to the enemy position, as seen from the base-of-fire position, and when good comms are maintained between both elements.

Finishing the ultimately requires ensuring that absolutely every last enemy combatant in the area is rendered harmless, and that all possible hiding places have been searched and secured.

Finally, the firefight is finished when the enemy has been defeated and friendly forces have regrouped, established security, tended to any casualties received, redistributed special gear, dealt with any prisoners or enemy wounded, and are ready to continue on with their mission.

Transitioning out of the 'standard' firefight

While the "Four F's" describe the typical evolution of a firefight, there are times when a firefight can change into an all-out assault, defense, or withdrawal and break out of the "Four F's" structure. Knowing how, when, and why these transitions can be or should be made, as well as their weaknesses and keys to success, is important to being able to make the tactical decisions required to set them in action.

Assaulting occurs as a result of several events that can happen in a firefight.

Methods to conduct an assault

Assaults are carried out via fire and maneuver or fire and movement, as the tactical situation dictates.

Weaknesses in transitioning to assault

The primary weakness when transitioning into an all-out assault lies in underestimating the enemy, miscalculating their strength, or otherwise being unaware of some facet of them that can put the assault in jeopardy. Good recon, good security, and sound tactical judgment are the best methods by which to prevent any of these eventualities from impacting an assault.

Transitioning into a defensive posture can occur as a result of several events in a firefight. Some of the reasons are as follows.

Why a Firefight Can Transition Into a Defensive Action

Once the decision has made to go defensive, leaders must communicate the extents of the defensive position, sectors of observation and fire for each element, and ensure that security is established and maintained. All friendly forces assume the best covered and concealed positions they can, orienting towards known enemy positions, likely enemy avenues of approach, and staying very alert for enemy flanking maneuvers.

Note of course that going defensive is not in and of itself a permanent thing. If desired and feasible, a defense can shift back into a normal firefight, an assault, or even a disengagement. 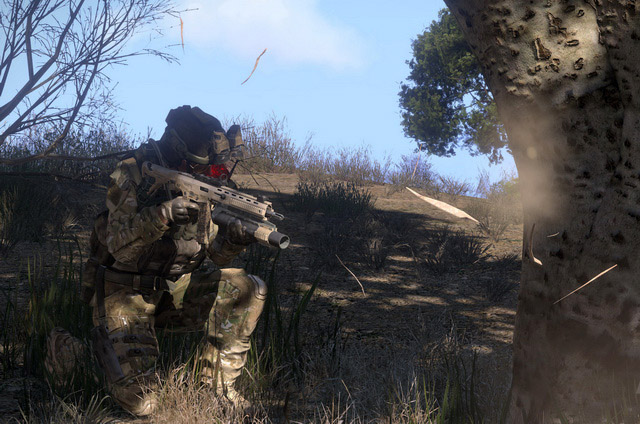 Disengagement is the art of breaking contact from the enemy in a deliberate, organized fashion. Disengagement can occur in reverse - known generally as a 'fighting withdrawal' - or in any other direction, based on the situation at hand. Disengaging with the enemy is ultimately intended to either further mission goals or put friendly forces into a more tactically advantageous position from which they can better deal with enemy forces.

Why a Firefight can turn into a Disengagement

The most important aspect of disengaging from the enemy is ensuring that it is done in a deliberate and organized fashion, in which fire is maintained on the enemy throughout the disengagement process, with the intent of suppressing them as well as discouraging their pursuit. Simply trying to run away is apt to end in dismal failure.