When moving with infantry/as rolling cover

When cavalry is supposed to move together with infantry, it is cruical that they match the infantries speed. For this, they can simple set their speed-limiter with Delete. The infantries speeds based on their stance can be found here: https://unitedtaskforce.net/training/sop/basic-infantry/employing-basic-formations

One of the defining attributes of armor when in support of infantry is the ability for it to stand off from the battle and deliver accurate fires from beyond the effective range of the enemy. This can be brought to bear with infantry by providing overwatch of infantry elements as they move to contact. An armored vehicle can suppress the objective with machinegun fire, take out fortified positions with cannon fire, and provide immediate accurate fire upon any threats that might emerge to oppose the infantry. This allows for the infantry to rapidly move up to the enemy positions with the minimum of risk.

Having an armored vehicle many hundreds of meters away from suspected enemy positions also helps to lessen the likelihood of enemy anti-tank gunners being able to engage the armor. This comes most into play with unguided anti-tank rockets like the RPG-42; guided weapons tend to have much longer effective engagement ranges and are not as easily defeated by range. In short, armor is much more effective against infantry at a distance than infantry are against armor at a distance. Take advantage of this at all times, and especially when providing support to dismounted infantry elements.

Breaching a wall with the help of an armored vehicle is a good way to surprise defending enemy forces and give your infantry a fighting chance. Typical enemy defenses focus on natural "choke points" such as a central entry to a compound that is otherwise walled off. Breaching a wall in an unexpected place and attacking through the breach is an excellent way to catch the enemy off guard and destroy them before they can shift their defenses.

The process for breaching with any armored vehicle is fairly simple.

Bear in mind that walls can also be breached with cannon and machinegun fire. HEAT rounds from tanks will flatten walls, while a box of .50cal bullets will crumple some as well. Note too that "prepping" a breach point with .50cal rounds from an APC can soften up a wall and make it easier to breach. When breaching a wall from a stand-off location via cannon or machinegun fire, the breach vehicle simply ensures that no friendly forces are within a danger radius of the breach point. Once that is confirmed, they direct fire onto the breach until it opens, at which point they shift fire to allow the infantry to storm in. 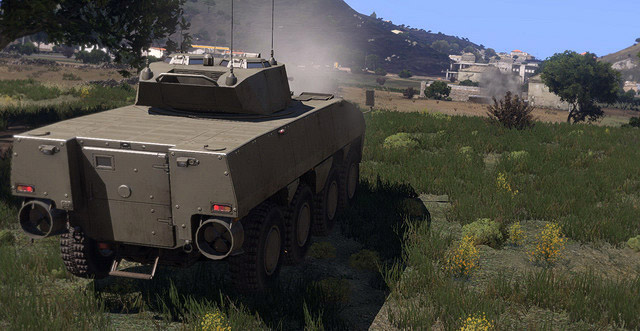